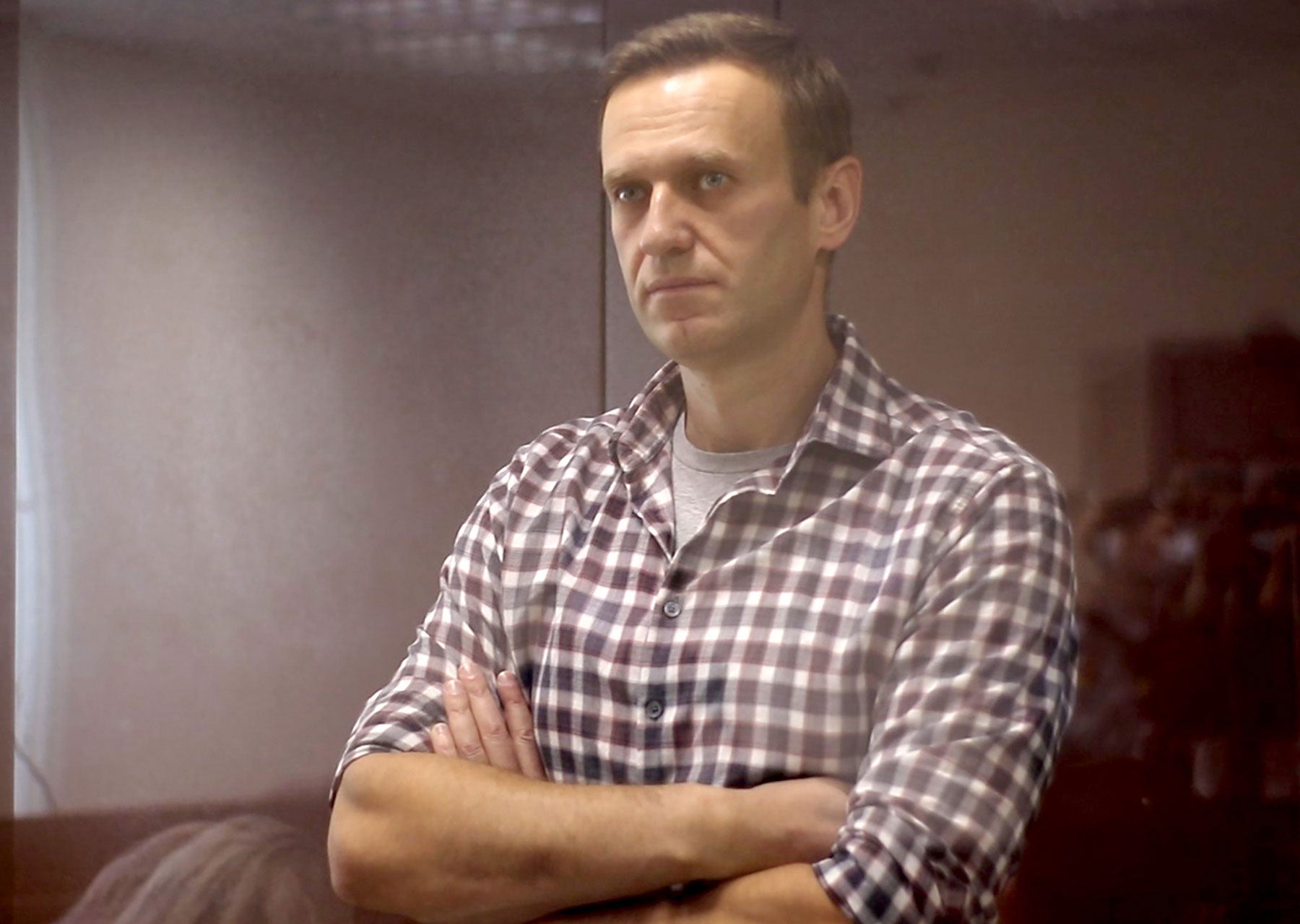 MOSCOW, RUSSIA - FEBRUARY 20, 2021: Russian opposition activist Alexei Navalny during an offsite hearing of the Moscow City Court into his appeal against the court ruling to convert his suspended sentence of three and a half years in the Yves Rocher case into a real jail term, at the Babushkinsky District Court. Video screen grab/Moscow City Court Press Office/TASS A STILL IMAGE TAKEN FROM VIDEO PROVIDED BY A THIRD PARTY. EDITORIAL USE ONLY (Photo by Moscow City CourtTASS via Getty Images)
by: Anna Chernova, Zahra Ullah, Matthew Chance and Zamira Rahim, CNN
Posted: Mar 26, 2021 / 08:39 AM EST / Updated: Mar 26, 2021 / 08:39 AM EST

(CNN) — Russian opposition figure Alexey Navalny is suffering acute back pain which has affected his ability to walk and his condition is being exacerbated by alleged “torture by sleep deprivation,” his legal team said Thursday.

One of Navalny’s lawyers, Vadim Kobzev, tweeted Thursday after seeing his client that the activist was not being treated properly and that a “deliberate strategy is underway to undermine his health.”

Navalny is imprisoned in penal colony No. 2 in Pokrov, in the country’s Vladimir region, where one former inmate told CNN of harsh conditions inside.

According to Kobzev, Navalny has complained of acute back pain for four weeks and has not received any medical assistance. This has led to a complication and resulted in one of his legs essentially not functioning, the lawyer said.

“All this, naturally, led to the fact that a complication began and now he has lost sensitivity in his right leg, he has sharp pains, the leg stopped working and at such a rate he will need crutches,” Kobzev said.

On Thursday, the Russian Federal Penitentiary Service (FSIN) said that he and other prisoners in the Vladimir region received medical examinations on Wednesday at the inmates’ request, according to state media outlet TASS. Navalny is “in generally good and stable health,” the FSIN statement said.

He has made two applications to Russian prison officials asking for access to the doctor of his choice and an end to the practice of waking him repeatedly at night. His lawyers published the documents online Thursday with an accompanying message that said: “We demand that the doctor’s access to Alexey be immediately ensured, that his treatment should be started, and the torture by sleep deprivation should be stopped.”

In his requests, Navalny said his condition had worsened and that “severe pain has spread to my right leg which has lost sensation from the calf downwards.”

“I’m having difficulty walking. A classical development of a disease associated with a pinched nerve in the absence of proper treatment can be observed,” he said. Navalny asked that the prison “give me the opportunity to undergo the treatment recommended to me by the specialist A.N. Barinov.”

Later on Thursday, in a YouTube livestream, Leonid Volkov, Navalny’s chief of staff, said his legal team planned to visit Navalny every day due to concerns over his health.

However, the Kremlin dismissed her plea. “We will not respond to this appeal,” Kremlin spokesman Dmitry Peskov said in a conference call with journalists Friday. “Now when this citizen is a convict and a prisoner of a colony, the addressee for such appeals is the Federal Penitentiary Service,” he said.

An outspoken government critic and anti-corruption crusader, Navalny has long been a thorn in Putin’s side, prompting concerns for his safety in the country. The activist nearly died after he was poisoned with the Novichok nerve agent last August.

A joint investigation by CNN and the group Bellingcat implicated the Russian Security Service (FSB) in Navalny’s poisoning. Russia denies involvement, but several Western officials and Navalny himself have openly blamed the Kremlin. Navalny returned to Russia in January from a five-month stay in Germany, where he had been recovering.

Kobzev said a prison neurologist examined Navalny last Friday but the “diagnosis and results of the examination are still unknown.”

No indication has been given of what caused Navalny’s back pain but his lawyer said his deteriorating condition was exacerbated by the prison authorities waking him up multiple times a night due to the anti-corruption activist being labeled a flight risk, despite a camera monitoring his bed.

“In recent days, Navalny has been given 2 tablets of Ibuprofen a day, which, of course, is a clear mockery. All this is greatly complicated by the fact that he is actually tortured with sleep deprivation: 8 times a night he is woken up for ‘preventive monitoring,’ although the video camera is already hanging right above his bed,” Kobzev tweeted.

Kobzev said the opposition leader did not want to publicize his medical difficulties but after members of his legal team were denied access to him Wednesday for a pre-scheduled visit, they chose to make the situation public.

Navalny was jailed earlier this year for violating the probation terms of a 2014 case in which he received a suspended sentence of three and a half years.

A Moscow court took into account the 11 months Navalny had already spent under house arrest as part of the decision and replaced the remainder of the suspended sentence with a prison term last month.

Kobzev stressed on Wednesday that it was crucial for Navalny’s lawyers to meet him to check on his well-being.

“We believe that, first of all, we must see him, and secondly, he needs to be examined by a normal civil specialist who will diagnose and will prescribe the treatment that he can undergo,” he said, adding that at least one of the activist’s lawyers see him every day.

Maria Pevchikh, head of Navalny’s anti-corruption fund investigations unit, took to Twitter to voice her concerns about his health.

“FSIN said that Navalny had undergone a medical examination in the colony and his health was found to be ‘satisfactory,'” Navalny’s press secretary Kira Yarmysh tweeted. “In Omsk they also said so,” she added, referencing the time when Navalny was in a coma following his poisoning in 2020.