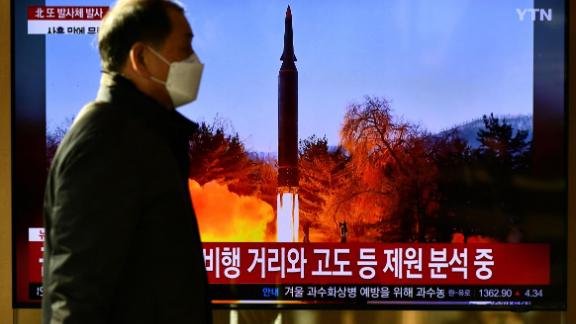 (CNN) — North Korea on Friday test-fired what are presumed to be two ballistic missiles from a rail car, according to state media.

The test comes after North Korea said it successfully test-fired a hypersonic missile on Tuesday, the second alleged test of such a weapon by the Kim Jong Un regime within a week and the third since New Year’s Day.

Friday’s test drill was used for “checking and judging the proficiency” of the “railway-borne missile regiment of North Phyongan province,” the Korean Central News Agency said.

This is not the first time North Korea has launched missiles from a rail car. It conducted a similar test last September.

The test launches were supervised by commanding officers of the Korean People’s Army and leading officials of the Academy of Defense Science, according to KCNA.

“The regiment received a firepower mission at short notice from the General Staff in the morning on Friday before swiftly moving to the firing ground, and precisely struck the set target in the East Sea of Korea (also known as Sea of Japan) with two tactical guided missiles,” KCNA said.

The military suspects the projectiles had a flight distance of about 430 kilometers and an altitude of about 36 kilometers, JCS said in a statement, adding that intelligence authorities of South Korea and the United States are analyzing further details.

A day after the Tuesday test, the United States announced sanctions on eight North Korean and Russian individuals and entities for supporting Pyongyang’s ballistic missile programs.

On Friday, a North Korean Foreign Ministry spokesman admonished the United States for its posture against North Korea’s weapons development, adding, “If the U.S. adopts such a confrontational stance, the DPRK will be forced to take stronger and certain reaction to it.”

In a statement carried by KCNA, the spokesman defended the country’s right to bolster its arms, saying its “recent development of new-type weapon was just part of its efforts for modernizing its national defense capability.”

Leif-Eric Easley, associate professor of international studies at Ewha Womans University in Seoul, said after Friday’s test that Pyongyang “appears to be signaling it will not be ignored and will respond to pressure with pressure.”

“North Korea is trying to lay a trap for the Biden administration,” Easley said. “It has queued up missiles that it wants to test anyway and is responding to U.S. pressure with additional provocations in an effort to extort concessions.”

Pyongyang is barred from testing ballistic missiles and nuclear weapons under international law, but it has continued developing the weapons in violation of that.

U.S. Secretary of State Antony Blinken on Friday showed no signs of compromise from Washington.