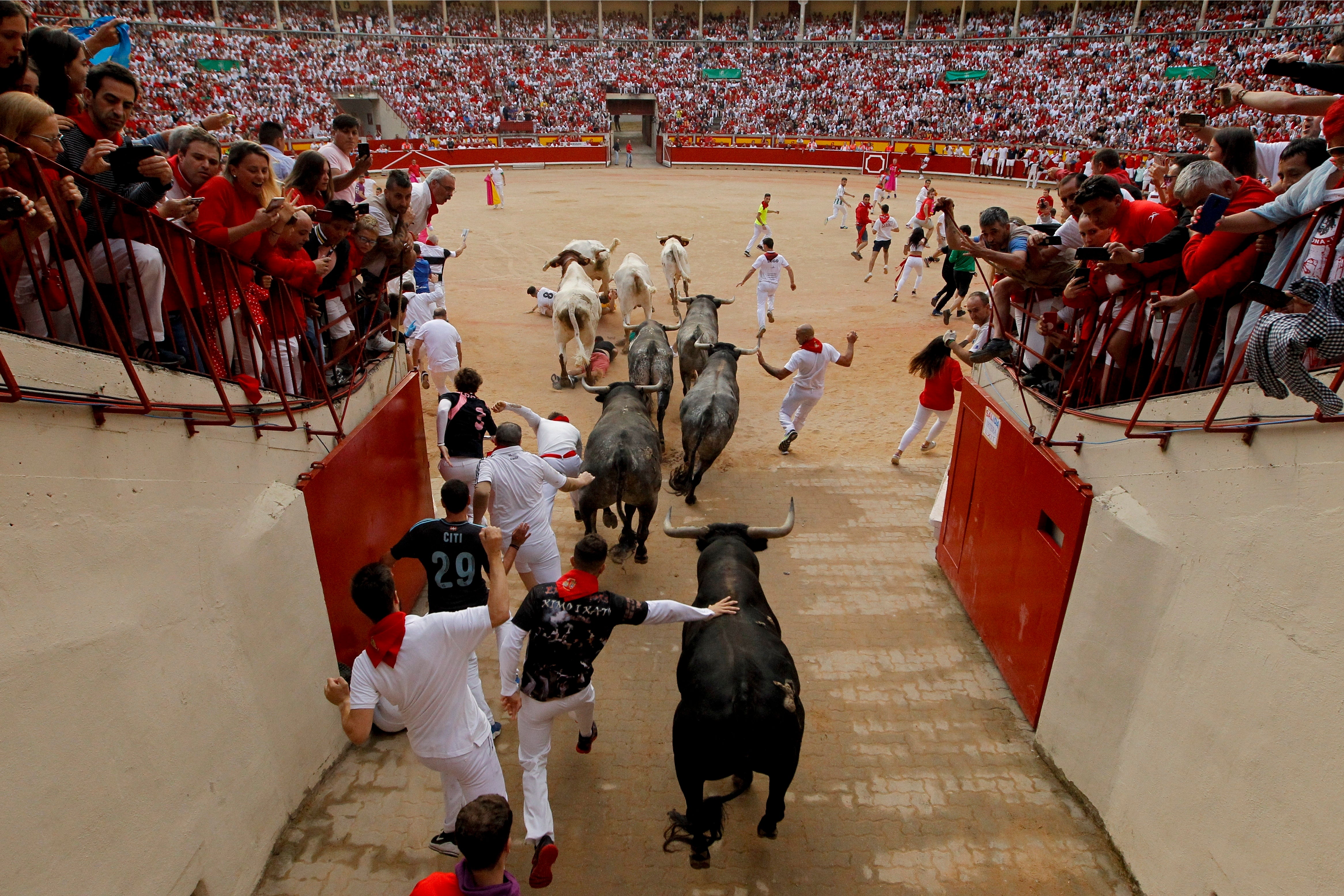 Revellers and fighting bulls arrive at the bullring during the running of the bulls at the San Fermin Festival, in Pamplona, northern Spain, Sunday, July 14, 2019. The San Fermin fiesta made internationally famous by Ernest Hemingway in his novel "The Sun Also Rises" draws around 1 million partygoers each year.(AP Photo/Alvaro Barrientos)
by:
Posted: Jul 14, 2019 / 05:49 AM EST / Updated: Jul 14, 2019 / 06:02 AM EST

PAMPLONA, Spain (AP) — A bull broke from the pack and gored two Australians and a Spaniard during Sunday’s final bull run of this year’s San Fermin festival, health officials from the northern Spanish city of Pamplona said.

That took the number of gorings to eight for the eight bull runs that provide a high-adrenaline morning rush to the non-stop party that draws around 1 million people each year.

While five of the bulls stayed in a group Sunday and charged through the twisting streets with their guiding steers, one bull drifted back and provoked havoc in the crowds of runners. The bull flipped one man over its horns and slammed him onto the cobblestone street. It then clipped another two runners who were trapped against a wall.

Regional hospital spokesman Tomás Belzunegui said the man who had been tossed by the chocolate-colored bull named Rabanero was gored in the leg, while another man was gored in the right arm and a third in the armpit. The hospital said the wounds were not life- threatening.

The Red Cross reported several other injuries from knocks received from the bulls and steers, or from runners tumbling out of the way.

The six bulls from the Miura breeder, who celebrated the farm’s record-extending 53rd showing at the festival, completed the 930-yard (850-meter) run to the bull ring in 2 minutes, 42 seconds. They will be killed at the ring later Sunday.

The San Fermin fiesta was made famous internationally by Ernest Hemingway in his 1926 novel “The Sun Also Rises.” Most revelers stay up all night or rise early enough to gape from balconies or barricades as hundreds of runners dressed in the traditional white outfit with a red sash make their mad dash.

Sixteen people have died in the bull runs since 1910. The last death occurred in 2009.

Animal rights protesters have also become a fixture in Pamplona. On the eve of this year’s festival, dozens of semi-naked activists staged a performance simulating speared bulls lying dead on Pamplona’s streets to draw attention to what they see as animal cruelty for the sake of entertainment.

Bullfights are protected under the Spanish Constitution as part of the country’s cultural heritage.