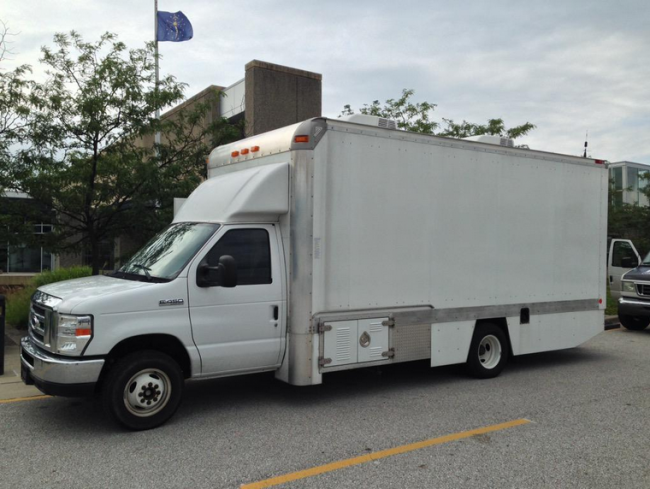 INDIANAPOLIS (WISH) – Indiana State Police gave an inside look at their mobile forensic lab, where examiners dissected electronics and other evidence during the Jared Fogle investigation.

It’s a truck trailer with a technological touch. From the outside it’s plain and white, but step inside and there’s more that meets the eye.

The back of the trailer has tables attached to the side walls. That’s where four examiners can analyze different electronics and storage devices like thumb drives, computers, hard drivers, laptops, DVD’s and more.

Many of those items were taken from Fogle’s home and the home of the former director of his foundation, Russell Taylor. The lab would be parked directly outside their homes, allowing investigators to immediately search through the electronics.

“At the same time it allows in a seperate location for individuals to be interviewed by investigators and keep those two things coordinated but separate,” said Lt. Chuck Cohen, Commander of the Cybercrime & Investigative Technologies section for the Indiana State Police. The other room he mentioned has three chairs, two for investigators and one for the interview subject who could be a suspect, victim or witness in a case.

The two rooms in the lab work in unison. For example, an investigator can download a picture off of a hard drive, print it, then immediately bring it to the interview room and question the subject about it.

“Sometimes we’ve had to produce redacted images where the contraband is removed and ask the victim ‘Is this you in this picture? Was this you asleep when someone took this picture or took this video?’ to help corroborate that,” said Lt. Cohen.

The interviews are recorded on video. A copy of the interview is then given to the prosecutor on the case as well as the attorney for the defendant if necessary.

The point of the mobile forensic lab is to cut down on time. Rather than bring the evidence to a lab off site, it brings the lab to the evidence.

“It allows us both to collect evidence as quickly as possible and to exclude devices and items that may not be of evidentiary value,” he said.

Lt. Cohen said ISP bought its first mobile lab in 2006 and was the first law enforcement agency in the country to have one.

And when combined with the hard work FBI agents, detectives and forensic examiners, justice has a higher chance of being served.

“In Indiana, we’re fortunate because we have this capability,” said assistant to the U.S. Attorney’s Office Steve Debrota. “If Mr. Fogle had lived in a lot of other places in the country we wouldn’t be having this conversation.”

Lt. Come said the lab is deployed about 100 times a year whenever there’s a case involving computers or electronics. That can range from child pornography investigations to even murders.

“We need to understand that there’s a time value of evidence, particularly as people do things like move to cloud computing,” he said. “What we want to prevent is the ability for someone when they find out they’re under investigation to destroy evidence by going to a cloud storage site, by going to social media and deleting evidence. So we want to be able to preserve that evidence as quickly as possible.”

Lt. Cohen added that the mobile lab also gives them a safe work environment since there are times they’ll go to a home that’s dangerous or unkempt.

ISP has two mobile labs. One is based in northern Indiana, the one used for the Fogle and Taylor is in Indianapolis. They hope to buy a third to be stationed in southern Indiana.