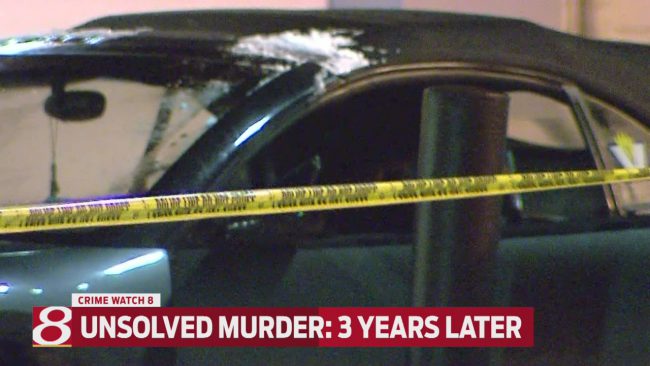 LAWRENCE, Ind. (WISH) — When Joe and Cyndi Jobin talk to their son, they can’t hear him talking back.

“Happy New Year,” Joe said Wednesday, standing over his son’s grave. “We miss you so much.”

Kyle Jobin is not there to wipe away their tears or cheer them up with a joke at the Washington Park East Cemetery.

Wednesday marked exactly three years since the day the Jobins describe as the worst of their lives.

On Jan. 4, 2013, 19-year-old Kyle Jobin was home from Vincennes University on winter break, playing video games with his friends.

He drove to the Marathon gas station on East 56th Street near Interstate 465 to get some cigarettes around 2 a.m. Police said four people approached Kyle’s car outside the gas station. They stole his phone, and one of them shot him in the head.

Deputy Police Chief Gary Woodruff said police don’t have video of the crime and they don’t know where to find the killer.

A witness described the suspects as four people in their late teens or early twenties dressed all in black. Police tried to track Kyle’s stolen phone, but they say, as far they know, the thief never even turned the phone on.

The Jobins decorate their son’s grave with keepsakes from family vacations-trips they wish their son could join them for.

They don’t want anyone else to feel their pain.

“As a father, I just need to know that these people get what they deserve,” Joe said.