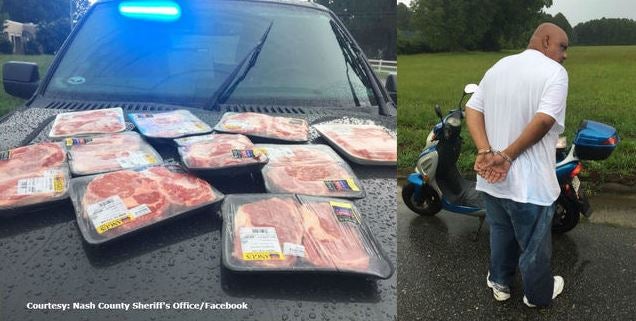 NASHVILLE, N.C. (WNCN) – A thief was busted with several steaks shoved down his pants legs while making his moped getaway in the pouring rain on Monday, Nash County, North Carolina deputies say.

Earlier, the man stole several steaks — worth more than $100 — from the Nashville Walmart, according to deputies.

Keith Jordan stuffed at least nine packages of steaks down both his pants legs, the Nash County Sheriff’s Office said.  He then walked out of the store without paying, according to officials.

Deputies posted photos on Facebook of the seized steaks along with Jordan and his moped.

“Neither snow nor rain nor heat nor gloom of night (keeps) Nash County Sheriff’s Office from apprehending a subject riding a moped in the pouring down rain for allegedly stuffing over a $100.00 worth of steaks down both of his pant legs and choosing not to pay on his way out the Nashville Walmart,” deputies posted with the photos on Facebook.