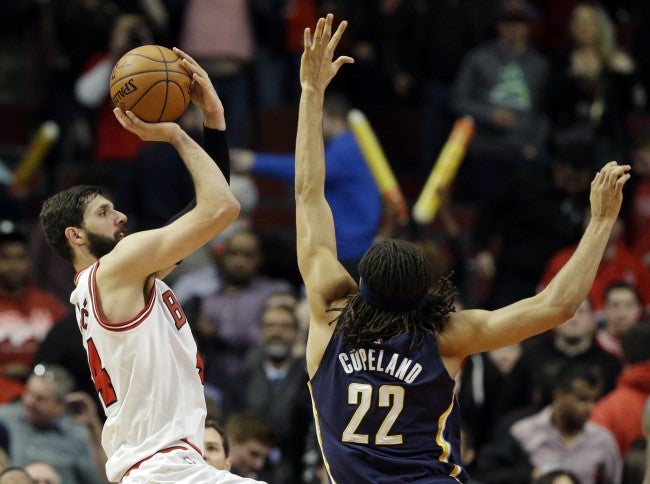 CHICAGO (AP) – Rookie Nikola Mirotic scored 20 of his 25 points in the second half, Mike Dunleavy added 21 points and Pau Gasol had 19 points and 12 rebounds to lead the short-handed Chicago Bulls to a 103-86 victory over the Indiana Pacers on Wednesday night.

Mirotic, who played 31 minutes off the bench, entered averaging 20.3 points in nine games in March. His previous best scoring month was the 9.9 points he averaged in December.

Solomon Hill had 13 points to lead six players in double figures for Indiana (30-37).

The teams split the season series 2-2. In the first three meetings, the Pacers held the Bulls to an average of 88.7 points on 37.5 percent shooting. But the Bulls broke through for 51 points in the first half Wednesday, led by Dunleavy’s 19 points on 5-for-7 shooting on 3-pointers.

Dunleavy had 10 points during a 14-2 run in the second quarter as the Bulls turned a one-point advantage into a 47-35 lead with just under three minutes left in the first half.

Chicago had a 51-41 halftime edge, and led 59-46 early in the third quarter before center Joakim Noah picked up three fouls in 23 seconds (for four total) and headed to the bench for the rest of the quarter. That sparked a 9-0 run by Indiana to close the gap to 59-55.

The Pacers got as close as three points – last time being 69-66 with two minutes left – but the Bulls ended the third with a 7-2 spurt for a 76-68 edge heading into the fourth.

Chicago opened the final quarter with a 6-2 spurt for an 82-70 lead and the closest Indiana could get was six points, at 86-80.

Pacers: Paul George, who broke a leg during a USA Basketball exhibition game over the summer, is practicing on a limited basis, but whether he’ll return this season is unclear. “It’s literally week to week and just see where we’re at,” coach Frank Vogel said. “If he’s not ready to play before (the playoffs), then he’s not ready to play. He might not play this year.” … Indiana center Ian Mahinmi left in the third quarter with a bruised forehead after he was inadvertently elbowed by teammate C.J. Watson.

Bulls: They remained short-handed Wednesday, but their health could improve significantly soon. Butler (sprained left elbow) and Gibson (sprained left ankle) are practicing and could return later this week. “Both are coming along well,” Tom Thibodeau said. “They’re getting closer, they’re going through practice fully, contact and everything, so hopefully it’ll be soon.” … The Bulls observed a moment of silence before the game for Jack Haley, a member of the 1995-96 team who died on Tuesday.