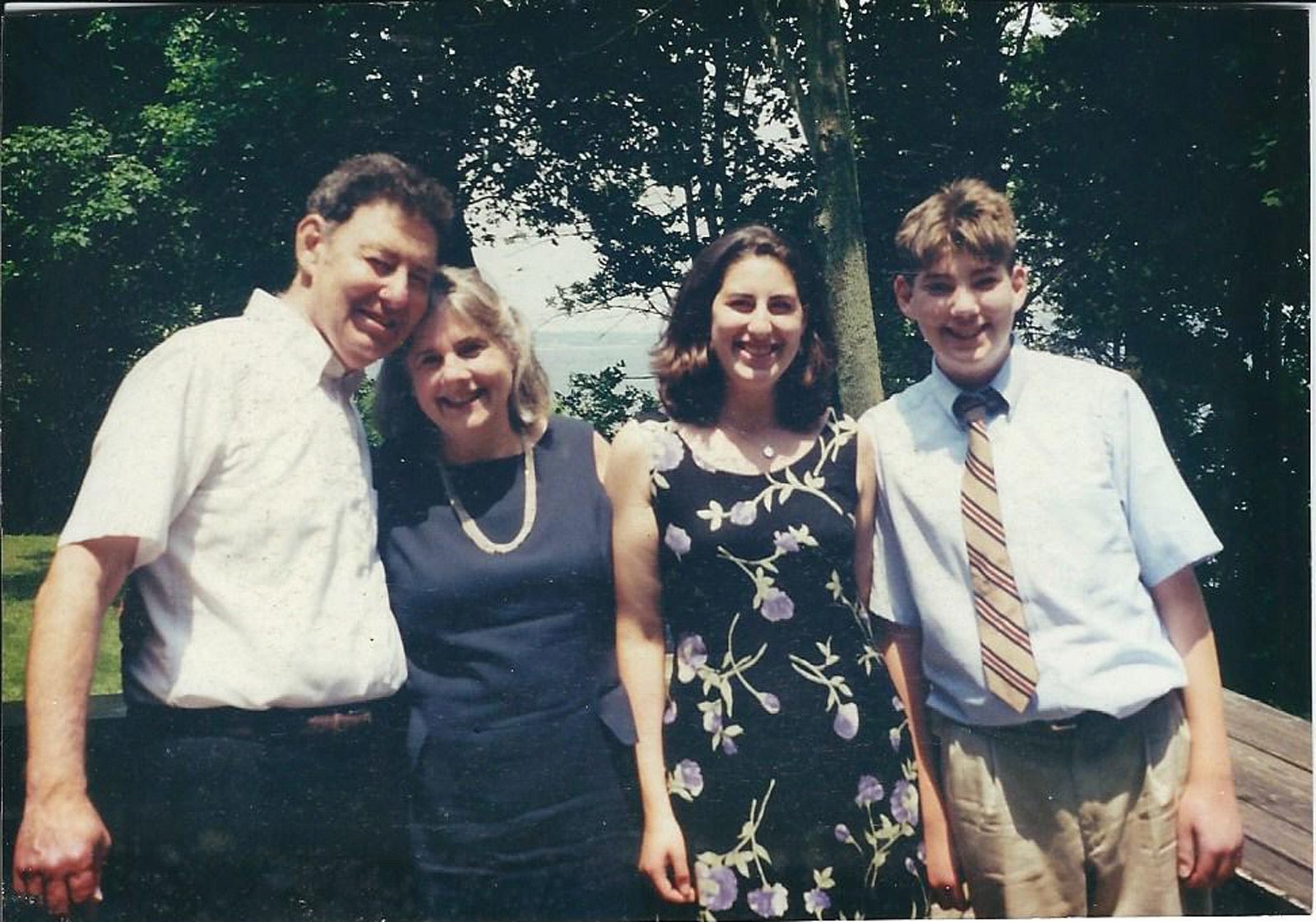 (CNN) — You know when you dig into a grapefruit and, suddenly, its juice squirts you in the eye?

There’s a word for it. Hello, orbisculate.

It’s a word that the Krieger family of Boston is trying to get into the dictionary in honor on their funny, whimsical dad. Neil Krieger passed away due to complications from Covid-19, and his family is taking a non-traditional approach to celebrating his life.

“I was trying to tell people about my dad and how he was really funny, creative and very original and always could see the humor and the bright side of the situation. I kept on coming back to the word orbisculate as a way to sort of capture that,” Hilary Krieger, Neil’s daughter, told CNN. “There’s something about creating this word that just felt like it captured him and it was really fun.”

The quest to get orbisculate into the dictionary is more about the journey than the destination, something her father would appreciate, Hilary said. It’s a fitting way to remember her dad — a former scientist — and find a way to be close to him.

Grief, loss, Covid-19 and the joy of a silly word are all coming together to unite people at a time of so much sad news.

While Hilary, 44, an opinion editor at NBC News and former CNN digital editor, and her brother, Jonathan Krieger, who runs a company that hosts virtual trivia nights, are busy with their work, the orbisculate project has given them a way do something positive for the world.

How can you not laugh when you hear it in a sentence?

“I made a mistake dressing up before I ate a grapefruit. It ended up orbisculating on my shirt and now I have to change,” Jonathan said, by way of example.

When Neil Krieger was a college freshman at Cornell University in the late 1950s, he was asked to make up a word for a class assignment.

Krieger, who later became a research scientist and started a biotech consulting company, loved the odd word so much he used it with his two kids and wife.

“Growing up in the household, I just assumed it was a real word,” Hilary said.

Hilary said she was taken aback when a college friend told her it wasn’t a real word.

They were eating oranges in the Krieger family home when they were in their 20s and Hilary said, “Oh, that orbisculated on you.” After he questioned the word, she added, “Orbisculate, you know, when fruit squirts on you.”

Embarrassed that her writer friend didn’t know this “fantastic word,” Hilary bet him $5 that it was in the dictionary.

“We opened up the dictionary and I could not believe that it wasn’t there,” Hilary said. “I was in such shock.”

She ran into her dad’s office after the word didn’t show up in the American Heritage Dictionary. Her dad met her with a “sheepish look” and explained that he had made it up.

Demoralized, Hilary left the room. But she kept using the word with her friends.

Hilary’s father tested positive for Covid-19 at the end of March 2020. He had chronic kidney disease and was undergoing dialysis. His family was terrified of what Covid-19 would do to him.

Upset, Hilary called her mom, Susan. Somehow, the only way her mom felt better about the test result was after talking to her husband.

Neil told his wife of 47 years that this was really a good thing, his daughter said. The hospitals were not at capacity and he had the best medical care in Boston.

After a month in the hospital, Neil was failing and his family came to his ICU room. Their father passed away the next morning, on April 29, of respiratory failure and complications due to Covid-19, according to medical records. He was 78 years old.

“We couldn’t be there at the end in the normal way, just all this stuff that makes the thing that’s the worst thing in your life even worse,” Hilary said.

The family had a small, private funeral, but it wasn’t how they wanted to remember him. They didn’t get to eulogize him or have a shiva, the Jewish tradition of inviting anyone who knew the mourners to stop by over seven days.

They planned to have a larger event for the one year anniversary of his passing, but it looks unlikely because of the ongoing pandemic. That has made the orbisculate project that much more important to the family.

“We really liked that it’s a sort of non-traditional way to honor somebody and to memorialize them and hope that other people will find ways to do that,” Hilary said.

It’s become a way to remember Neil Krieger’s legacy of being upbeat and always positive, his daughter said.

“It’s just fun, it’s light, and that’s something that I think people could use right now, as opposed to something that gets a bit more serious,” Jonathan, 35, said.

Getting a word into the dictionary is tougher than you might think.

Just because people are tweeting about the orbisculate project, or writing about it online, doesn’t mean that the word will get in.

The siblings are trying to get the made-up word into any dictionary, but it’s a long process. So far, it’s graced the online halls of Urban Dictionary.

The would-be word needs to be used in the common vernacular in multiple ways. If people are using it when they talk, and if the word is being used in different places, it makes it more likely that dictionary editors will consider adding it.

“If it was used in a book and a screenplay, and on the radio, that would make it more likely than if it was just used on one of those three platforms,” Jonathan said.

He has found some ways to have fun with spreading the word. The orbisculate website, part of the effort to admit the word into the dictionary, has a list of 50 goals to help get the word used in different places and to encourage people to have fun in these odd times.

So far, orbisculate has graced crossword puzzles, a comic strip, and it’s been engraved on a grapefruit spoon.

The siblings hope the word will be used in a song, preferably written by Lin-Manuel Miranda, or that some citrus-named celebrities will use it. Cue “CNN anchor Don Lemon, fictional 30 Rock character Liz Lemon, or Syracuse University mascot Otto the Orange,” the website says.

Or you can always sign the petition to get the word into the dictionary. About 500 people have signed it so far, according to Hilary.

The word is so visual that T-shirts showing what the word means, with a cartoon piece of citrus, are also for sale. All of the money is going to charity, the siblings say.

The $2,500 raised thus far is going to Carson’s Village, a Dallas non-profit that supports families who have suffered the loss of a loved one.

The Krieger family had the means to handle funeral arrangements and other issues in the wake of a loved one’s death, Jonathan said.

“For us, it was really hard. We can only imagine how hard it is for other people,” he said. “If this money could go to an organization that does help people in the aftermath of losing a loved one, we thought that would be something that would be really special.”

Somehow, the word orbisculate is connecting people with different reasons to love the squirty word.

Some people relate because their families have made up words. Others are simply logophiles. People have told the siblings that they lost their father, too, and there are some who are just happy to have some joy during the pandemic.

After reading all the headlines and seeing line graphs with death tolls, Jonathan wants people to remember that those who have died from Covid-19 deserve to be honored for how they lived.

“It’s important that we don’t let it be this number, and that we cut through that with the things that we remember and want to share with the world about people that we love, and that’s what keeps them alive,” he said.

For Jonathan and Hilary, it’s remembering that their father liked to celebrate the good and bad moments in life — again, he was all about the journey.

Their dad wasn’t one for accolades and awards, or even recognition, she said. Still, getting the word in the dictionary would be like the “icing on the cake,” Hilary said.

“I guess at some point, if you go online and you Google the word orbisculate and there it is, on a website or a major dictionary, and where it says its origin, it says that it was coined by Neil Krieger, that would be wonderful and just such a crazy way of seeing my dad live on,” she said.

When asked how her father would react to his kids trying to get his word in the dictionary, Hilary said he would laugh.

“He would definitely start laughing, there’s no question in my mind,” she said. “The fact that we want to do something fun and that we love this word and all that it says about how much we love and miss him would mean the world to him.”