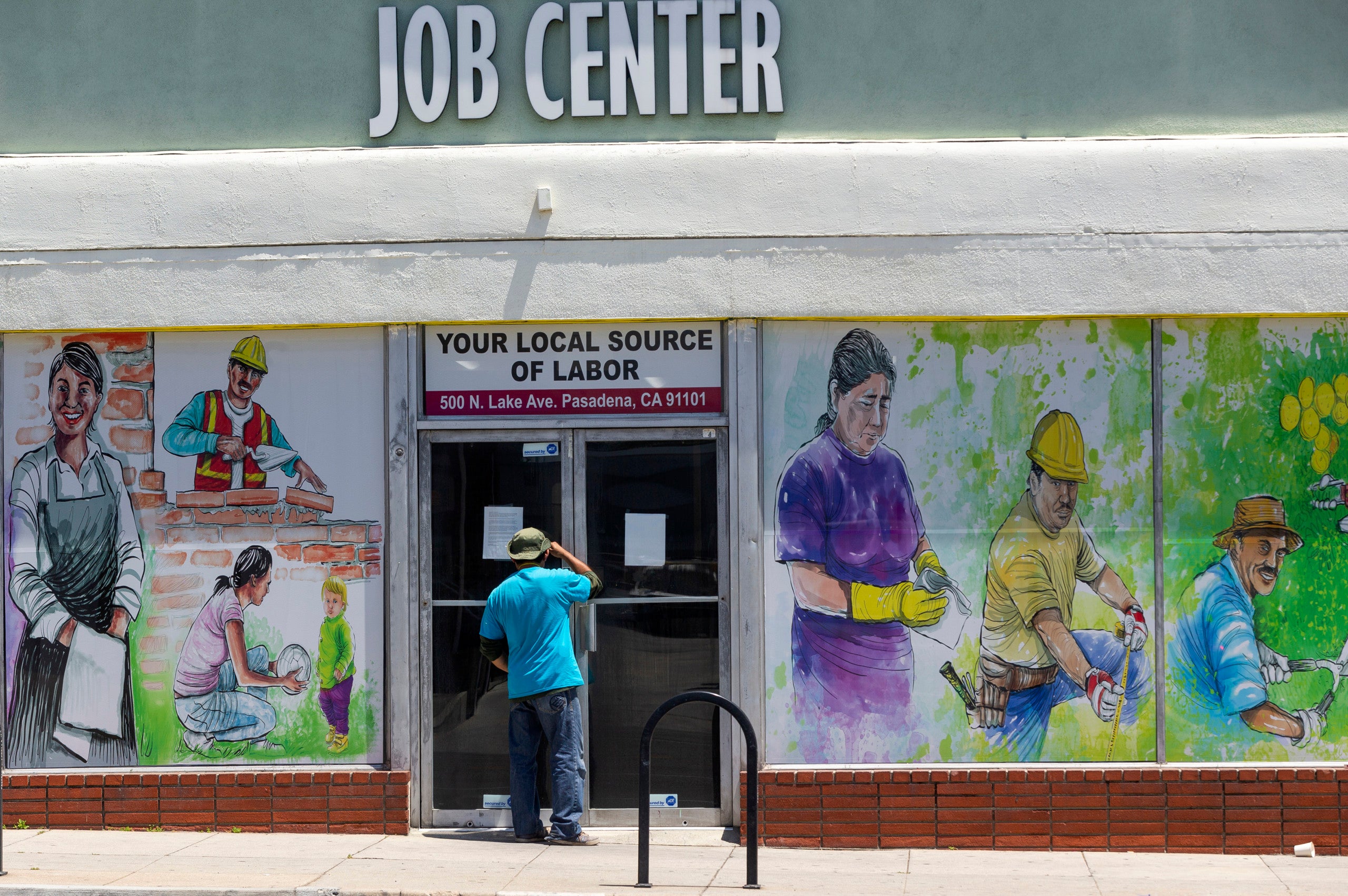 FILE - In this May 7, 2020 file photo, a person looks inside the closed doors of the Pasadena Community Job Center in Pasadena, Calif., during the coronavirus outbreak. California's unemployment rate continued to climb in May, reaching 16.3% as businesses continued to lay people off because of a state-at-home order aimed at slowing the spread of the coronavirus that has wrecked the state's economy. (AP Photo/Damian Dovarganes, File)
by: CHRISTOPHER RUGABER, AP Economics Writer
Posted: Jun 19, 2020 / 03:36 PM EST / Updated: Jun 19, 2020 / 03:36 PM EST

WASHINGTON (AP) — Employers added jobs in 46 states last month, evidence that the U.S. economy’s surprise hiring gain in May was spread broadly across the country — in both states that began reopening their economies early and those that did so only later.

As a whole, the figures illustrate the unusually broad nature of the recession, with all states enduring unemployment rates that soared in April as the coronavirus forced business closures and then generally fell in May but remained painfully high. During the 2008-2009 Great Recession, by contrast, some Midwestern states like Iowa and North Dakota managed to avoid high unemployment. Yet this time in May, Iowa’s unemployment rate was a high 10% and North Dakota’s 9.1%.

At the same time, the viral outbreak has sharpened disparities among the states, with Nevada, with its hard-hit tourism industry, and Michigan, heavily affected by auto job cuts, reporting jobless rates more than double the rates in states like Utah and Wyoming. The gap between the highest and lowest states is slightly worse than during the 2008-2009 downturn.

The virus and the accompanying shutdowns have devastated most states’ economies. Last month, four states recorded their highest unemployment rates on records dating to 1976: Massachusetts (16.3%), Delaware (15.8%), Florida (14.5%) and Minnesota (9.9%).

Even in Nevada there were some signs of life. The state gained nearly 33,000 jobs last month.

Justin Moscove, owner of seven Flowing Tide pubs, mostly in Reno and Las Vegas, said sales have been so strong that he’s rehired 95% of his 200 employees, even though he is limited to half his dine-in capacity. Still, he thinks much of the business reflects an initial surge from people tired of sheltering in place and may not last.

“I think a lot of people were sick of being cooped up inside for three months,” Moscove said.

Kamins also noted that the state-level data shows that both early-opening states and those that remained closed longer managed to post solid job gains and lower unemployment rates in May. Georgia, Mississippi and Texas, which reopened faster than other states, enjoyed solid hiring gains.

But so did New York, Michigan, and Massachusetts, which opened later than most other states. Hiring rose 5.2% in Michigan, the second-best job growth in the country in May, behind Vermont’s 6.4% gain. Michigan’s gain in part reflects the recall to work of many autoworkers last month. But the state also posted a sharp increase in construction jobs.

Montana and Pennsylvania each reported a job gain of 4%, the third-largest increase, though Montana allowed businesses to restart earlier than Pennsylvania did.

“The rush to reopen probably does not bear the sort of fruit that some of these states might have been hoping,” Kamins said.

Still, the outlook is cloudy for many small businesses. In Pennsylvania, Kelly Morgan reopened the four fitness centers she owns with her husband, Dave, several weeks ago, in defiance of a state closure order that wasn’t lifted until early this month. Her Morgainz Fitness gyms are still limited to a reduced capacity.

“It’s literally like someone dropped us in a hole for two months, and we’re going to spend the next year climbing out of it,” Morgan said.

Nationwide, employers added 2.5 million jobs in April, an unexpected gain that suggested that the job market bottomed out in April and is gradually recovering. Still, the number of people applying for unemployment aid has remained stubbornly high in the past several weeks, a sign that many businesses are still shedding jobs and clouding the outlook for jobs.

Jared Saigh, who lives in Iron River, Michigan, in a northern corner of the state, saw his career path upended by the coronavirus. After months of unemployment beginning last year, the 27-year-old Saigh was offered a job as a foundation director at a hospital in mid-March.

At first, the offer was just delayed. But as the crisis dragged on, it was eventually rescinded.

“It was a perfect job for me,” he said. “Now I just feel kind of stalled.”

And in Georgia, whose unemployment rate tumbled to 9.7% from 12.6%, some small business owners aren’t sure they’re in the clear yet.

One of them is Kimberly Schoon, who owns a children’s shoe store in the Atlanta suburb of Decatur. Her employees — one full time and five part time — were laid off or quit when she was forced to shut down in April.

Schoon reopened for in-store sales last month and has since rehired the full-time employee and has advertised for a second employee, who could be a full- or part-time worker. In the first 24 hours, she received 75 applications.

Still, she isn’t sure sales will be robust enough to support two full-time employees. Schoon has noticed a change in consumer behavior, with parents cutting down on frills.

“Parents are buying functional and functional only,” she said. “I’m not going to be doing a whole lot of the fun, frilly stuff any more.”

Schoon received a $17,000 loan from the government’s new Paycheck Protection Program for small businesses and is hoping her sales can pick up. Still, she’s nervous about $40,000 in back rent she still owes.

“That’s a lot of shoes to sell to pay this back,” she said.