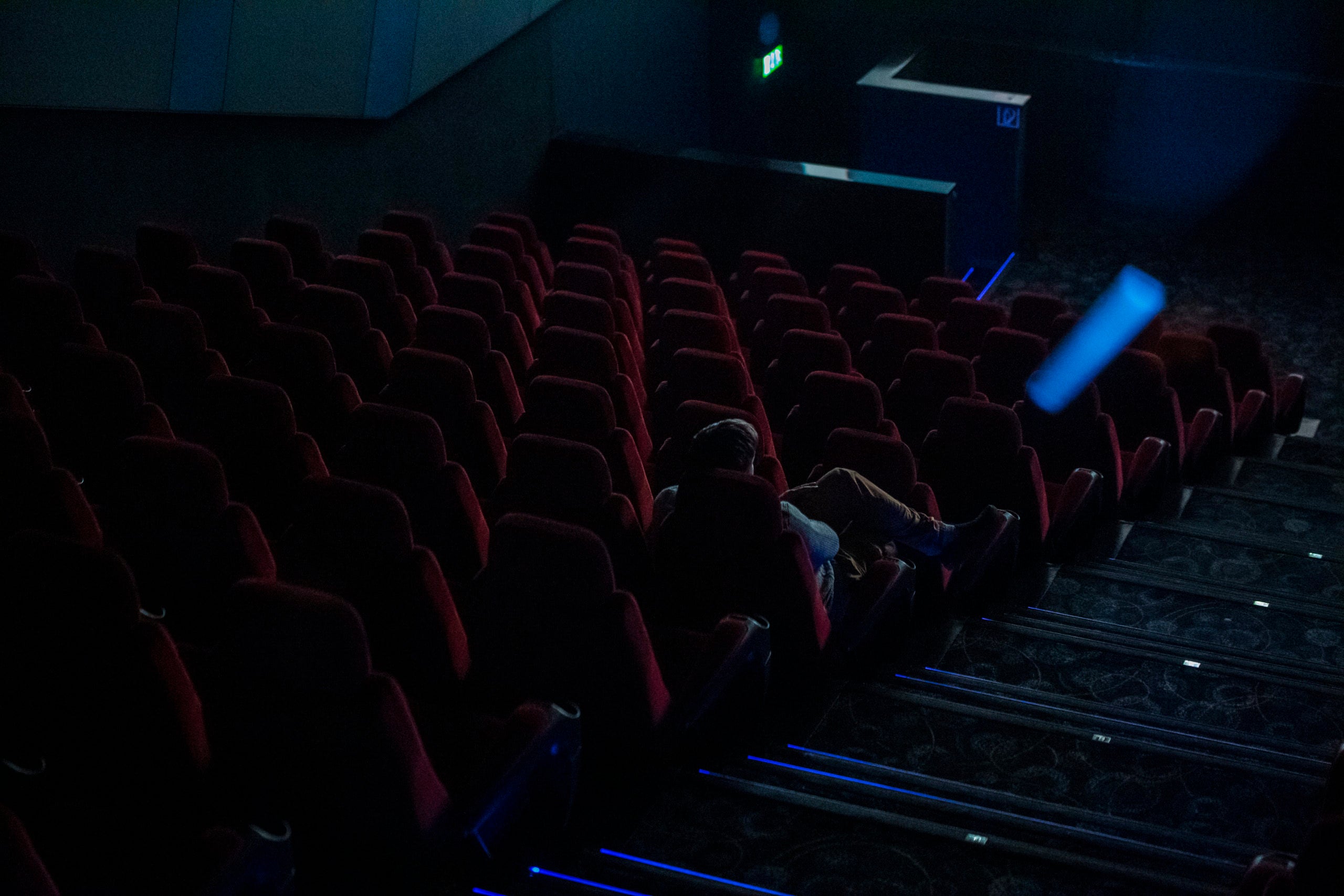 A sole spectator watches a film in a movie theatre in Budapest, Hungary, Thursday, March 12, 2020. Effective from today, cinemas in Hungary are restricted to sell a maximum of 99 tickets for a show as the Hungarian government declared a state of emergency in response to the novel coronavirus, and prohibited all indoor events with more than 100 participants and outdoor events attended by more than 500 participants. (Marton Monus/MTI via AP)
by: JAKE COYLE, AP Film Writer
Posted: Mar 13, 2020 / 04:07 PM EST / Updated: Mar 13, 2020 / 04:43 PM EST

NEW YORK (AP) — Movie theaters have long acted as a refuge in times of war and recession. Their screens have flickered virtually unabated for the last century. But the coronavirus presents a rare case and an acute crisis for a medium already under threat by the advent of streaming services.

With few exceptions, movie theaters across North America are remaining open while Broadway theaters, sports arenas and museums close their doors to help curtail the spread of the coronavirus.

While Hollywood studios have canceled most upcoming films, this weekend is going forward with a slate of new releases and holdovers. The largest chains, AMC, Regal and Cinemark, are all operating, though some theaters are taking extra precautions.

To counter the spread of the coronavirus, the Alamo Drafthouse is instituting “seat separation” policies, along with extra cleaning of theaters in between showing. The theater chain is requesting each group of moviegoers leave empty seats to their sides, a measure also enacted by Northern Ireland’s largest exhibitor, Omniplex. The World Health Organization has suggested maintaining a meter (or about three feet) distance between people.

Theaters are also adjusting to bans on large gatherings, in some cases closing bigger theaters or limiting the number of maximum ticket buyers per screen. AMC, the country’s largest chain, on Friday said it would fill its theaters no more than 50% beginning Saturday and until the end of April to help facilitate social distancing. AMC will no longer sell more than 250 tickets for a showing.

The bans against large crowds vary across the country and are rapidly changing, forcing different strategies for movie theaters in various parts of the country. California’s ban prohibits more than 250 people in a single space. New York’s limits gatherings to 500. Ohio puts its number at 100 people. More states are likely to enact further bans in the near future, as governments work to constrict transmission of the virus.

Just where cinemas fit into the growing retreat isn’t as clear as some other cases. Movie theaters can be IMAX screens that accommodate masses or art-house theaters that aren’t larger than a restaurant. In New York, movie theaters at Lincoln Center, MoMA and Jacob Burns Film Center in Westchester have shuttered. But theaters around even outbreak hotspots like Seattle, Washington, and New Rochelle, New York, have continued to operate, including a Regal theater in New Rochelle.

In many parts of the world, cinemas have already shuttered. China, the world’s second largest movie market, closed its theaters more than a month ago. More recently, Italy, India, Greece, Poland, Lebanon and Kuwait have followed suit. On Friday, Europe extended the cinema shutdown in most theaters in Spain and Germany, as well as those in Denmark and Norway.

In recent days, the major studios have reshuffled the releases of most March and April releases, including “No Time to Die,” “Mulan,” “A Quiet Place Part II” and even some summer releases like the “Fast and Furious” installment “F9.”

But this weekend’s movies were undeterred, including the newly releases “Bloodshot,” the Sony Pictures’ Vin Diesel comic-book adaptation; Lionsgate’s Christian romance “I Still Believe”; and the Blumhouse horror satire “The Hunt.” Marketing budgets often exceed productions expenses for today’s movies. Once a film’s promotion budget is spent, turning back is costly.

“If you’re asking me if I had a crystal ball, is now a good time to release a movie? The answer is no,” said “The Hunt” produced Jason Blum in an interview last week. “But there’s no way to reverse it because you’ve spent the media and you’ve got to go forward.”

And moviegoers are still showing up, albeit in smaller numbers. Last weekend’s domestic box office, while below expectations, was up slightly from the weekend before. This weekend is sure to be a different story, following the widespread closures across public life and the growing understanding of the pandemic’s threat.

Following this weekend, though, theaters — should they remain open — may be starved for films to play. The only wide release still on the schedule in the next several weeks is “Trolls Worldwide Tour” on April 10, Easter weekend. Those moves came along with the halting of most live-action productions and theme parks.

Jeff Bock, senior media analyst for Exhibitor Relations, grants that the large chains have a difficult decision given the varying levels of coronavirus fears across the U.S. But he suspects theaters will close after the weekend.

“It pretty much sends the message: Hollywood is closing down,” said Bock, citing the erased release calendar. “The writing is on the wall. And it couldn’t come at a worse time for the industry. It’s already in a battle for eyeballs with the streaming services. For the foreseeable future, streaming will be king.”

Most chains have sought to assure moviegoers that their theaters, seats and concession areas are being thoroughly and frequently cleaned. Cineplex, Canada’s largest chain, said it was using enhanced cleaning methods. In an earnings report Thursday, Mooky Greidinger, the chief executive of Cineworld, Regal’s corporate owner, said the virus had not affected its business “to a material degree.”

“I am of course conscious of the possibility that events could develop adversely very quickly and change this position in the short term,” said Greidinger, “but I remain confident that the crisis will ultimately pass and that the cinema exhibition industry will continue to play a major role in providing fun, laughter, happiness and joy to millions of dedicated movie fans, just as it has for over a century.”

For most people, the new coronavirus causes only mild or moderate symptoms, such as fever and cough. For some, especially older adults and people with existing health problems, it can cause more severe illness, including pneumonia. The World Health Organization urges people to wash hands frequently and thoroughly, and to maintain social distancing.