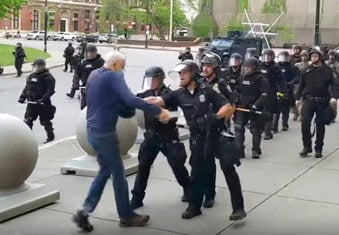 In this image from video provided by WBFO, a Buffalo police officer appears to shove a man who walked up to police Thursday, June 4, 2020, in Buffalo, N.Y. Video from WBFO shows the man appearing to hit his head on the pavement, with blood leaking out as officers walk past to clear Niagara Square. Buffalo police initially said in a statement that a person “was injured when he tripped & fell,” WIVB-TV reported, but Capt. Jeff Rinaldo later told the TV station that an internal affairs investigation was opened. Police Commissioner Byron Lockwood suspended two officers late Thursday, the mayor’s statement said. (Mike Desmond/WBFO via AP)
by: RYAN J. FOLEY, Associated Press
Posted: Jun 9, 2020 / 03:47 PM EST / Updated: Jun 9, 2020 / 03:48 PM EST

(AP) — Minneapolis police initially told the public that George Floyd died after a “medical incident during a police interaction.”

Philadelphia police alleged that a college student who suffered a serious head wound had assaulted an officer.

All three claims were quickly disproved by videos seen widely on the internet and television, fueling mistrust and embarrassing agencies that made misleading or incomplete statements that painted their actions in a far more favorable light.

Defense lawyers say the inaccurate statements are encouraged by a culture of silence in which officers protect misbehaving colleagues, a court system that rarely holds officers accountable and a public that has given police the benefit of the doubt.

Floyd died after a white officer put his knee on his neck, even after Floyd stopped moving. Cellphone video showed him pleading for air as other officers stood by and bystanders urged the police to help him.

The department’s initial news release claimed that Floyd “appeared to be suffering medical distress” after he resisted arrest and was handcuffed. The death set off nationwide protests against police brutality and racial injustice.

Minneapolis police spokesman John Elder said Tuesday that he did not visit the scene of Floyd’s death, which is his normal practice after major incidents. He said he knew the arrest was on body camera video but that he would not be able to review it for several hours. Instead, he released the initial description after being briefed by supervisors, whom he learned later were also not at the scene.

The department realized the statement was inaccurate hours later when the bystander video surfaced, and immediately requested an FBI investigation, he said. By then, the state Bureau of Criminal Apprehension had taken over the investigation of Floyd’s death, and Elder said he was unable to send out a corrected statement.

“I will never lie to cover up the actions of somebody else,” Elder said.

In Buffalo, authorities suspended and charged two officers who were seen last week shoving peace activist Martin Gugino, who fell backward and struck his head on the sidewalk. The charges came only after video captured by a television crew was broadcast. The shove was not mentioned in an initial statement saying that Gugino fell. Police later apologized and said they were “working with incomplete details during what was a very fast-moving and fluid situation.”

On Friday, a prosecutor in Philadelphia charged an officer who was seen on video striking a Temple University student in the head and neck with a metal baton.

The 21-year-old protester needed several staples and stitches to close his wound. He was in custody for almost 40 hours on allegations that he assaulted and injured an officer, according to his attorney. The student was released after prosecutors saw the video and decided to pursue the officer who hit him instead.

Those are only the most recent examples. The same phenomenon has rocked other law enforcement agencies, particularly when minorities have been killed in police interactions that are captured by cellphones, surveillance systems or officers’ cameras.

In Chicago, authorities initially said the 2014 shooting of 17-year-old Laquan McDonald was justified because the teen was approaching officers with a knife. But more than a year later, video was released showing that McDonald was veering away when he was shot by officer Jason Van Dyke, who was later convicted of second-degree murder.

When an officer in suburban Dallas shot 15-year-old Jordan Edwards in 2017, his department said Edwards was in a vehicle with other teenagers that backed up toward police “in an aggressive manner.” The chief later acknowledged that police video showed the vehicle was moving away from, not toward, officers. The officer who fired into the car was later convicted in Edwards’ death.

Civil rights lawyer Michael Avery, who is the board president of the National Police Accountability Project, said false claims by the police had long been known to inner-city communities.

“But what is happening now with video, this is getting out into the larger world, into the media, into white communities, suburban communities, and people outside the affected communities are becoming more aware of what’s going on,” he said. ”It’s a completely different situation.”

When he started practicing law 50 years ago, Avery said, claims of misconduct were hard to prove because it was often one person’s word against “an officer and the officer’s buddies.”

The habit of police giving false testimony is so widely known in New York that it has long been nicknamed “testilying.” Officers are rarely held accountable because they enjoy broad legal protections, and prosecutors almost never charge them with perjury, Avery said.

False public statements made by police departments and their leaders are more of a “political issue” than a legal one, he said.

The availability of video and a fast-moving news cycle accelerated by social media have put extra pressure on police department public information officers.

Having to retract a statement is “very embarrassing to the agency” and causes the community to lose trust, said Leonard Sipes Jr., a retired law enforcement and government spokesman who has written and taught extensively about media relations.

Police representatives should try to watch any video before releasing information to the public and take steps to verify the statements of officers and administrators, he said.

“If they aren’t sure as to what transpired, simply say it’s under investigation and leave it alone,” he said. “It makes no sense to be putting out a story today and two days later having to retract it.”