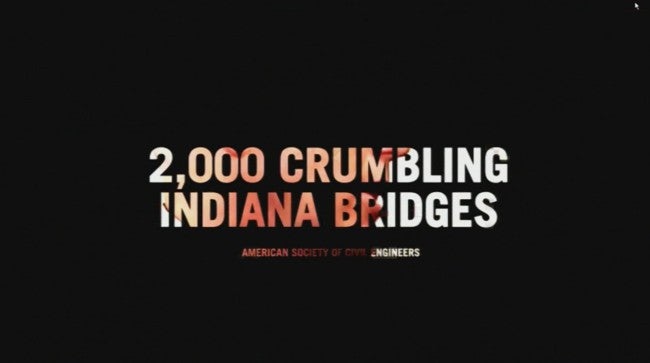 INDIANAPOLIS (WISH) — The 2016 election is more than a year away but one interest group is already targeting Mike Pence with an attack ad.

It’s from the International Association of Operating Engineers, a union that would benefit from more road construction.

It blames the governor for accidents caused by the closure of the I-65 bridge near Lafayette.

“With $2 billion in excess reserves, Governor Pence has no plan to prevent further road disasters,” says the ad. “Tell us Governor Pence: how many lives is your surplus worth?”

“It was brutal in terms of the way it presented the facts in the case,” said John Ketzenberger of the Indiana Fiscal Policy Institute on Indiana Week in Review, “and clearly went after the governor on his record.”

Pence is vulnerable. His approval rating dropped 20 points following the RFRA crisis and the ad is an attempt to kick him when he’s down.

“This is the start of the campaign and the message received here, I hope, is that they’re going to see more and more of this kind of attack stuff from everybody,” said Republican Mike McDaniel referencing the governor’s campaign, “and they better be ready to answer it because last time they weren’t willing.”

A spokesman for the governor’s campaign suggested that the ad is off-base because the I-65 bridge was shut down due new construction and not because of structural problems.