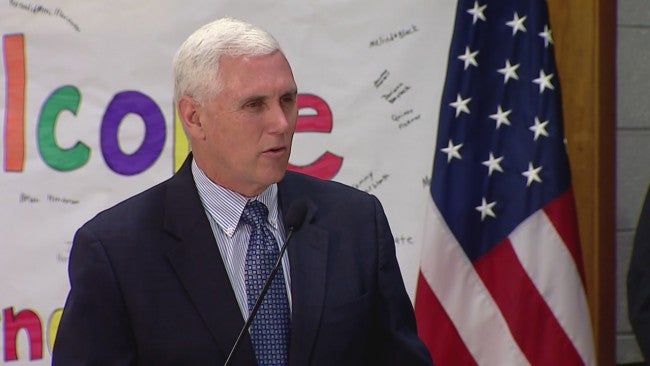 INDIANAPOLIS (AP) – Gov. Mike Pence, who often identifies himself as a Christian and man of faith, finds himself in a delicate spot as he navigates the issue of sheltering Syrian refugee families in Indiana.

The Republican’s objections to welcoming the refugees has put him at odds with the Roman Catholic Archdiocese of Indianapolis, which went ahead last week with plans to place a family of four from the war-torn country in the city, saying the reception was “an essential part of our identity as Catholic Christians.”

Critics say Pence’s stance, based on concerns about security threats, risks making Indiana seem less than hospitable, especially after last spring’s controversy over a religious objections law that provoked national backlash amid worries that it would sanction discrimination against gay people on religious grounds. Some critics even suggest the tough refugee stance runs counter to Christian teaching.

But the governor rejects the criticism, saying he believes his job is striking a balance between compassion and charity on the one hand, and keeping people safe on the other.

“My faith informs me to keep my oath (of office),” Pence said after the archdiocese’s announcement. That, he said, means a “responsibility to do everything in my power to see to the safety and security of the people of this state.”

Last month Pence joined 30 other governors, all but one a Republican, who sought to block the resettlement of Syrian refugees in the wake of the deadly attacks in Paris. They noted that a Syrian passport was found near one of the attacker’s bodies.

Advocates of accepting the refugees, including Obama administration officials, argue that potential terrorists face extremely long odds of successfully infiltrating the U.S. through the refugee program. They point to the detailed security checks involved, some of which can involve a years-long wait.

Pence initially directed all state agencies to “suspend” the resettlement program, even as opponents challenged his legal authority to do so. After the church’s move, he said state officials were instructed to block only the state’s small share of refugee services, while allowing federally funded services to proceed.

The governor, who was born into a Catholic family but became an Evangelical Christian as a young man, has expressed sympathy for the refugees’ plight, and rejected GOP presidential candidate Donald Trump’s call to bar the entry of Muslims into the U.S. In trying to block the refugees, he and other governors said they were trying to force the Obama administration to offer more assurances of security.

“I don’t think we have to choose between security and compassion,” he said.

Experts in politics and faith say there long have been tensions between religious conviction and the need to effectively govern, which is now Pence’s challenge. His political base is composed of religious conservatives, and in Congress, before he became governor, he liked to identify himself as “Christian, conservative and Republican, in that order.”

“Governor Pence cannot only be a Christian. He is the governor of Indiana,” said Arthur Farnsley, a professor of religious studies at Indiana University-Purdue University Indianapolis. “Our (founding) principles – helping people in need – always have to be balanced against the need for safety and security.”

Added Steven Bucci, a foreign policy expert at the conservative Heritage Foundation: “Christian principles in the Bible are directed at individuals – not at governments.”

But Notre Dame theology professor and migration expert Rev. Daniel Groody said not welcoming the refugees was “certainly not Christian.” He accused the governors of “using this stuff for political gain” by exploiting voters’ fears, and, and he alluded to Jesus’ birth in a manger after Mary and Joseph fled persecution.

“The Christian faith would argue that God himself came to our world as a migrant,” Groody said. Opposing the refugees “makes it look like (the governors) are trying to protect us for the common good. But these (refugees) are not the people we need to be afraid of.”

Recent polls show that a majority of Republicans see a high risk that refugees from Syria will commit acts of religious and political violence in the U.S. Pence is expected to face a tough re-election challenge next year against Democrat John Gregg, but he has no GOP primary challenger.

Pence, at an airport news conference, dismissed as “ridiculous” the suggestion that his refugee posture made Indiana seem unwelcoming.

“The fact that Indiana, along with 30 other states, has expressed concerns about the security associated with the Syrian refugee program is a reflection of common sense,” he said.