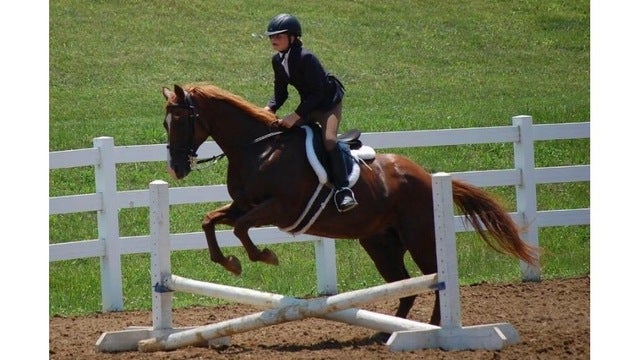 BAINBRIDGE, Ind. (WTWO) –  Law enforcement is looking for the suspects who killed two registered quarter horses on a farm in Putnam County.

It was something a family living in the small town never thought would happen let alone, happen in their own back yard.

They aren’t sure how or why it happened, but two children and their parents are looking for answers as to why their competition horses were targeted.

Phillips owns and boards horses on her Putnam County property. She said she knew something terrible had happened when she walked out of her home to greet the animals and found two of them laying dead.

The two horses, Kat and Mama, belonged to Ryan Phillips and Jenna Vanransselear.

“I have heard it, but I never thought that would happen here,” Ryan Phillips said.

Ryan Phillips and Vanransselear had been training the horses to compete in various shows throughout the year.

Evidence shows the deaths were no accident. The families don’t know why someone would target their horses.

“That for me is what bothers me the most is what they took from him was his last three years of blood and sweat,” Karen Phillips said.

For the kids, they did not just lose livestock, Ryan Phillips said. “That is what we said about me and my horse, that we fought like brother and sister. It just really, that is exactly how it was.”

“But I don’t think we will ever find anybody that was quite as good as Mama,” Vanransselear said.

For Ryan and Jenna’s parents, they also lost a sense of security.

Of course, Phillips said she want the perpetrators caught but she also wants her questions answered. “Yeah, I want to see you in jail. I think they are dangerous people, I think they are sick-minded. I don’t know what their next thrill could be. But yeah, just why? Why these horses? Why here? Why would you do that?”

The horses were sent to Purdue University for necropsies. Preliminary results showed extensive internal damage, something law enforcement told the family the horses did not do on their own.

Any information should be reported to the Putnam County Sheriff’s Department. There is a $5,000 reward for information leading to an arrest. Also, there is a GoFundMe account to help pay for the necropsy testing and the reward.