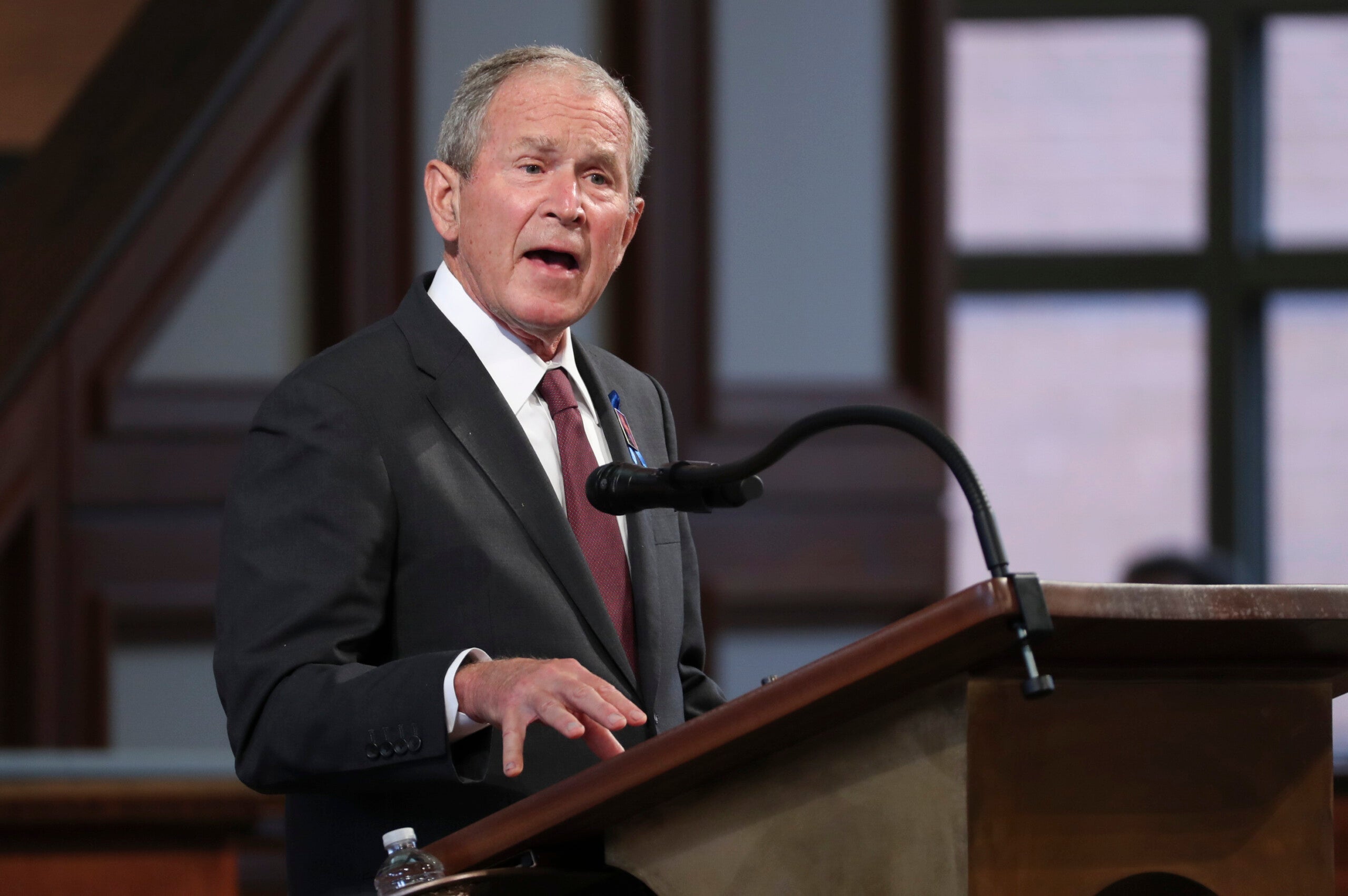 ATLANTA (AP) — Hailed as a “founding father” of a fairer, better United States, John Lewis was eulogized Thursday by three former presidents and others who urged Americans to continue the work of the civil rights icon in fighting injustice during a moment of racial reckoning.

The longtime member of Congress even issued his own call to action — in an essay written in his final days that he asked be published in The New York Times on the day of his funeral. In it, he challenged the next generation to lay “down the heavy burdens of hate at last.”

After nearly a week of observances that took Lewis’ body from his birthplace in Alabama to the nation’s capital to his final resting place in Atlanta, mourners in face masks to guard against the coronavirus spread out across pews Thursday at the city’s landmark Ebenezer Baptist Church, once pastored by the Rev. Martin Luther King Jr.

Former President Barack Obama called Lewis “a man of pure joy and unbreakable perseverance” during a fiery eulogy that was both deeply personal and political. The nation’s first Black president connected Lewis’ legacy to the ongoing fight against those who are “doing their darnedest to discourage people from voting.” His words came as the country has been roiled by weeks of protests demanding a reckoning with institutionalized racism — and hours after President Donald Trump suggested delaying the November election, something he doesn’t have the authority to do.

“He as much as anyone in our history brought this country a little bit closer to our highest ideals,” Obama said. “And some day when we do finish that long journey towards freedom, when we do form a more perfect union, whether it’s years from now or decades or even if it takes another two centuries, John Lewis will be a founding father of that fuller, fairer, better America.”

Former President George W. Bush said Lewis, who died July 17 at the age of 80, preached the Gospel and lived its ideals, “insisting that hate and fear had to be answered with love and hope.”

Former President Jimmy Carter sent written condolences, and House Speaker Nancy Pelosi recalled how the sky was filled with ribbons of color in Washington earlier this week while Lewis’ body was lying in state at the U.S. Capitol.

“There was this double rainbow over the casket,” she said. “He was telling us, ‘I’m home in heaven, I’m home in heaven.’ We always knew he worked on the side of angels, and now he is with them.”

Lewis was the youngest and last survivor of the Big Six civil rights activists, led by King. He was best known for leading protesters in the “Bloody Sunday” march across the Edmund Pettus Bridge in Selma, where he was beaten by Alabama state troopers.

During the service, the arc of Lewis’ activism was once again tied to King, whose sermons Lewis discovered while scanning the radio dial as a 15-year-old boy growing up in then-segregated Alabama.

King continued to inspire Lewis’ civil rights work for the next 65 years as he fought segregation during marches, “Freedom Rides” across the South, and later during his long tenure in the U.S. Congress.

“Get in good trouble, necessary trouble, and help redeem the soul of America,” Lewis said of his run-ins with the law. The phrase was repeated several times during the funeral.

“We will continue to get into good trouble as long as you grant us the breath to do so,” one of King’s daughters, the Rev. Bernice King, said as she led the congregation in prayer. She later paused and laid her hand atop Lewis’ flag-draped casket at the front of the church.

Ebenezer’s senior pastor, the Rev. Raphael Warnock, called Lewis “a true American patriot who risked his life for the hope and promise of democracy.”

Outside the church, with temperatures in the upper 80s, hundreds gathered to watch the service on a large screen; some sang the civil rights anthem “We Shall Overcome.” Pharrell Williams’ joyous tune “Happy” played as a closing song while a military honor guard loaded Lewis’ flag-draped coffin into a hearse; many congregation members clapped along.

The service ended days of remembrance for Lewis, who spent more than three decades in Congress representing most of his adopted home of Atlanta. In addition to the U.S. Capitol, his body lay in the Georgia and Alabama Capitol buildings, and events also were held in the Alabama cities of Troy, Lewis’ hometown, and Selma.

To the many tributes Thursday, Lewis managed to add his own words. His essay in The New York Times recalled the teachings of King:

“He said we are all complicit when we tolerate injustice,” Lewis wrote. “He said it is not enough to say it will get better by and by. He said each of us has a moral obligation to stand up, speak up and speak out.”

“In my life I have done all I can to demonstrate that the way of peace, the way of love and nonviolence is the more excellent way,” he wrote. “Now it is your turn to let freedom ring.”

Former President Bill Clinton referenced the essay during his remarks: “It is so fitting on the day of his service, he leaves us his marching orders: Keep moving.”