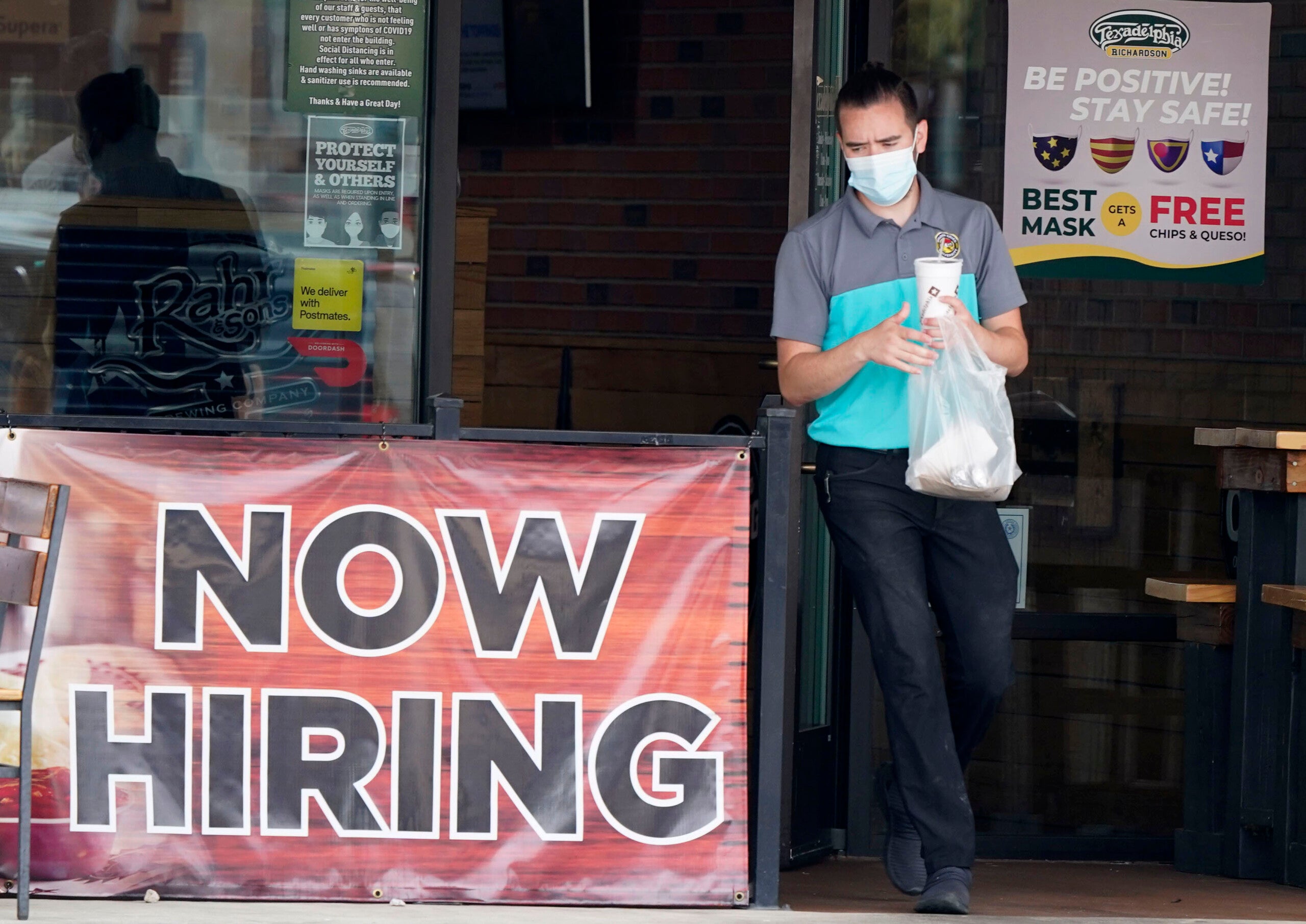 FILE - In this Sept. 2, 2020 file photo, a customer wears a face mask as they carry their order past a now hiring sign at an eatery in Richardson, Texas. On Thursday, Nov. 5, the number of Americans seeking unemployment benefits fell slightly last week to 751,000, a still-historically high level that shows that many employers keep cutting jobs in the face of the accelerating pandemic. (AP Photo/LM Otero, File)
by: CHRISTOPHER RUGABER, AP Economics Writer
Posted: Nov 6, 2020 / 08:51 AM EST / Updated: Nov 6, 2020 / 03:40 PM EST

WASHINGTON (AP) — Defying fears of another slowdown, U.S. businesses kept hiring at a solid pace in October yet there are signs they remain cautious about the economy’s future as the pandemic worsens.

The Labor Department said Friday that employers added 638,000 jobs and the unemployment rate tumbled a full percentage point to 6.9%, extending what has been a faster recovery than many economists expected in the spring.

But the pace of hiring isn’t robust enough to rapidly soak up the millions of Americans who were thrown out of work by the pandemic recession.

The job gains were little changed from September’s 672,000 and less than half August’s 1.5 million. But the increase was stronger than it appears: It was held down by the loss of about 150,000 temporary Census jobs. Excluding governments at all levels, private businesses added a healthy 906,000 jobs. That figure has held steady for three months.

Overall, the latest jobs report suggests the tentative recovery remains intact, for now, and that the economy is continuing to adapt to the pandemic.

“It was a pleasant surprise to see that the pace of the recovery hasn’t slowed down,” said Nick Bunker, an economist at Indeed, the job search website. “But we all need to keep in mind the huge hole that we’re in, in terms of jobs and unemployment.”

Hiring rose in retail, including in online retail, where many Americans have turned during the viral outbreak. Warehousing and courier services have both added jobs in every month since the pandemic, including last month.

In a sign of the uncertainty clouding the economy as the virus surges, companies also added more than 100,000 temporary workers. That suggests they are seeing more demand from customers but aren’t sure how long it will last and are reluctant to make permanent job offers. The length of the average work week also rose, evidence that employers pushed their current staff to work more rather than take on new workers.

Federal Reserve Chair Jerome Powell and many Wall Street economists have urged Congress to approve more government aid to support families and businesses, particularly as the pandemic rages and colder weather threatens recent hiring gains among restaurants and bars, which had been able to serve more customers outdoors.

But the prospects for more stimulus have been scrambled by the election, which appears likely to result in a victory for Democratic candidate Joe Biden, while possibly preserving a Republican majority in the Senate. That could mean any additional aid will be postponed until at least next year.

The job market and the overall economy remain under intensified pressure from the accelerating pandemic. On Thursday, the nation broke another record in the seven-day rolling average for new cases, hitting nearly 90,000. Daily new cases were also on track for another day above 100,000, with surging numbers reported all around the country, including a combined nearly 25,000 in Texas, Illinois and Florida.

The nation still has 10.1 million fewer jobs than it did before the viral outbreak intensified in March. At the current pace of hiring, it would take until February 2022 to regain all those jobs. Still, that would be faster than the 2008-2009 Great Recession, when it took more than five years to recover the jobs lost.

The gradual recovery of the job market has affected Americans in uneven ways and widened inequalities. Lower-paid workers in industries like restaurants, hotels, and health care have seen their jobs and incomes recover much more slowly than white-collar workers who have largely worked from home. Many of them have also benefited from a surge in home equity and from the Federal Reserve’s ultra-low-rate policies, which have fueled gains in the stock market.

Women have been more likely to leave the workforce than men since the pandemic began, particularly since school started, with many schools operating only online. That has forced many working mothers to quit jobs.

And the unemployment rate for Black workers, at 10.8%, fell sharply in October but remained much higher than for whites, which dropped to 6%. Hispanic unemployment fell to 8.8% from 10.3%.

Some companies have benefited from the ways the pandemic is reshaping the way Americans work and live. With one-fifth of the employed working from home, the government’s report showed, spending on services such as cleaning, painting and remodeling has jumped.

“As far as hiring goes, we’re in full swing,” said Paul Flick, founder and CEO. “People are investing more money in the place they’re spending their time in.”

Flick said his company’s franchises have increased hiring roughly 25% since the pandemic struck. Many of their new hires used to be cleaners at hotels or lost jobs in other service businesses.

Yet many other firms are still struggling. JMBrennan Inc., a third-generation mechanical engineering firm in Milwaukee, has had to lay off some employees because of the pandemic and the uncertainty it has created. The company installs and fixes plumbing, heating and air conditioning systems, but demand has fallen as office buildings and schools remain empty.

And with the pandemic worsening, few businesses are thinking of expanding.

“Does anybody need a brand new office tower?” Brennan asked. “Does anyone need a new hospital?” His firm finished work in June on the new 25-story BMO Bank Tower in downtown Milwaukee that he estimates has maybe 35 people in it. Workers are unlikely to return if the pandemic continues, he said.

“We’re not shutting down the economy, but the fact that Covid is still there leaves a lot of uncertainty,” he said. “You don’t need to expand if no one is in your building.”

The economy, which had rebounded sharply in the July-September quarter as businesses reopened from virus-related shutdowns, is now expanding more slowly. Many businesses may struggle as the weather turns colder. Consumers could also pull back again on shopping, traveling and other activities to avoid contracting the virus.

Still, some parts of the economy are recovering steadily. Manufacturing output is still rebounding, with Americans stepping up their purchases of cars, homes and housing-related goods like appliances and furniture. Home sales have also risen as the Fed has pushed mortgage rates to nearly record lows.