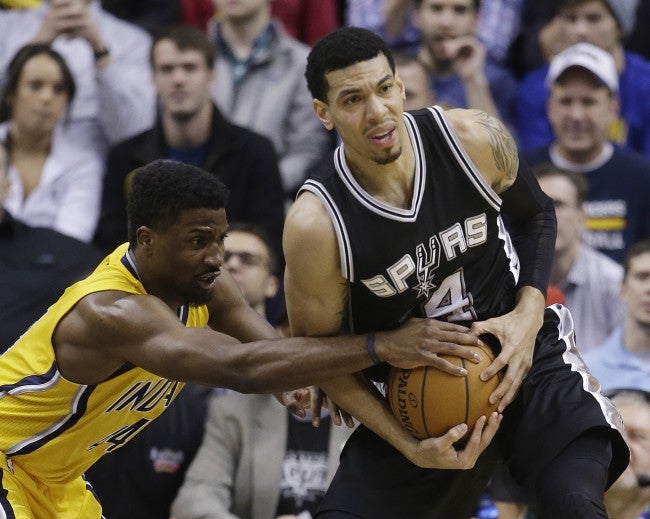 Popovich became the ninth coach with 1,000th regular-season wins and became the third-fastest to achieve the feat. He also joined former Utah coach Jerry Sloan as the only coaches in league history to win 1,000 games with one team.

Tony Parker led the Spurs with 19 points. Tim Duncan had 15.

Rodney Stuckey scored 18 for Indiana, which had its season-best winning streak end at three.

The Pacers appeared to take control by building a 79-65 lead after three quarters.

But the Spurs scored nine straight to tie the score at 91, tied it again at 93, took the lead on Belinelli’s shot and held on when George Hill’s 3-pointer bounced off the rim.

San Antonio failed to give Popovich his grand party Sunday night when it lost at Toronto.

The defending NBA champs weren’t about to let that happen again, even when they were down 91-82 with 5:36 to go.

And, of course, the Spurs rallied by using Popovich’s plan of getting everyone involved.

Danny Green started the rally with a layup. Kawhi Leonard completed a 3-point play. Duncan scored on another layup and when Parker knocked down two free throws with 3:18 left, the score was suddenly tied at 91.

Indiana answered with a 20-footer from Stuckey to retake the lead, but Aron Baynes tied it again with a tip-in with 56.7 seconds left to set up the final sequence – Belinelli’s shot just before the shot clock expired and Hill’s miss from the top of the key.

Spurs: San Antonio has dominated this lopsided series, winning 14 of the past 15. But this year’s season sweep came with a strange twist: The Spurs won each game with a different coach. Assistant coach Ettore Messina stepped in for Popovich and led the Spurs to a 106-100 win Nov. 26.

Pacers: How tough have things been this season for Indiana? The Pacers haven’t won four straight in 11 months. And San Antonio has won six straight on the Pacers’ home court. Indiana’s last home win against Popovich came in April 2007.