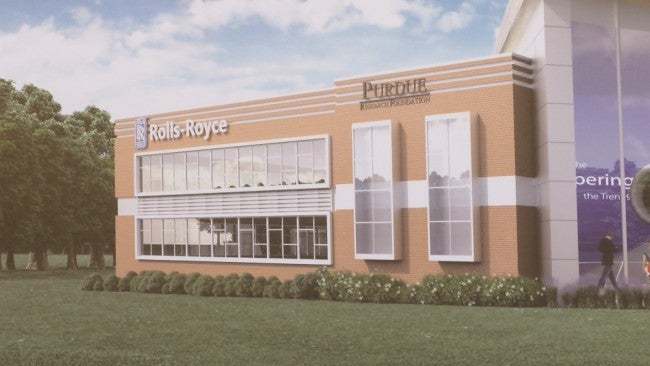 WEST LAFAYETTE, Ind. (WLFI) – Purdue University and Rolls-Royce have announced they’re “taking off” on a new partnership, which includes the construction of a new 40,000-square-foot facility in the Purdue Research Park Aerospace District.

The facility will house a research and development group for Rolls Royce jet engine components, and will be the first business in the Purdue Aerospace District.

But university and city officials said the partnership will do much more than help the company develop its product.

“Everybody knows what the double ‘R’ looks like, and it’s really going to be welcoming and sort of a key to what goes on here in our community,” said West Lafayette Mayor John Dennis.

Rolls-Royce, along with Purdue University, have announced plans to partner on a new research and development group. It’s a key that Purdue Polytechnic Institute Dean Gary Bertoline said could be opening a lot of doors for the university.

“That will be an immediate attraction,” said Bertoline. “To know that a company of that distinction is here on campus collaborating with our faculty and students.”

The Purdue Research Foundation plans to construct the facility in the new aerospace district to house a research and development group for the company.

Rolls-Royce liaison Dennis Warner said students will use the facility to test fuel and oil pumps, as well as fuel metering systems. He said the experience could pay off for student researchers.

“They can be learning about our product,” said Warner. “They can be helping with the testing, and eventually they can be great candidates for hires.”

Eventually, Purdue hopes to bring in other aerospace and aviation development companies into the new facility.

Mayor Dennis said the partnership with Rolls-Royce is just the beginning for area development.

“The success story is continuing. And this is just another example of how ready we are, and how this isn’t just an accident, and how ready we are for jobs in this community and for sound investment,” said Dennis.

There is not an estimated cost for the project just yet, but the facility will be constructed in the Purdue Research Park Aerospace District.

However, it must first be approved by the Purdue Board of Trustees.