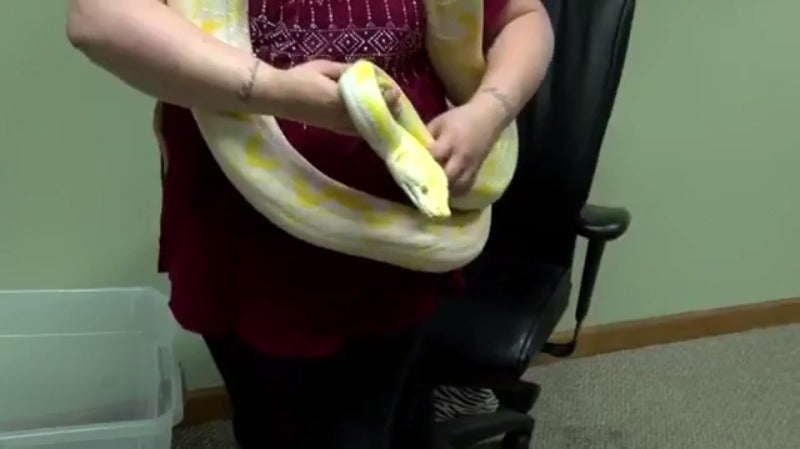 “I call her Big Bertha, but she doesn’t really have a name,” said Brawn. “We’ve had hundreds of different species. But they’re my favorite.”

Brawn was also a friend to 36-year-old Laura Hurst, who was found dead Wednesday with a reticulated python wrapped around her neck in a “reptile home” in Oxford. The Benton County coroner on Friday determined Hurst’s cause of death to be strangulation by a snake.

According to Brawn, Hurst positively impacted everyone she encountered.

“She was very passionate about snakes and was very big in the reptile community,” Brawn said.

Brawn said Hurst would do anything to help others.

“She saved one of our ball pythons; I think it was about three-and-a-half years ago,” Brawn said.

She said she was hurt to hear of Hurst’s death and said it’s uncommon for snakes to strangle someone to death.

“It’s almost never,” said Brawn. “Never. I mean we’ve got wild reticulated pythons, but it’s illegal to own them and it’s illegal to import and export them. So what’s in the United States was bred here and domesticated.”

Reticulated pythons can grow up to 17 feet long and weigh up to 100 pounds,according to Brawn, who says taking care of that kind of snake alone isn’t ideal.

“Usually when you’re dealing with larger snakes like that, you want to have another person there helping you,” said Brawn. “You don’t want to do it alone.”

Snake handler Zachary Compton has handled snakes for 14 years. He said snakes carry their own personalities.

“Read their behavior,” said Compton. “We’ve had plenty in here over 6 feet long, and they wouldn’t even think about biting a person. So it really just depends on the snakes.”

Compton said if a reticulated python has an aggressive personality, it can be dangerous.

“They are reall,y really curious and ones that get as big as they do, if you’re not prepared for it, personally, then you could have problems,” said Compton.

This website provides safety tips for those looking to handle any size snake or species.