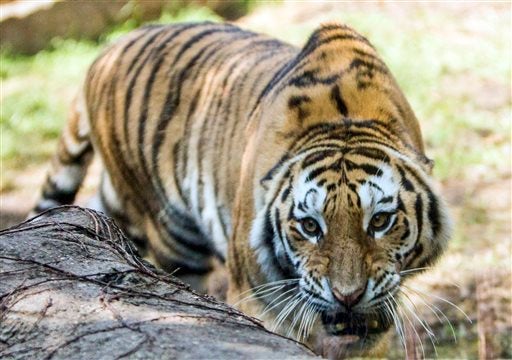 SOUTH BEND, Ind. (AP) – Four young Amur tigers have joined the Potawatomi Zoo in South Bend, less than a year after the zoo had to euthanize its two older tigers.

The rambunctious tigers are sisters and were born two years ago in Columbus, Ohio, Potawatomi Zoo curator Josh Sisk said. Amur tigers are considered endangered by the International Union for Conservation of Nature, with fewer than 500 remaining in the wild.

Sisk said the zoo didn’t know “we’d be getting so many, or such young tigers.”

“We thought we might get one or two new tigers,” Sisk told the South Bend Tribune.

Sisk said the new tigers – named Morgana, Taj, Ursula and Glinda – likely won’t stay together once they turn four years old, and would go to other zoos for breeding. He said the four tigers will be important in keeping the species’ genetic pool diverse once they reach breeding age.

The South Bend zoo might get a male tiger so it can have its own breeding program, he said.

Sisk said the four tigers are a “unique opportunity,” and a big transition from the two geriatric tigers – Ivory and Flash – that zoo staff had to euthanize last year. The four sisters have access to both exhibits that previously housed Flash and Ivory.

The tigers, who each eat about eight pounds of meat per day, have kept zoo staff on their toes in the two weeks since they arrived.

The exhibit is now open to the public, but bamboo fencing has been erected to keep zoo visitors back from the windows. The barrier helps acclimate the tigers to the presence of humans, without exposing them to visitors who might tap their fingers or slap their palms on the glass, possibly agitating the tigers, Zoo executive director Marcy Dean said.