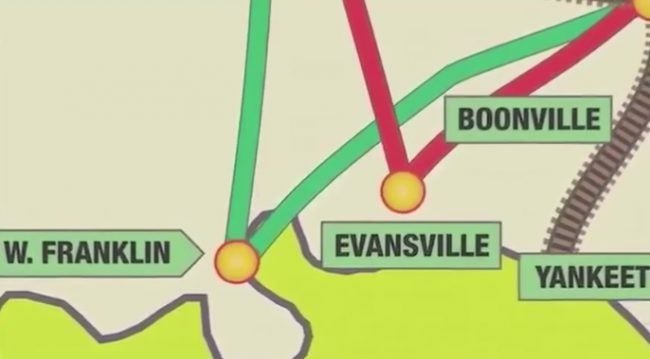 (WEHT) — Most of us have heard of the Underground Railroad, the organized, highly secretive network that worked to bring slaves out of the south to freedom in Canada.

What you may not know is that southwestern Indiana was deeply rooted in that effort. Thousands of former slaves made their way through this area to escape bondage – thanks to the bravery and sacrifice of strangers from Warrick and Gibson Counties.

Phyllis Jamison had an ancestor who worked with the Underground Railroad.

She remembers the day she learned about the Underground Railroad at school.

“My mother asked me what I learned in school today and I said, ‘the Underground Railroad,'” Jamison said.

That was the first time Phyllis Jamison ever heard about it, but what was to come changed her outlook on history and her family.

“She gave me this book and my grandfather was in it,” Jamison said.

Her great, great grandfather is Ira Caswell, a reported founder of the Anti-Slavery League in Southern Indiana. According to the book, Caswell smuggled runaway slaves onto his farm just up the road from Jamison’s home near Boonville, Indiana.

“They would come from the river, through the thickets – people looking for them,” Jamison said.

Runaway slaves would cross the Ohio River near Yankeetown – west of Evansville – or in Owensboro.

The first stop on the journey north would often be Caswell’s home.

The Caswell Farm is long gone. The land is now owned by a coal company. Mrs. Jamison says the only marker left is an old pear tree.

About two miles from Jamison’s home along Dickeyville Road, we found it. The old pear tree is where the house stood. Barns and buildings used to be all around it. And in the back, you can still see the woods where the runaway slaves were kept out of sight.

Though it’s seen as heroic now, helping runaway slaves in the 1850’s was illegal and extremely dangerous. The Fugitive Slave Law punished anyone aiding an escaped slave with a $1,000 fine – a fortune at that time – and time in prison.

The runaways had to keep moving. Caswell would hide them in a wagon full of pumpkins or fishing gear and take them overnight to the next stop on the Underground Railroad in Gibson County.

Where Oakland City University now stands was previously the property of James Cockrum.

A barn used to be on the property and it hid the runaways safe from bounty hunters.

Dr. Randy Mills says there was a secret lower area where the slaves stayed.

James Cockrum’s son, William, wrote about his father’s work in a book called “The History of the Underground Railroad.” Some scholars question the accuracy of the book, and Dr. Mills admits there may be some exaggeration. But most of it, he believes, is true.