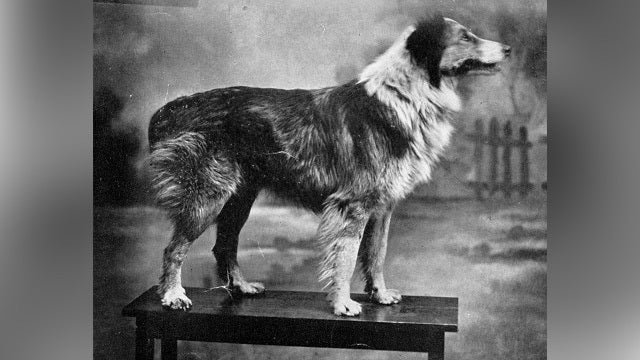 SILVERTON, Ore. (KOIN) — Pets can be incredible companions. They make us laugh, help us feel less alone and their unconditional love wins them special sway over our hearts.

And sometimes, our pets do incredible things that defy all odds.

In August 1923, the Brazier family left their home in Silverton, Oregon and took a road trip east to visit relatives in Indiana.

They took their Scotch collie-English shepherd mix dog named Bobbie with them.

But while stopped at a gas station in Wolcott, Indiana, Bobbie was chased off by a group of local dogs.

The family searched for Bobbie for days; even going so far as to put up posters around town and notices in the newspaper but they never found him. Heartbroken, they returned back home to Oregon.

But they hadn’t seen the last of Bobbie.

On a February day in 1924, one of the Brazier daughters stepped out of the cafe her family owned — the Reo Lunch Restaurant — and saw something miraculous.

Bobbie was walking down Main Street.

Gus Frederick, the vice president of the Silverton Country Historical Society, said the dog was wagging its matted tail as it approached the familiar face.

He was mangy, dirty and underweight. His toenails had been worn down to almost nothing and he showed all signs of having walked the entire way home.

Against all odds, Bobbie survived. And he was home.

Eyewitness accounts stored at the Oregon Historical Society documented the emotional reunion between dog and humans as Bobbie was taken upstairs where Mr. Brazier was taking a nap.

“He jumped on the bed and woke him up, he thought he was dreaming,” Oregon Historical Society executive director Kerry Tymchuk read from the historical account. “And Bobbie was so tired and exhausted, of course, and worn down — they fed him a sirloin, a big bowl of cream, and he didn’t move for 3 days.”

Bobbie had somehow managed to traverse at least 2,551 miles of plains, deserts and mountains. He would have had to swim rivers and cross the Continental Divide, all during the dead of winter.

Bobbie, it seemed, was a true wonder.

In fact, his journey home earned him the name “Bobbie the Wonder Dog” and his incredible story quickly spread across the country thanks to radio broadcasts and newspaper articles.

Tymchuk showed KOIN 6 News letters and telegrams from fans as far away as Australia.

Within 3 months of returning home, Bobbie starred in a silent film about his journey called “The Call of the West” in which he reenacts the possible adventures he had along the way.

The movie was, of course, based on a true story but only Bobbie himself ever knew the details.

His journey was actually confirmed, Frederick said, by various witnesses who reported seeing Bobbie at campsites between Indiana and Oregon during the months that he was missing. Some people said they would give Bobbie some food and he would be on his way.

The collie mix took his stardom in stride, making appearances at various locations, including the Portland Home Show where 40,000 people came to see him and he was presented with a fancy doghouse called “Bobbie’s Castle.”

Bobbie even went on to sire a litter of 15 puppies — all of which were males — before his death in 1927.

Newspapers around the world noted the passing of Bobbie the Wonder Dog.

“Something marvelous roused in Bobbie’s brain and roused his need and guided him on the long trail as surely as Polaris guides the Mariner,” Tymchuk read from accounts.

He was buried with honors at the Oregon Humane Society’s Animal Cemetery and a famous movie star dog named Rin Tin Tin traveled to Oregon to lay a wreath at his grave. The doghouse Bobbie was given the year before still sits on top of his grave, surrounded by a white picket fence and trees.

Today, it’s impossible to know just how many people have been touched by Bobbie’s incredible journey.  In Silverton, a giant mural next to the original Reo cafe depicting the Wonder Dog’s story continues to pass the tale on to visitors who have never heard it before.

A statue of Bobbie and a replica of his special doghouse also sit loyally in Silverton. And every year, the residents of the town pay tribute to their local legend with an annual pet parade.

Bobbie’s son Pal was the first grand marshall of the first pet parade in 1932.

Bobbie reminds us to never underestimate our animal companions or take for granted the lessons they teach us.

Because sometimes, they show us the true meaning of courage, family and finding the way back home, no matter what stands in the way.