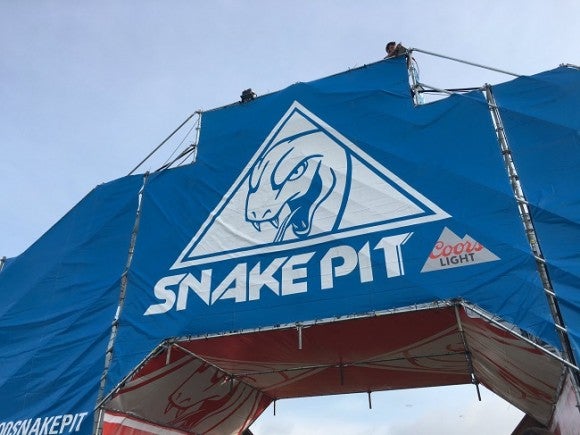 SPEEDWAY, Ind. (WISH) — Fun. Party. America. Those are the three words you hear once you’re deep in the mix of the pit.

That pit of course, is the Indy 500’s Snake Pit. A raucous, boisterous, all out affair held hours before 33 drivers fight for the Borg-Warner Trophy.

“The Snake Pit is something everybody should come to no matter where you’re from,” said Jordan Burrows. “Indiana represents.”

The Snake Pit kicked off at 7 a.m. and featured performances from acts such as Zedd, Action Bronson and Marshmello.

“I really want to see Zedd, but it’s right in the middle of the race,” said one attendee while music from The Trap House played in the background. “I’ll have to figure something out.”

It was hard to not get caught up in the vibrations of music bellowing from the stage toward the front of the venue, but priorities varied when it came to why attendees came out to the event.

“I’m a people watcher for sure,” said a woman who only wanted to be identified as Libby. “We saw a guy stumbling from shots and it’s like eight in the morning.”

The party didn’t go on without a few lighthearted jabs at the fun.

“I don’t know if a lot of fathers would be proud with some of these outfits out here,” said Zach Simmons. “Don’t think they’d be proud at all.”

While the party kicked off at 7 a.m., that didn’t stop some from getting all out loose.

“I saw one woman who fell over dancing. She was pretty hype.”

Whether you’re in the mood for dancing, drinks, or just partying with friends, the Snake Pit looks to remain a staple on race day for everyone to enjoy.