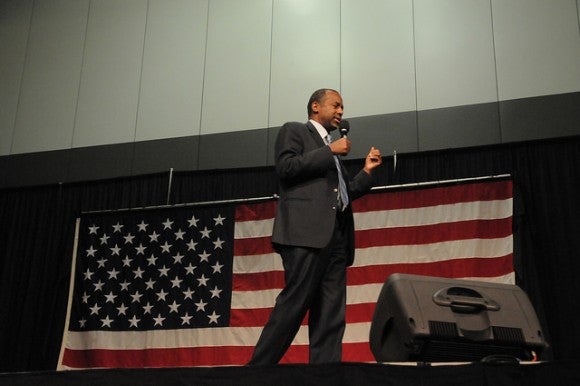 FORT WAYNE, Ind. (WISH) – Indiana voters got a chance to hear firsthand how one presidential candidate plans put the nation on the right path.

Republican Ben Carson held a rally in Fort Wayne as he continued his Midwest campaign tour.

Thousands of them packed the Allen County War Memorial Coliseum, seizing the opportunity to hear his stance on pressing issues while also letting him know he’s already got their vote.

If there was ever a line to help warm up a crowd of Hoosiers, Carson found it.

“You know I love coming to Indiana, a lot of people here with common sense and you don’t find that every place,” he said to a round of applause. That place today was Fort Wayne, where he held a rally estimated around 4,000 people strong.

“Even though we’re the second largest in Indiana it’s nice to know that he wants to come to the small cities,” said Beth Maish of Goshen.

One of the first issues Carson tackled was one he’s been scrutinized for, national security.

He outlined ideas for stopping ISIS on the home front and overseas, using the internet as a way to combat terrorism.

Carson went on to say that the real answer to protecting the American people is to take the war to the instigators overseas. He said the nation needs to be willing to do what’s necessary to stop terrorism, even fighting dirty since that’s how the terrorists fight.

Carson took two questions from the crowd, one on gun control. He said rather than regulate what types of weapons are sold, the focus should be on making sure owners are in good mental health.

“We need to make sure that we understand that guns don’t kill people, people kill people,” he said to a round of applause.

But the loudest and most emphatic response came when Carson told the conservative crowd that progressives shouldn’t be trying to remove God from society.

The support around the room was undeniable, just like Carson’s recent dip in the polls. Several reports had him in recent weeks had him anywhere from second place to fourth with Donald Trump leading the way.

But many people at the really were confident the retired neurosurgeon could revive his campaign.

“I think he is one of the top ones and I think he will come out ahead in the end,” said Joan Gebert of Fort Wayne.