Training wheels are coming off for Colts QB Andrew Luck 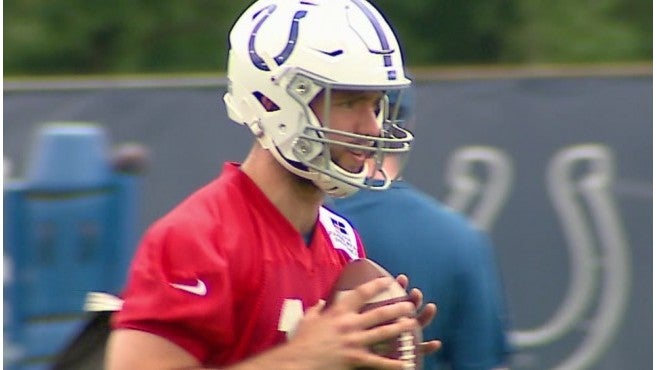 INDIANAPOLIS (WISH) – For the second straight day, we had a visual on Andrew Luck.

The Indianapolis Colts did not allow cameras to capture the big moment, but it happened. Luck threw a real NFL football to real receivers, which publicly is a first this offseason.

“I’ve thrown a real football, ‘The Duke,’ whatever you want to call it,” Luck said Tuesday. “I’ve picked it up and I’ve thrown it and it felt great. And, honestly, there was a little mental block to doing it and I had to do it sort of by myself.”

“Sorry, I confess,” Colts Head Coach Frank Reich said Tuesday. “It really was hard for me to say that. I just want you to know…. There was one day he called and there was no one around here. He did his normal routine and then the only thing that was different at the end in there was a ball. He said ‘Hey, what do you think? Let’s just pick this up and throw this around a little bit.’ So that was it.”

After uncovering Luck and Reich’s secret meeting, first-year offensive coordinator Nick Sirianni pulled back the curtain back even more Wednesday. Sirianni could not stop himself when asked about Luck’s talent in the film room.

“That’s something that you always say to your players, however we communicate that with them,” Sirianni said. “I know a lot of times it’s like, ‘Hey, we’re not going to be there with you on Sunday!’ … But Andrew is going to be. That is huge. Again, I just think he can come out and be a successful offensive coordinator tomorrow just because of his football IQ and his football knowledge and his way to lead.”

With this new offense in a holding pattern until Luck’s return under center, an interesting development surfaced Tuesday when T.Y. Hilton revealed there are no plans for the four-time pro-bowler and Luck to work together before training camp begins July 25 in Westfield.

“I was just proud to see him out there throwing the football,” Hilton said. “I’m excited for him. I know he’s excited and happy to be throwing…. I just told him to take his time there is no rush.”

Adjust your watch to Luck time. Everyone is on it at the moment.