Wal-Mart brings back greeters at the store door 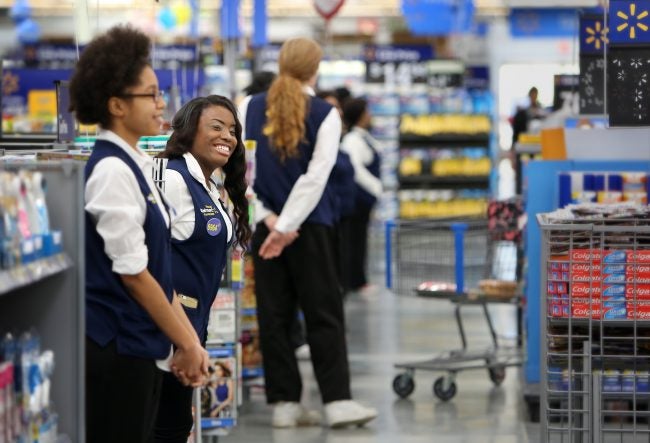 NEW YORK (AP) – Those smiley door greeters are back at Wal-Mart.

The nation’s largest retailer said in a blog post this week that it’s bringing back door greeters to a majority of its 5,000 stores by mid-summer to improve customer service. For stores which have been selected as higher risks for thefts, Wal-Mart will position a “customer host,” who will not only greet customers but also check receipts to prevent theft. That was flagged as a growing problem last year. Those workers will be trained to help deter potential shoplifters.

Four years ago, the discounter decided to remove the workers at the front of the store and relocated them to other areas.

Greeters were a tradition that its late founder Sam Walton started.

The move comes as the Bentonville, Arkansas-based retailer is working to improve sales and service amid fierce competition from outlets ranging from dollar stores to online leader Amazon.com. The company has seen gains for a key revenue measure for six straight quarters at its Wal-Mart U.S. division, but the increases have been mostly small.

“Providing customers with an excellent first impression is part of Wal-Mart’s broader strategy to ensure simpler, more convenient shopping,” wrote Mark Ibbotson, executive vice president of central operations for Wal-Mart’s U.S. division on the blog. “Focusing more on our greeters is one of a whole host of details we’re looking at – it just happens to be a very visible one.”

Wal-Mart is aiming to boost sales by improving the experience in the store through other ways as well. It has increased wages for its hourly workers, made the stores cleaner and has opened up more cash registers during busy times.