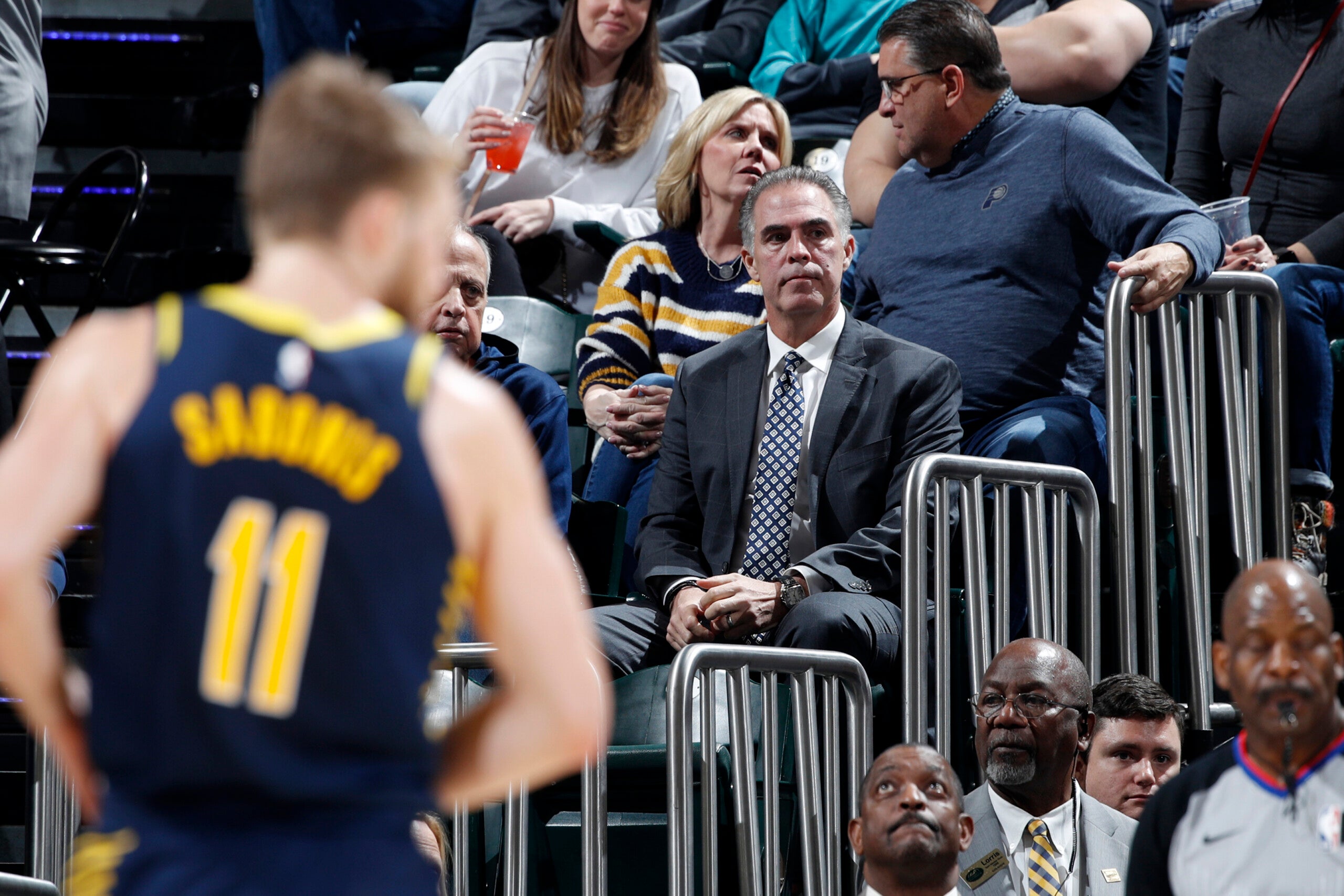 INDIANAPOLIS, IN - FEBRUARY 01: Indiana Pacers director of basketball operations Kevin Pritchard looks on during a game against the New York Knicks at Bankers Life Fieldhouse on February 1, 2020 in Indianapolis, Indiana. The Knicks defeated the Pacers 92-85. NOTE TO USER: User expressly acknowledges and agrees that, by downloading and or using this Photograph, user is consenting to the terms and conditions of the Getty Images License Agreement. (Photo by Joe Robbins/Getty Images)
by: Charlie Clifford
Posted: Aug 31, 2020 / 10:07 PM EST / Updated: Aug 31, 2020 / 10:11 PM EST

On a Zoom call with local Indianapolis media there was only one voice. Pritchard’s long-time teammate, dating back to their days together in Portland, is gone.

To Pritchard’s credit, there were no excuses.

“In any major move that this organization makes, ultimately, I am going to consult with Herb (Simon),” Pritchard said. “Him and I have a daily dialogue, not only on the big decisions, but the little ones too. But at the end of the day, the buck stops with me. That was on me. It was my decision and I take full responsibility for that.”

Despite his lone All-Star this season Domantas Sabonis being stuck in Los Angeles for most of the summer rehabbing plantar fasciitis, Pritchard didn’t play that card on Monday, either.

No excuses about who was on the floor against the Heat, just analysis of the ugly result that followed.

The surprising result of a lopsided four-game sweep is ultimately what did McMillan and his offensive philosophy in.

A philosophy that worked in the regular season despite massive injuries, a rotating cast of core players, and a foundation that didn’t rely on the three-point shot.

But the ability to sell that vision into a brighter Pacers future, legitimately contending in the Eastern Conference, never happened.

Pritchard wants a voice that connects and resonates with today’s NBA players at an elite level. Being an expert communicator with the locker room is one of Pritchard’s top priorities during the head coaching search.

“I don’t want to go into the particulars, because I respect Nate so much. What I will tell you is, we want to be better than get swept in the playoffs,” Pritchard said. “When you look at the playoffs, I wanted to have some hope that we could win a game. If you really look at those games, it is easy to point the finger and I am not (doing that). I take full responsibility.”

“Our best game against them was nine points (loss) and I remember that game, that really didn’t feel that close.”

For Victor Oladipo, there was plenty of praise for the two-time all-star’s decision to play inside the bubble.

With the year ahead for the club and its franchise cornerstone, this was to be expected.

What will happen from here?

It all hinges on the value Oladipo can recreate for himself on the floor this upcoming season, his final year under contract in Indiana.

“Victor and I have a good dialogue,” Pritchard said. “We were actually communicating yesterday. He has a year left. It is easy to jump the gun and say, ‘You have to do something, you have to do something.’ For me, he has a year left. I want to have a great relationship with him, but I have a great relationship with all of our guys.”

“I thought it was really beneficial for him to come back and play because he kind of dusted off some rust. I thought he started to look like the old Victor… I know, for a fact, he is going to get back and I would be surprised if he wasn’t working out today to try to get back.”

“We don’t feel any rush to make a quick decision on Victor, we have him for another year, after next year we can engage in negotiations. But it will be up to him.”

Back to Oladipo’s next head coach, Pritchard is leaving all options on the table early in the search.

It’s a franchise that Pritchard clearly has a ton of respect for.

For now, he has his own decisions to make. And it all starts with a new head coach.