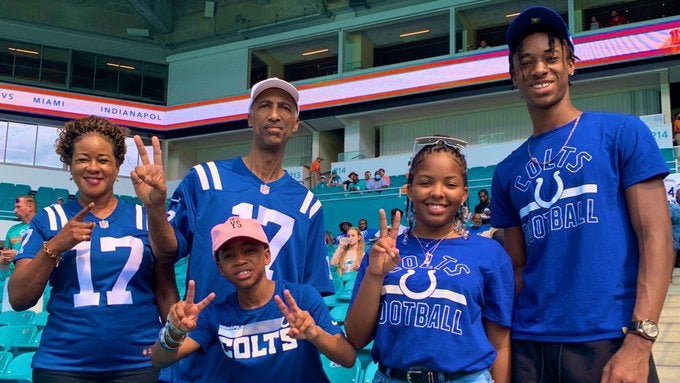 INDIANAPOLIS (WISH) — What were the odds of this dream coming true?

We watched a fearless approach as he quickly became the most talked-about diamond in the rough at Colts training camp this past August.

Heck, his NFL debut was camouflaged by two critical catches in traffic as quarterback Carson Wentz attempted to pull off a late comeback against Seattle during his Colts debut.

The rally fell short, and Strachan has since shuffled out of coach Frank Reich’s wide receiver rotation, but there is still a very bright future in Indianapolis for the 24 year old.

Strachan’s selection in the final round of April’s NFL draft was an historic one; he became only the third Bahamas-born player drafted by an NFL team.

Instead, this is simply the latest pillar on a bridge from the Bahamas to wherever Strachan sees fit.

Earlier this season, we witnessed how it all started.

It made for one of the most special road trips the NFL will witness this season.

2 schoolteachers from the Bahamas

This was all originally Jerome Strachan’s dream.

Back in the day, Jerome Strachan could play some serious ball.

Jerome, a gifted athlete in the Bahamas, chased his football dreams to Bethune-Cookman College in the early 1980s.

His professional football aspirations did not materialize, and Jerome returned to the Bahamas to start his family.

Decades later, here comes his son Mike, a star athlete in the Bahamas, looking for a path forward on the football field.

In high school, the big decision came when Mike left home and moved to the United States. The University of Charleston in West Virginia opened the door to play Division II ball, and Mike took it.

And then tragedy struck the Strachan’s homeland.

In late August of 2019, Hurricane Dorian made landfall in the Bahamas as a Category 5 Atlantic hurricane, becoming the most devastating tropical cyclone in the country’s history.

Strachan was on campus in West Virginia, anxiously awaiting communication from his parents and extended family in Freeport.

He didn’t yet know the herculean effort Jerome was in the middle of.

By the grace of God, this story was relayed from father to his son in the United States.

“He (Jerome) had to walk out and pick up his mom, my grandmother, from her house. She couldn’t move, and with the floodwaters, she had to stand on top of her dresser.”

“He had to run in the water, basically was swimming, because she called. She doesn’t know how the call went through because all of the phone lines were down, but somehow it went through, thank God.”

“Thank God for that. He was able to go and save her life.”

‘I had to hold myself from crying’

Back home this fall, schoolteachers Jerome and his wife Sheba continued to raise their family, never getting the chance together to watch Mike play football stateside.

That changed Week 4 in Miami.

As part of a surprise announcement live on the NFL network, Mike Strachan learned during a national TV with Kyle Brandt that his parents were being gifted free airfare from Bahamas Air to travel to Miami to watch the Colts battle the Dolphins.

The plan went off without a hitch, and upon arrival at Hard Rock Stadium, a usual pregame warmup transformed into a celebration of this Disney-like underdog NFL story.

“I had to hold myself from crying almost,” Mike Strachan said. “Finally getting to see all of them, and they all have their Colts jerseys on. That was awesome.”

In the stands, Dolphins fans began to figure out something special was playing out here and offered their congratulations to the family seated behind the visiting sideline.

Jerome and Sheba Strachan were almost at a loss for words.

“I am super proud of Michael,” Sheba Strachan said. “My heart is full for him because Michael has always been a hard worker, and he has always put his best foot forward. I am just happy. I am overwhelmed. I just don’t know what to say.”

“I am just elated,” Jerome Strachan said. “This is really just a blessing for us. We are a family of faith, and we just thank God that he has opened this door and allowed me also to live my dream through my son Michael.”

Looking around the teal seats at Hard Rock Stadium, taking in the pageantry of an NFL Sunday, everything, including a convincing Colts victory, lived up to the hype.

“The amount of people from Freeport (Bahamas) where we live, this stadium could hold all of them,” Sheba Strachan said. “To be in an atmosphere of so many people, it is just amazing to me.”

“To know that my son is on the center stage of all of those people? It just blows my mind. It is just unbelievable.”

Strachan saw the field on a handful of plays, but his highlight reel plays will certainly be saved for reunions down the road.

“32 teams, I could have gone to any team, and God had it that I went to the Colts,” Mike Strachan said. “I couldn’t have been in a better place. The family culture we have here with the Colts is just tremendous. It is truly a blessing.”

Regardless of where this goes from here, Michael Strachan made it.

And if you know anything about Michael Strachan, there are no little plans for what happens going forward.