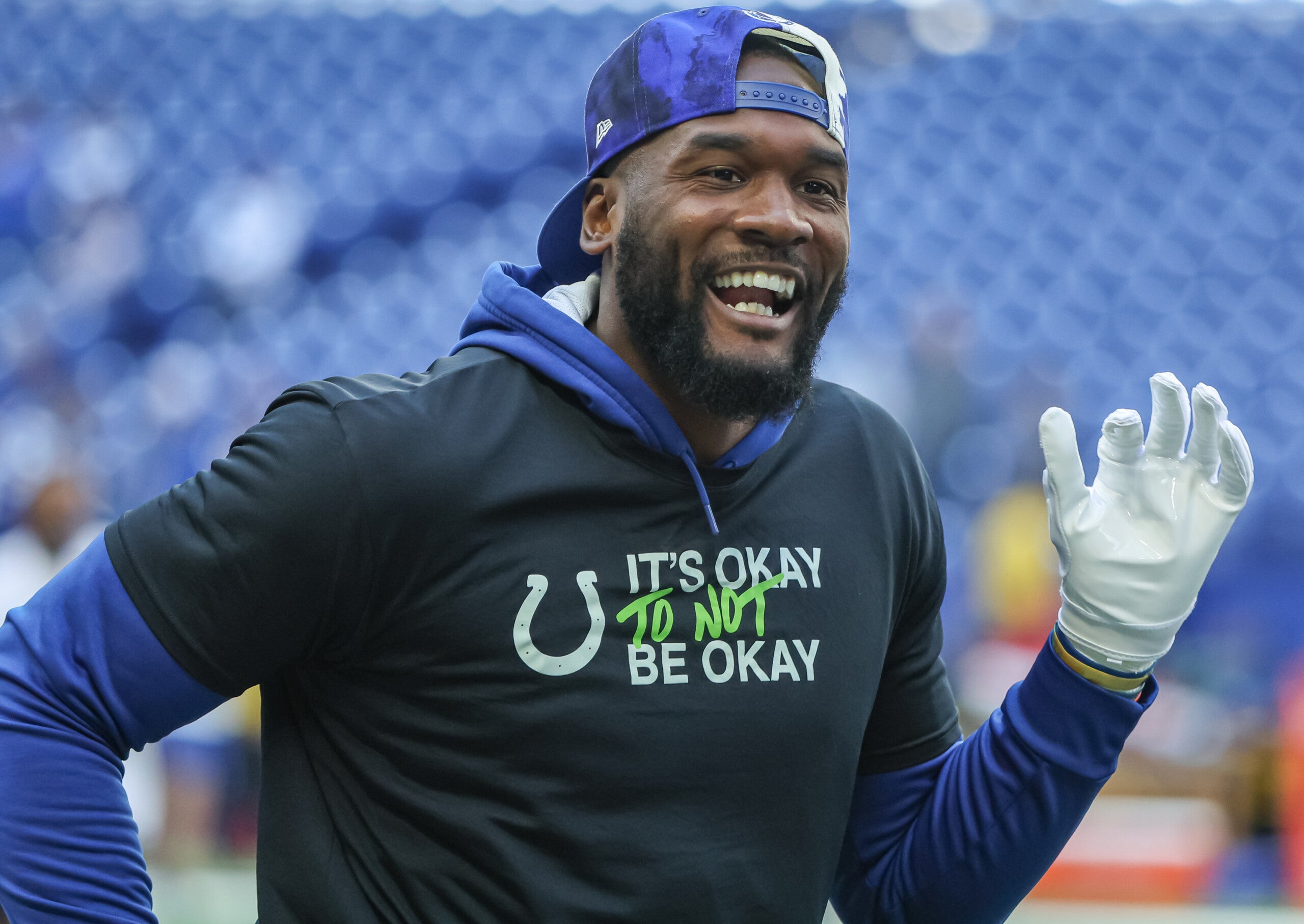 INDIANAPOLIS (WISH) — Despite undergoing season-ending back surgery six days before, Indianapolis Colts All-Pro linebacker Shaquille Leonard stood with a smile on his face Monday night on the west side of Indianapolis as host of the fourth annual Maniac Thanksgiving Giveaway.

Leonard, with the help of volunteers, the Colts, and Gleaners Food Bank of Indiana, delivered 200 free Thanksgiving meals to local families ahead of the holiday.

“I know what it felt like to not have much,” Leonard said. “If I can be a blessing, put a smile on their face? I just hate to see a family around the holidays worrying about if they are going to have enough money for food. It is all about quality time with family and being thankful.”

In 2020 Leonard and his wife Kayla started the Maniac Cares Foundation, aiding education and wellness services in central Indiana and their hometown of Lake View, South Carolina. Backed by the emotional support of his family, Leonard now embarks on a second rehab from back surgery in six months.

This time, the hope is that a lingering nerve issue resolves itself during rehab, leading to Leonard regaining his elite burst and agility on the field next season.

The three-time all-pro admitted Monday that his life currently feels like June all over again.

“Yes, it does feel like I am back to square one,” Leonard said. “But luckily, having the surgery once before, I know what to expect. I know maybe, I pushed it a little too quick. Now, I actually have time for true rest and to get the proper treatment and the proper recovery for this injury. And hopefully, come OTAs and everything, be ready to rock and roll.”

The immediate plan for Leonard over the holidays will be simple: Take it easy.

“Rest and let the body heal, and hopefully the nerve will get back right, and just go from there,” Leonard said. “Make sure I maintain and be prepared mentally, and emotionally, and then when the time comes, physically just be ready for that.”

Following Leonard’s final game of the season earlier this month, New England head coach Bill Belichick commented that the savvy linebacker was calling out the Patriots’ offensive plays before some snaps. This tip of the cap to Leonard’s film study habits remains an asset over the final six weeks for the Colts, as the 4-6-1 team attempts to pull off a miraculous late-season turnaround under interim head coach Jeff Saturday.

“I want to have a big impact,” Leonard said. “I still want to study tape and point out tendencies to help these guys (on defense) win. Because as I told DT (David Thornton) today, it is all about wins and losses. No matter what it is, you are going to be judged by wins and losses, and I want to be a winner. Whatever role it has to be, I am going to step into that role and be the best at it.”

2022 will undoubtedly go down as the most frustrating season of Leonard’s professional career. Following back surgery on June 7 that attempted to clear up a nerve issue linked to lingering ankle issues, Leonard sat out of all team activities until Aug. 31.

On Oct. 2, Leonard made his season debut for the Week 4 matchup against AFC South rival Tennessee and suffered a concussion and fractured nose during a collision with teammate Zaire Franklin late in the first half. After missing three more games, Leonard returned to action for Week 8 and Week 9, playing 58 total snaps during losses to Washington and New England.

Following a setback in practice on Nov. 9, Leonard was placed on injured reserve and underwent a second back procedure on Nov. 14.

In total, Leonard saw the field for 74 snaps this season.

Despite this, Leonard says he remains in a good space ahead of the Thanksgiving holiday.

“Just thankful, all the ups and all the downs, to still be where I am at in life,” Leonard said. “I just look at it with a clear-eye view. A lot of people would want to be in my position. Just be happy, and just be thankful for everything that I have in my life. Just continue to try and be a blessing. That is what my mind will be on, on Thanksgiving.”

The 27-year-old said he continues to draw on his own advice to Colts wide receiver Parris Campbell and defensive end Tyquan Lewis over the past few seasons.

Campbell, who played in just 15 games over his first three NFL seasons due to injury, and Lewis, who is dealing with his second season-ending knee injury in as many seasons, heard from Leonard often throughout their lengthy rehabs.

This winter, Leonard is looking for his own boost from a locker room that remains unified despite Frank Reich’s midseason firing.

When asked what he wants to tell Colts fans ahead of Thanksgiving, Leonard shared this message:

“For one, just continue to pray for me,” Leonard said. “Just continue to keep me in your thoughts. And embrace the new change, embrace Zaire Franklin who is doing a great job stepping up. Just be behind those guys. That is really what it comes down to, no matter who has the horseshoe on their helmet, if they are on that field, give them everything that you got. Just know that they are going to give everything they’ve got for this organization, for this team, and hopefully, each week put the best foot forward and get a victory each week.”

For the doubters who are questioning whether Leonard will be able to return to form next season, as you may have guessed, the former second-round pick turned NFL Defensive Rookie of the Year is listening closely.

“I just make sure mentally that I understand that I am still The Maniac, and I still believe that I have the capability of going out there and making plays,” Leonard said. “Just know that I keep every receipt of everything someone says about me. I am looking at the tweets, I am seeing everything, and I am just ready to go out and prove everybody wrong once again.”