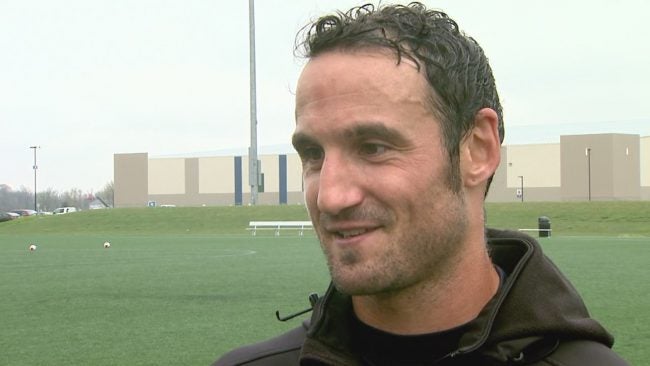 “There’s no better feeling than scoring a late goal to win a game,” Zayed said after the win. “It doesn’t happen very often.”

He not only scored a dramatic game-tying goal in the 90th minute, but he was there to put in the game-winning rebound in the 95th minute. Zayed’s heroics are making memories for the Indy Eleven, earning him NASL player and goal of the week honors.

“It was unbelievable, especially towards to Brickyard Battalion and with all the fans, it was an amazing feeling to do that.”

Zayed, born to a Libyan father and an Irish mother in Ireland, has spent most of his career in Europe and Asia. He is one of a handful of veterans new coach Tim Hankinson has brought in to jump start a team that’s yet to live up to expectations heading into its third year, and the striker is excited about being part of it.

At 32 years old, Zayed’s first opportunity to play in the United States is here and now, and he wants to make the best of it.

“The idea of coming to America, the land of opportunity, football has grown, soccer as you call it in America, has grown a lot I feel. And I want to be a part of that if I can. Day one, I’ve enjoyed it, I’m loving it at the moment,” he said.

His coach is happy that time is now. “You get to a point in your career and say, ‘How do I want to spend the final years, and where?’ And it’s always been a dream of his to play here, and the timing was right for both he and the Indy Eleven,” Hankinson explained.

Zayed and the Eleven are back on the pitch Saturday night at Oklahoma City.