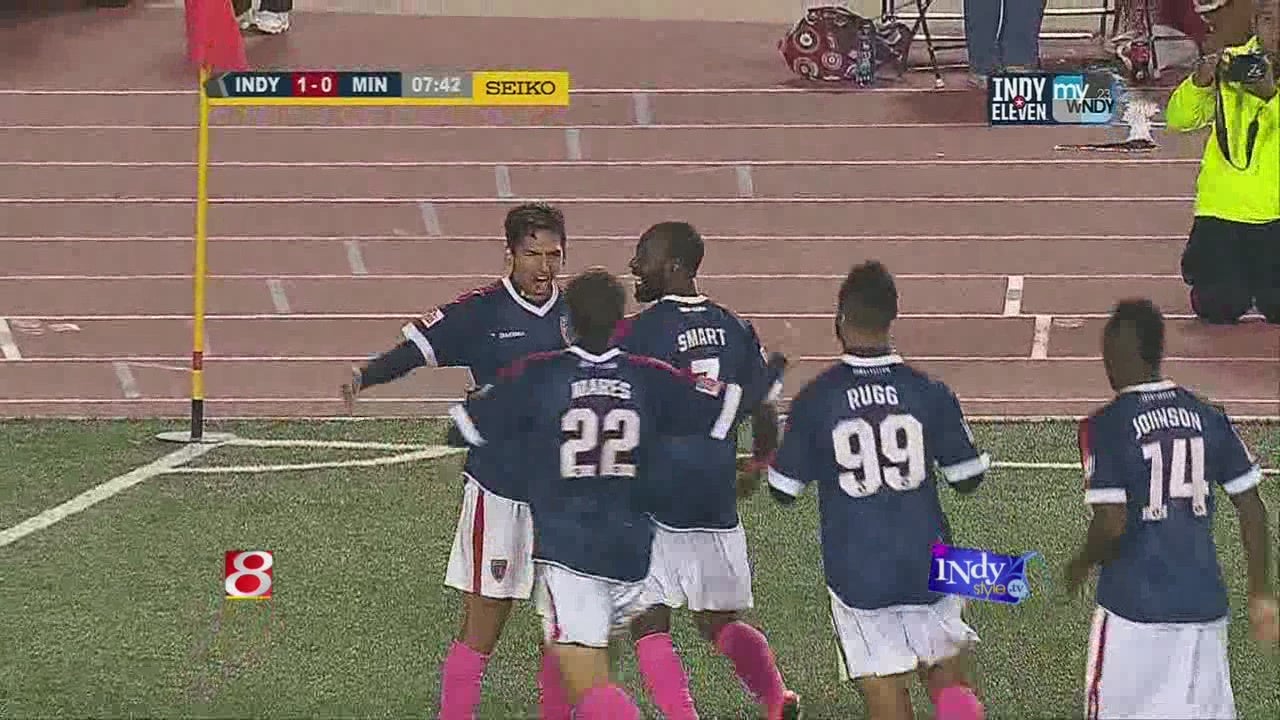 Home opener for Indy Eleven vs the New York Cosmos is coming up on Saturday at 7:30pm and will be seen on WISH-TV.

It is an honor…try to lead by example and do the right thing. We are excited to get back in front of our home fans.” Greg Janicki, Defender and New Team Captain

The Indianapolis area will be abuzz leading up to the collegiate final of “that other sport with a round ball” that Hoosiers love so much. Feeding off that energy, Indy Eleven will reward fans across the area with opportunities to seek out various prizes during an Indy scavenger hunt, which will include giveaway items, official team merchandise and tickets to the home opener vs. New York! Fans will be asked to stay tuned to the team’s social media channels to receive clues throughout the day.Tuesday, April 7 – Social Media Day

Indy Eleven will be “virtually everywhere” throughout the day on Tuesday, when players and personalities will infiltrate the club’s Twitter, Facebook and Instagram homes, host a Reddit AMA session and more. Again, check out the team’s social media channels for a full itinerary as Tuesday approaches.Wednesday, April 8 – BYB Gold Membership Town Hall Meeting

Brickyard Battalion Gold Members will have the chance to rub elbows with the Indy Eleven leadership trio of owner Ersal Ozdemir, President/GM Peter Wilt and head coach/director of soccer operations Juergen Sommer during a special town hall event at the Indy Eleven Theater on Mass Ave.

The event will be moderated by TV play-by-play voice of your Indy Eleven and 1070 The Fan “Soccer Saturday” host Greg Rakestraw and will also feature appearances by a pair of the “Boys in Blue” and a raffle contest for a team-autographed 2015 alternate jersey. BYB Gold Members can arrive starting at 5:45 p.m. to pick up their 2015 gift packages before the Q&A session and season preview begins at 6:15 p.m.

Click here to see how to become a BYB Gold Member and then click here to register for this exclusive event (just 10 spots remain as of April 2).Thursday, April 9 – IPS School Assembly, presented by Church Brothers Collision Repair

Select Indy Eleven players will interact with students at IPS Carl Wilde School 79 on the city’s west side Thursday afternoon as part of the team’s ongoing IPS School Assemblies series, presented by Church Brothers Collision Repair. The event will include a Q&A with both players in attendance, a banner-building workshop, inflatable target kick game and other activities that will get the Carl Wilde students on their feet and staying active alongside the “Boys in Blue”.Thursday, April 9 – Indy Lemonade Day “Game Show Night”

It’s back to the Indy Eleven Theater on Thursday night, when Peter Wilt will join fellow local celebrities for a night of good clean fun during Lemonade Day Indy’s “Game Show Night” – featuring a take on the 90’s family game show, Double Dare. Tickets for this kickoff event for Lemonade Day Indy’s 2015 campaign are available now for $20. Click here for more details, including the full list of participants and information on how to secure your spot at the newly-renovated home for IndyFringe events on this special night!Friday, April 10 – Wear Your Colors Day

Indy Eleven asks all supporters to don the red, white & blue of their beloved club on Friday. You could be rewarded for your smart fashion sense, as the team’s mascot, Zeke, will be roving the city in the team’s Honda Odyssey and passing out Indy Eleven prizes to fans sporting Eleven their gear!Saturday, April 11 – Home Opener vs. New York Cosmos – 7:30 p.m.

Finally, the time to “Pack The Mike” once again appropriately falls on the 11th, when Indy Eleven welcomes the New York Cosmos to the Circle City for a 7:30 p.m. kickoff at IUPUI’s Michael A. Carroll Stadium. After going undefeated against the Cosmos with three draws last season, Indy Eleven will look for their first win against the storied franchise, which features legendary Spain National Team and Real Madrid striker Raul. Early birds arriving at Carroll Stadium will be rewarded, as the first 5,000 fans through the gates will receive an Indiana-shaped 2015 Schedule Magnet, courtesy of WISH-TV and Visit Indiana.

Tickets are going fast but remain available. Purchase yours online at http://cosmos.indyeleven.com or over the phone by calling the Indy Eleven Front Office at 317-685-1100 weekdays from 9:00 a.m.-5:00 p.m. ET. Check out the details at www.indyeleven.com

WISH-TV is the home for Indy Eleven home games in 2015.

1 Away game broadcast starts at 7 p.m. Replay might move to WISH-TV.