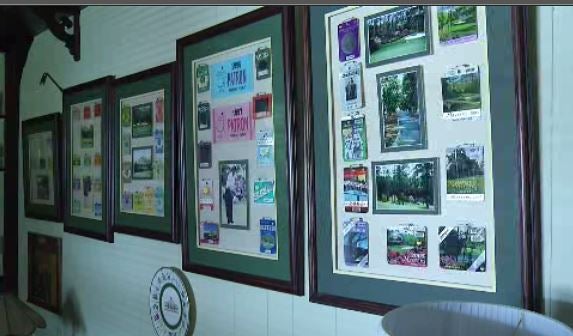 So many people hope to walk the grounds of Augusta National Golf Club just once in their lifetime.

Juanita Scott has been a golf patron at The Masters Golf Tournament every year for decades.

Scott has a mini museum in her downstairs living room, full of Masters memorabilia.

We took a trip with her down memory lane about her first time down Magnolia Lane.

“We came home, had lunch and he said,’Let’s go out to the Augusta National and I said what’s that?’” remembers Scott.

Scott is talking about her first trip to The Masters Golf Tournament she took with her husband back in 1955.

Since Scott’s first trip with her husband, Scott has been attending The Masters every year for the past 61 years.

“He already had the bug, but I got the bug that day,” said Scott.

Scott has the badges to prove it and with each badge comes a memory.

One memory she says she’ll always remember- when Roberto De Vincenzo signed an incorrect score card at the 1968 Masters Tournament.

“The look on his face when they told him or he realized what he had done was something I will never forget,” said Scott.

While she’s laid eyes on many golfers who’ve played the Augusta National Golf Course, one player remains her favorite.

“My favorite person is always Gary Player because he is such a gentleman,” said Scott.

Scott has bought numerous Masters memorabilia over the years but there are some items she has that you won’t find in the gift shop, like two custom rings her husband made for them to wear each year before he passed away and a Masters Champions menu signed by 17 players.

“I’m very very proud of it. I had it framed but the light was fading the signatures,” said Scott.

While she says the course, the fashion and the crowd has changed over the years, one thing has remained the same.

“The etiquette at The Masters is far above any other golf tournament in the world. When I watch golf on the television and the people are doing the things that they do, I say ‘Mmm,mmm… that would never happen at The Masters,” said Scott.

If you’re lucky enough to walk on the hallowed grounds of Augusta National, you can catch Scott at the 18th hole, above the sand trap this Sunday for her 63rd year.