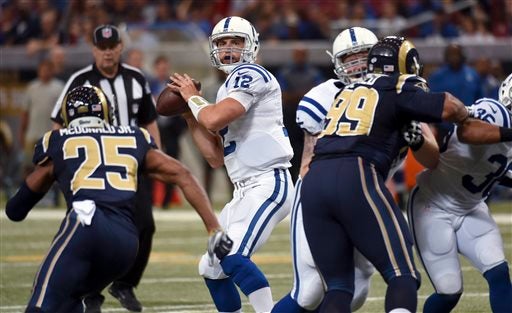 ST. LOUIS (AP) – Andrew Luck threw his first touchdown pass of the preseason, helping the Indianapolis Colts get off to a fast start in a 24-14 preseason victory over the St. Louis Rams on Saturday night.

Nick Foles got his first TD pass in Week 3, too, hitting Chris Givens in stride on a 44-yard play in the second quarter for the Rams (0-3).

Adam Vinatieri had a big day for the Colts (1-2), hitting field goals on the first and last possessions of the half, plus his successful onside kick led to Andre Johnson’s 32-yard reception for a 10-0 lead midway through the first quarter. Then he put it out of reach with a 55-yarder with 2:53 left.