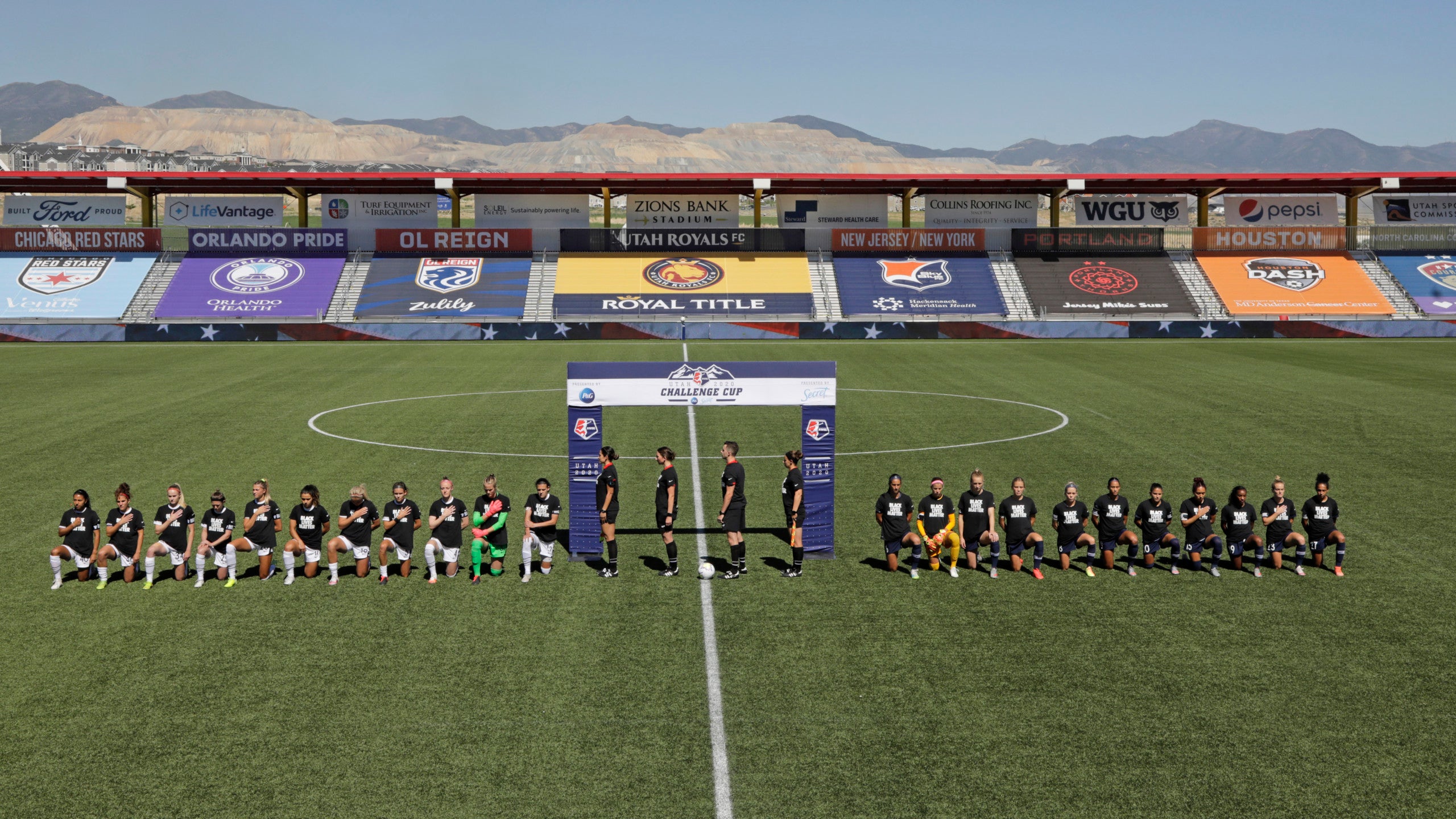 (AP) — Players for the Portland Thorns and the North Carolina Courage knelt during the national anthem Saturday when the National Women’s Soccer League opened the Challenge Cup tournament in Utah.

The players and coaches wore Black Lives Matter T-shirts in warmups before the game, which was nationally televised on CBS. The players also knelt during a moment of silence before kickoff.

“We took a knee today to protest racial injustice, police brutality and systemic racism against Black people and people of color in America. We love our country and we have taken this opportunity to hold it to a higher standard. It is our duty to demand that the liberties and freedoms this nation was founded upon are extended to everyone,” the Thorns and Courage said in a joint statement released before the game.

The league confirmed the day before that it would play the national anthem before the Challenge Cup games and that it would support the players in whatever they chose to do.

During the late match between the Red Stars and the Washington Spirit a few players remained standing. There was a touching moment when Chicago’s Julie Ertz consoled teammate Casey Short, who was overcome by emotion.

The NWSL is the first professional team sport in the United States to return amid the coronavirus outbreak. The monthlong Challenge Cup is being played without fans at Zions Bank Stadium in Herriman, Utah.

“Today, hopefully, it was a powerful statement,” Courage midfielder Sam Mewis said after her team defeated the Thorns 2-1. “It was an emotional time and I hope that both teams’ message comes through clearly.”

Thorns defender Becky Sauerbrunn said: “The (players’ association) has been about collaborating with teams on what we can do to maintain and sustain the conversation around racial injustice in this country.

“We made a strong statement and we wanted to kind of maintain that momentum that has been happening and to show official commitment to the cause,” she added.

Megan Rapinoe, who plays for OL Reign but opted out of the Challenge Cup, was criticized when she knelt at an NWSL game and a pair of U.S. national team games in 2016. She said she wanted to express solidarity with former San Francisco 49ers quarterback Colin Kaepernick, who took a knee during the anthem to bring attention to racial inequality.

In response, U.S. Soccer adopted a rule that required players to stand. But that rule was repealed earlier this month amid nationwide protests over the death of George Floyd and racial inequity.

Rapinoe voiced her support for the NWSL players Saturday on social media: “You love to see these women using their voice, demanding better for America, and for black people and people of color.”

Spirit Coach Richie Burke joined his players in kneeling before the late game.

“I’m grateful for everything this country has given me, but I feel the need to support the Black Lives Matter movement because I know this privilege isn’t the same for everyone. This is just the start. There is much more work to be done,” Burke said.

Mewis said the teams will continue to call attention to racial injustice throughout the Challenge Cup.

“I think we want to keep this momentum and keep the attention on the Black Lives Matter movement throughout this tournament,” she said.