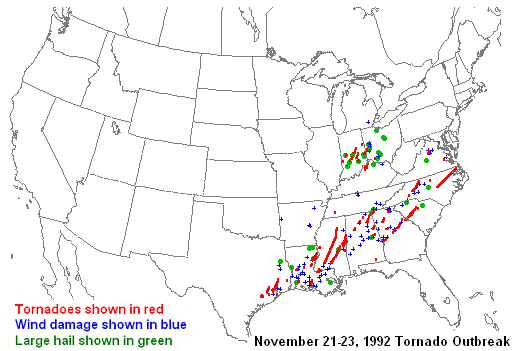 This outbreak saw a staggering 95 tornadoes touch down over a 41-hour period from Nov. 21-23, 1992. Published studies over time, however, have indicated that there could have been even more tornadoes that were spawned.

A low pressure system in Texas on Saturday, Nov. 21 gave way to favorable supercell development in and near the Houston, TX area. The development of potent supercells led to 14 tornadoes touching down in southeastern Texas, and six of these tornadoes hit the Houston area alone.

Three of the six tornadoes that occurred in the Houston area were significant to violent. The F2 that touched down in downtown Houston nearly struck Rice University. Then, an F4 would cause heavy damage in Channelview. It is only one of two F4s to have ever hit the greater Houston metropolitan area on record.

The low pressure system in Texas and associated tornadic activity would serve as a precursor for what was to come over the next 36 hours.

Going into late Saturday night, the system would next produce ten tornadoes in Louisiana. Nine of those were rated F2 and F3, and no one was killed in Louisiana. However, Mississippi was about to be dealt the hardest blow out of anyone in this outbreak.

Additional cells would form and move into southern Mississippi. This lead way to 15 more tornadoes being produced in the state itself with two of them being violent. The first violent F4 would become the longest-tracked and deadliest tornado of the entire outbreak as it devastated portions of Rankin, Scott, Leake, and Attala counties. The city of Brandon was especially hit hard with numerous homes and 30 mobile homes destroyed.

The Brandon, MS tornado stayed on the ground for nearly two and a half hours with a 128-mile path length. Twelve people were killed with ten of the fatalities occurring in Rankin county alone. A second F4 tornado would track for 40 miles from Wisner, MS to Newton, MS. By the time the activity left Mississippi, 15 people had lost their lives in the state.

The low pressure system would race into Illinois on Sunday, Nov. 22, and this would open the floodgates for widespread active weather. Through much of Sunday morning, 13 tornadoes hit Alabama with six being rated F2. It wasn’t long before more violent weather brewed with more potent storms developing in Georgia.

A violent tornado (F4) caused major damage in and near Marietta, GA and Kennesaw, GA with hundreds of homes/businesses damaged or destroyed. There is the possibility this could have consisted of twin tornadoes as well. Next, Dahlonega, GA would take the brunt of an intense F3 in which several people who survived the tornado were carried 65 to 300 yards in the air. One person was killed as this tornado heavily damaged homes, cabins, stables, and the lodge.

By the mid to late afternoon hours, another violent F4 would carve a path from Etheridge, GA to White Plains, GA in which five people died. Then, the second longest-tracked tornado of the outbreak began in Amity, GA and traversed a 67-mile path to Jenkinsville, SC with one person being killed. As this long tracked F3 was on the ground, another significant tornado paralleled close to the F3’s track.

Even Indiana was under the gun on Nov. 22 as 14 tornadoes caused havoc across central Indiana. There was even an F4 that went into far southeastern Indiana near the community of Antioch. That tornado started just northeast of Louisville in Worthville, KY. The number of intense tornadoes Indiana had was bewildering because the storm mode was not lone supercells. We’re talking broken line segments that moved through and caused big trouble.

Cities such as Ellettsville, Fincastle, Paragon, northeast Indianapolis, and Shelbyville were impacted by F3 tornadoes. Other significant tornadoes would take place in and/or near Lapel, Waynesburg, Morristown, and Liberty. Thankfully, nobody was killed in Indiana despite the strength of the tornadoes.

By the morning of Nov. 23, the outbreak was winding down, but there was one tornado that morning that was rather remarkable. However, there is some scrutiny with the final path length. In North Carolina, the longest-tracked tornado in the state’s history was measured to have been on the ground for a mind blowing 160 miles from Barclaysville to Elizabeth City. There is an asterisk as this was potentially a tornado family that was surveyed by inexperienced surveyors.

The Nov. 21-23, 1992 tornado outbreak still remains as one of the largest tornado outbreaks to ever take place in U.S. history. This event is sometimes referred to as “The Widespread Outbreak”. In all, 26 people were killed along with injuring over 600 others.