Carmel’s own European opera star returns to the Palladium 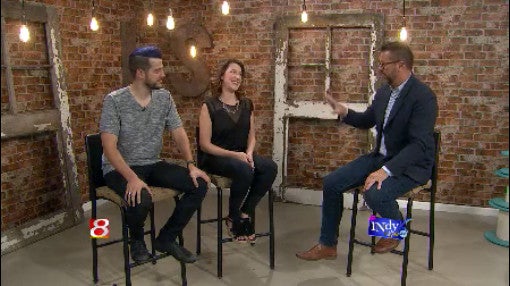 Carmel’s own Bryn Chapman Vertesi, an American soprano who has been living and singing in Europe since 2009, will return to the Palladium to sing with the Indiana Wind Symphony in a special event that will include her husband, bass Campbell Vertesi. The program, “Dreams of Italy” will be Friday, May 26 at 7:30 p.m.

Bryn and Campbell are best known for their work with The Cast, the genre-busting “opera band” which has kept them on tour across Europe for the last three years. The group of six opera singers perform concerts in a fun and relaxed atmosphere, in venues from intimate cabarets to some of the most prominent theaters in Germany.  The band was the subject of the 2014 documentary film, Operatic, and they are presently working on their second live album.

Bryn was born in Carmel and lived here until 7th grade. After a few years in Louisville, she moved back to graduate from Carmel High School in 2000. She went on to study voice at the prestigious Jacobs School of Music at Indiana University, where she met Campbell.

The pair spent several years performing with opera companies and festivals across the United States, including Cincinnati Opera, the Cincinnati Symphony Orchestra, Dayton Opera, San Francisco Lyric Opera, and Utah Festival Opera. They were also invited as guest performers to summer festivals in Austria and Italy.  Since Bryn’s European debut in Salzburg in 2007 however, they have performed all over France, Holland, and Germany, eventually moving to Paris in 2009. They presently live with their son in Cologne, Germany.

Bryn, a former Miss Indiana and a Miss America finalist, has performed a wide range of music in a variety of styles, from operatic roles like Pamina in  Die Zauberflöte and Marguerite in Faust, to sharing the stage with Celine Dion and Andrea Bocelli in pop concerts. Campbell’s vocal career is as varied as Bryn’s. A basso profundo with a passion for American spiritual music, he has found his operatic home in roles like Sarastro in Die Zauberflöte, Colline in La Bohème, and Méphistophélès in Faust.

For more information about the concert program and tickets, go to http://www.thecenterfortheperformingarts.org/tickets/production.aspx?PID=5499.

Be sure to follow The Cast on any of the following platforms: