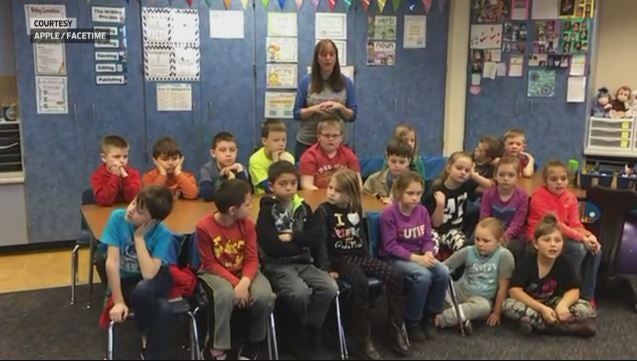 North Vermillion Elementary School teacher Kara Porter asked her students to each submit a question with two possible answers. The 19 questions were then made into a Google Forms survey and posted on the school’s Facebook page Tuesday. The post was shared more than 2,000 times and quickly got the attention of Buzzfeed.

The survey has now been taken more than 300,000 times at such a rapid pace Porter hasn’t even been able to log in to look at submissions because, as she put it, they “broke the internet.”

“It was a little intimidating. I at first doubted that it had actually gotten that big. We were just hoping for parents, grandparents, a few friends of our family and then all of a sudden someone comes to me and says, hey, a Buzzfeed reporter is tweeting about you. I didn’t believe it until I actually got the email asking to set up an interview,” Porter explained to 24-Hour News 8.

After getting such a huge, positive response, Porter says the project originally set to be done this spring break will now likely last the entire school year and broaden their curriculum. She says her classroom will now be learning about cultures of the many countries that have participated in the survey.

“We’re hoping to go a little beyond. we’ve hit some really interesting countries. Look into some of their cultures. We’re definitely going to be plotting this on a map to see how far this went. t’s really opened up a whole new set of things that we can look into,” the teacher said.

Professors from around Indiana and even beyond have volunteered their time in hopes of helping the school synthesize the overwhelming amount of data.