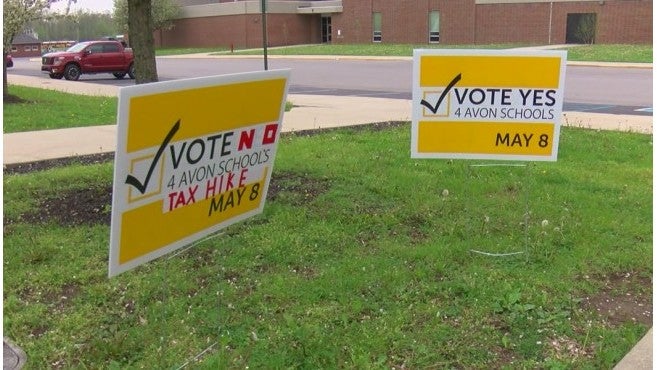 AVON, Ind. (WISH) – Five days before the primary election, the debate over Avon Schools referendum is heating up.

Campaign signs supporting the $9.5 million referendum have been reported stolen and vandalized.

If you drive through Avon you’ve probably seen signs that say “Vote yes 4 Avon Schools,” but at least five of those signs have been vandalized and now say “Vote no 4 Avon Schools tax hike.”

“We just couldn’t believe it. We were just really disappointed and upset,” said Chris Tincher, co-chair for the Vote yes 4 Avon Schools Political Action Committee. “We understand that everyone has their right to disagree and vote according to their conscience, but I think it was taken too far to vandalize our sign.”

Tincher has three kids in the district and supports the referendum, which was designed to fund teacher hiring and raises and allow the district to reduce class sizes.

The chairperson for the “NO more Avon taxes” Political Action Committee was unavailable for an interview, but sent us a statement that said he would never condone vandalism.

“We know the vast majority of people on both sides are great people who are our neighbors, coworkers, and friends. It is very unfortunate that a few would stoop so low and act in such a manner that reflects badly on our town,” said the statement from Carl Blackard, chairman of “NO more Avon taxes.”

“Any time you take a sign in these fashions it can certainly be considered to be theft. Any signs that are damaged, it can be considered criminal mischief. We will be looking at that as we look at our investigation,” Assistant Police Chief Brian Nugent said.

Tincher said he hopes students watching this election learn that vandalism is not the right way to get your message out.

“At the end of the day we are just going to agree to disagree, and people just need to go and vote with their conscience,” Tincher said.