Hundreds of journalists are being laid off, right when the public needs them the most 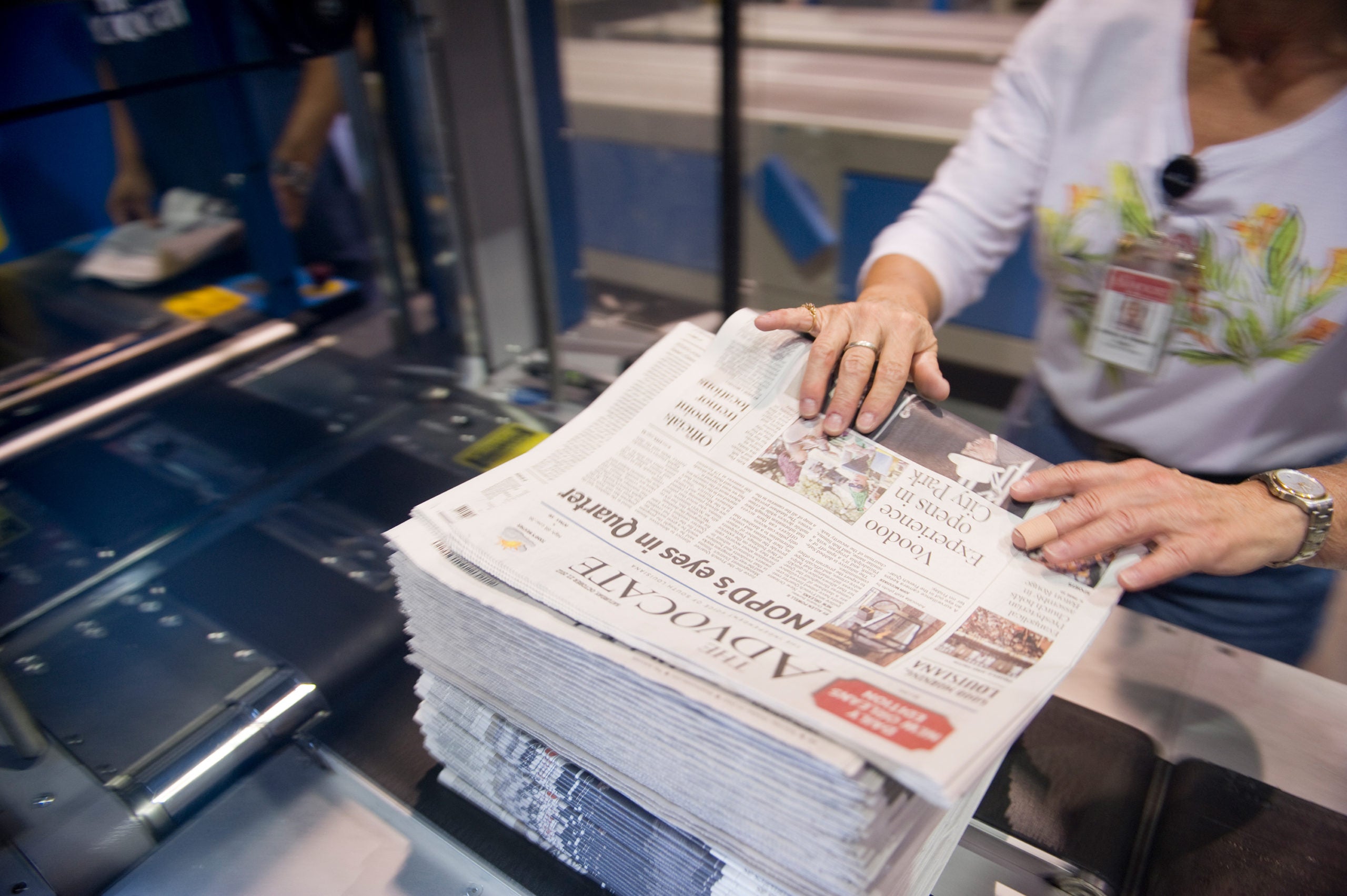 (CNN) — 2020 was supposed to be a banner year for digital media. BuzzFeed, Group Nine, and Vice each indicated that this year they would be profitable, a long-elusive goal for an industry bedeviled by diminishing ad dollars.

But no one could have predicted that a global health crisis would hit just as business was picking up.

BuzzFeed CEO Jonah Peretti told staffers in a memo this week that the company had been knocked off track because of coronavirus.

“Though we were well on track to be profitable this year, the impact of the coronavirus on the global economy will almost certainly cause the company to lose money, even as we take aggressive action to control costs,” Peretti wrote.

BuzzFeed has instituted paycuts and scaled back on travel and hiring. According to the memo, which was obtained by CNN Business, Peretti will not take a salary for the rest of the year.

A record-shattering 3.3 million Americans filed for unemployment last week after residents in many parts of the country were ordered to stay home and practice social distancing. Events were canceled, bars were shuttered, restaurants pivoted to takeout-only, and ad dollars dried up. Many industries are reeling from the ramifications of the coronavirus pandemic, and the already fragile media industry is now under serious threat.

CNN Business reported on Sunday that at least 100 people in local newsrooms in the US lost their jobs in March. By Friday, that number shot up to at least 300 people as the impact of coronavirus continues to roil newspapers and digital media companies.

BuzzFeed avoided layoffs through salary reductions, but that strategy isn’t being implemented everywhere. Future PLC, which owns Laptop Mag, Tom’s Guide, Live Science and other publications, is planning to lay off at least nine employees out of 59 in the union, according to a statement from its union on Tuesday.

Marshall Honorof, an editor at Tom’s Guide who has worked there for seven years, was told last Friday over video chat with a member of the union’s bargaining committee that he was one of the nine “proposed” layoffs. The company is still in contract negotiations with the union. The two sides were supposed to meet on March 18, but that was postponed.

Rafi Letzter, a writer at Live Science and member of Future’s union, told CNN Business that the union is hoping management will find another solution to cut costs -— one that will not require laying off people who he says are crucial to the company’s news coverage.

“There is concern across the board, both in the unit and outside of it, that management does not understand the consequences of some of the layoffs they’ve proposed,” Letzter said. “In many instances, they’re maintaining the accuracy and quality of coronavirus coverage. Everyone is working very hard, frankly, harder than the company has earned from them at this point.”

The sad twist about these layoffs and restructuring is that they come just as the public is hungry for information about the pandemic, but there are now fewer journalists to provide vital information about it. Traffic is up for many sites and TV ratings have increased as people are stuck at home watching the news.

Letzter has written a number of coronavirus news stories and explainers, including one titled “Can homemade masks protect you from COVID-19?” Letzter told CNN Business that Live Science’s site traffic has been the “highest in its history.”

Future executives did not respond to multiple requests for comment. When CNN Business described the urgency to the company’s phone operator, she said she was among those being laid off.

Vox Media, which reported a profit last year, has not announced layoffs or pay cuts. Last week, Chairman and CEO Jim Bankoff told staff that adjustments would need to be made, according to a company memo obtained by CNN Business.

“While there will obviously be impact, at this point it is too early to understand those implications,” Bankoff wrote. “There are already some immediate cost savings that we will see from the suspension of business travel, offsites, work at conferences, and other items.”

The head of G/O Media, the company formerly known as Gizmodo Media Group, which owns Deadspin, Jezebel and Jalopnik, sent a dire email to his staff last week with the subject line “Brace For Impact.”

“This will not be an easy nor fun period for our company let alone just about any other company with our dynamics,” CEO Jim Spanfeller wrote in the email, which was obtained by CNN Business. “I am sure you have all been following the news around the overall economic picture and how disturbing it is, as well as the stock market dive that has been nothing short of terrifying. This will hurt.”

A G/O spokesperson told CNN Business, “There’s been a meaningful uptick in traffic, no layoffs planned and too early to have a clear picture on revenue.”

CNN Business also reached out to Vice and Group Nine about their plans but have not heard back.

Freelancers left in the lurch

As newsrooms seek to cut costs, some have eliminated their freelance budgets. California freelancers were already struggling after a state law went into effect in January that restricted their output to 35 submissions a year per outlet. The law, AB 5, prompted Vox Media to part ways with hundreds of its California-based freelancers.

The stress has only increased in the wake of coronavirus as freelancers are limited not only by newsroom budgets but also by their lack of company-sponsored health insurance. On March 17, Vice published a story by Clio Chang about the perils she could have faced as a freelancer had Vice not recently hired her as a full-time writer.

“Today, I have steady income that will allow me to weather this epidemic for now, without worrying where my next assignment is coming from,” Chang wrote. “While I was lucky enough to have money saved up from previous jobs, the slowdown in work under coronavirus could have been disastrous if I were living paycheck-to-paycheck as many freelancers do.”

Monica Castillo, a freelance film critic and writer, told CNN Business that on March 18 she started receiving emails from small and mid-size outlets she frequently contributed to about budget freezes.

“It’s weird that so many things are changing in the movie industry, and there’s nowhere for me to cover it,” Castillo said. “I’m down to my last three assignments and then once those are done, there’s nothing. I haven’t been this out of work since, I can’t remember when, since maybe the start of my career.”

Local newsrooms continue to face constraints on their business and this especially troubling during a global pandemic with local ramifications. New Orleans is one of the fastest growing hot spots of coronavirus cases in the US. With the sharp increase in cases and hospitals running out of capacity, the community needs access to quality information more than ever.

On Monday, Editor Peter Kovacs and Publisher Judi Terzotis of the The Advocate in Baton Rouge publicly announced they would be “temporarily furloughing about a tenth of our 400-member workforce, and the rest of us will begin four-day workweeks.” The Advocate had absorbed The New Orleans’ Times-Picayune last year after the latter lost more than 150 staffers in a round of layoffs.

Kovacs and Terzotis said on Monday, “Our newsroom, with about 120 employees, is the largest in Louisiana, and the furloughs will chiefly impact people who cover sports and social events, which have been curtailed.”

In an interview with CNN Business, Kovacs emphasized the “temporarily” of that statement. Kovacs added that less than half of his newsroom’s sports department had been furloughed.

“We think we’ll do well once this is over. We just don’t know what over means,” Kovacs said. “I think this is a case of us wanting to be cautious early about not really understanding the duration of this mostly.”

Some of the remaining sports reporters have switched beats to cover other topics such as the local government.

“[Hurricane] Katrina had this quality too. We had a much bigger staff in those days, but you had some parts of the newspaper where there was no content being created and other parts where there was too much content,” Kovacs said.

What the future holds

Rick Edmonds, media business analyst at Poynter, told CNN Business that he is seeing more newsrooms furlough employees rather than lay them off.

“Furloughs are where you anticipate there’s a pretty good chance you want to bring them back. You don’t want to lose good employees,” Edmonds said. “Do what needs to be done to respond to a sharp drop but not to cripple the strategy.”

Governments in other countries are getting involved to help keep their media industries afloat. The BBC, which is supported by government-mandated fees paid for by UK citizens, is suspending a plan to cut 450 jobs.The cuts would have saved £40 million, but the BBC’s director general said it “would be inappropriate” given the need to cover the crisis. The Canadian government announced on Thursday its plan to spend $30 million on an ad campaign for coronavirus awareness.

“Right now, it is more important than ever that Canadians have access to the latest news and information,” said Canadian Prime Minister Justin Trudeau. “To ensure that journalists can continue to do this vital work, our government is announcing new measures to support them.”

Could federal or state support come to the aid of US newspapers? Not likely, said Joel Kaplan, an associate dean for professional graduate studies and professor of magazine, newspaper and digital journalism at Syracuse University.

“I definitely don’t see the federal government being involved,” Kaplan said. “They are involved to the extent that they contribute to PBS and NPR.” Both NPR and PBS are public broadcasters funded by the US government.

But Kaplan said US media couldget a subscription boost from individuals looking for reliable coronavirus news and businesses running more ads when they reopen.

“We’re in an unbelievable crisis that no one’s ever seen in anyone, who’s alive, lifetime, and guess what their lifeline is? It’s the local news media because it’s the only way they’re keeping informed,” Kaplan said.