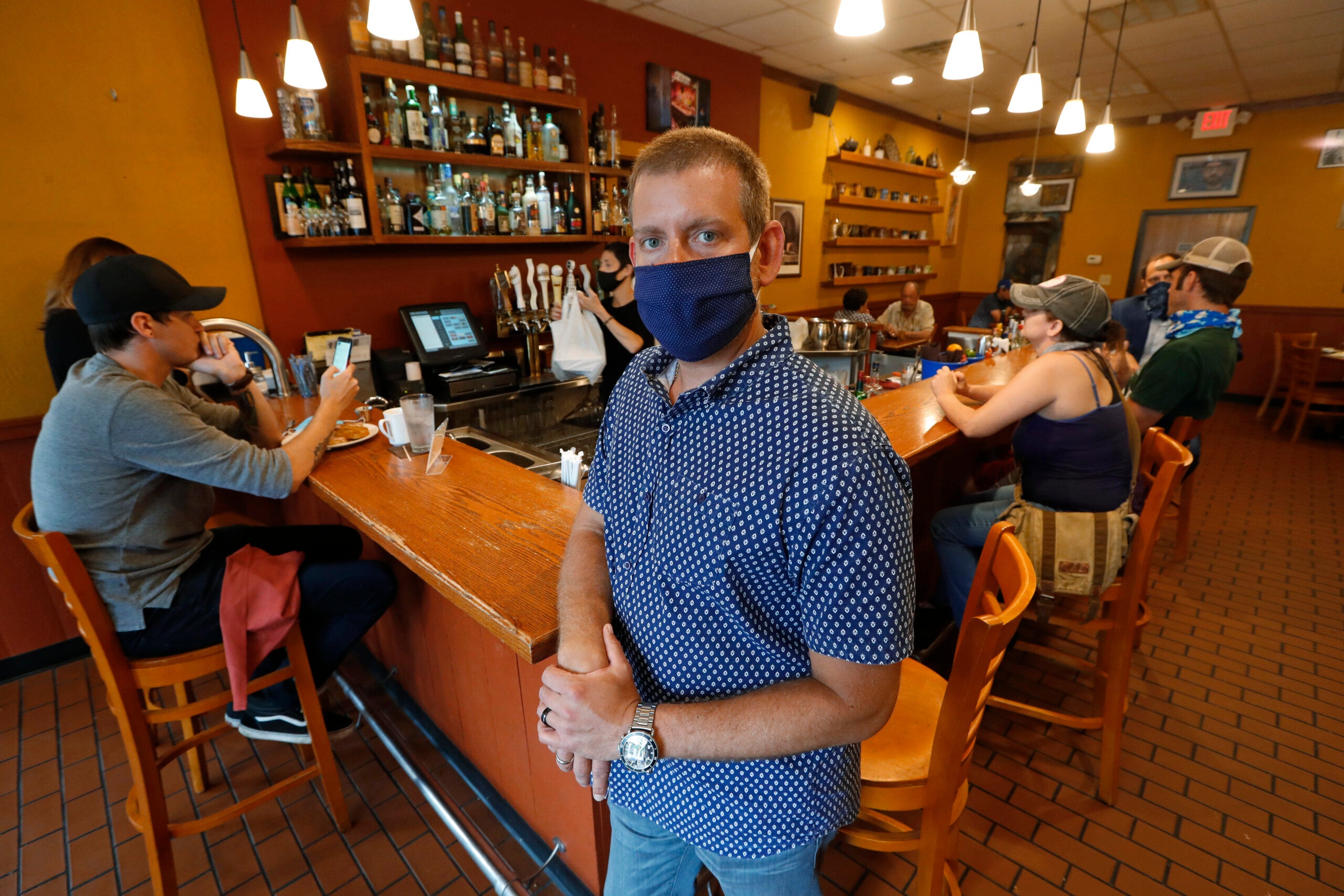 Nick Gavrilides, the owner of the Soup Spoon, poses at one of his two restaurants in Lansing, Mich., Thursday, July 16, 2020. Restaurants, bars and other merchants struggling to stay afloat during the coronavirus pandemic are desperately reaching out for a lifeline from insurers that in turn contend they are being miscast as potential saviors. In one of the first decisions issued on that question, a Michigan state judge sided with an insurer's rejection of a claim for $650,000 for two months of losses that Gavrilides said he suffered at two restaurants. (AP Photo/Paul Sancya)
by: MICHAEL LIEDTKE, AP Business Writer
Posted: Jul 28, 2020 / 04:24 PM EST / Updated: Jul 28, 2020 / 04:24 PM EST

(AP) — Restaurants, bars and other merchants struggling to stay afloat during the coronavirus pandemic are desperately reaching out for a lifeline from insurers that in turn contend they are being miscast as potential saviors.

Shutdowns and crowd restrictions imposed by state and local governments to limit the spread of the virus have resulted in more than $1 trillion in estimated losses so far for thousands of rapidly sinking small businesses.

That has prompted a flood of claims under business interruption insurance policies that have been almost universally rejected for a variety of reasons, including boilerplate provisions inserted by insurers after the SARS outbreak in 2003 to exclude disruptions caused by virus and bacteria.

“This is an existential threat,” said John Houghtaling, a New Orleans attorney who is representing restaurants and other businesses seeking about $8 billion in losses that he estimates they will suffer during the pandemic. “A lot of people who did the right thing and bought this coverage thinking they would be thrown a lifeboat if disaster struck are now being told, ‘Sorry, let the Coast Guard come and get you instead.'”

So many lawsuits have been filed against insurers in the U.S. that a Thursday hearing has been scheduled before a federal judicial panel in Washington to decide how to manage them all in the months — and possibly years — ahead. The panel’s review involves more than 200 federal complaints in addition the other lawsuits filed in state courts by the owners of meat-and-potato cafes as well as some of the nation’s best-known and most exclusive restaurants, such as the French Laundry in Napa Valley’s wine country and California cuisine pioneer Chez Panisse in Berkeley, California, which sued its insurer, AMCO, for breach of contract earlier this month.

“The servers, cooks, farmers, ranchers and other hard-working people in the Chez Panisse family are seeing their livelihoods in jeopardy because AMCO has declined to live up to its responsibilities,” said Alice Waters, Chez Panisse’s owner.

President Donald Trump weighed in on the thorny issue in April when he told reporters that he suspected many insurers were dodging their obligations. “You have people that have never asked for business interruption insurance (payments) and they’ve been paying a lot of money for a lot of years for the privilege of having it,” Trump said. “And then when they finally need it, the insurance company says, ‘We’re not going to give it.’ We can’t let that happen.”

Although sympathetic to their policyholders’ plights, insurers say most business interruption policies were designed to cover shutdowns caused by catastrophes such as hurricanes and terrorist attacks while excluding pandemics that cause widespread losses too staggering to cover, even for an industry sitting on $850 billion in reserves. Only a small number of businesses sought additional coverage that specifically includes losses caused by pandemics, said David Sampson, CEO of the American Property Casualty Insurance Association, an industry trade group.

Even so, Lloyd’s of London has estimated the insurance industry still will pay out $107 billion in pandemic-related claims, more than the combined amounts doled out after the terrorist attacks in September 2001 and Hurricane Katrina in 2005. Besides businesses that bought special coverage, the claims include payouts to major sporting and entertainment events that bought cancellation policies coverage, such as the Wimbledon tennis tournament that is collecting about $140 million under its pandemic policy. Insurers also are paying workers’ compensation claims for employees who get sick on the job.

“This popular meme out there that the insurance industry isn’t paying for losses is just not true,” Sampson said.

But the claims insurers are paying only a small fraction of the $231 billion to $431 billion in monthly losses piling up at U.S. businesses with fewer than 100 employees, according to the industry’s estimates.

At that rate, insurers would have no money left to cover non-pandemic claims for auto accidents, home fires and even damages to businesses during the protests across the country since George Floyd died at the hands of Minneapolis police in May, according to industry consultant Robert Hartwig of the University of South Carolina’s risk and management center.

The denial of business interruption coverage is also hurting bars across the country, many of which haven’t been able to offer pick-up or outside dining like restaurants have. The Ivy Club, which also offers live music during normal times its Albany, California, venue, has had to lay off most of its 20-employee staff since March and is now raising money from community donations while it fights its insurer over its business interruption claim.

“Everything is so uncertain that we really don’t know what we are going to do,” said Summer Gerbing, one of the Ivy Room’s co-owners.

Meanwhile, lawmakers in California and several other states have drawn up legislation that would force insurers to cover the business interruption losses that have piled up since March — a requirement that, if imposed, the industry is already vowing to fight as unconstitutional.

The dispute boils down to whether business interruption policies can be applied to instances when there is no physical damage or destruction to a restaurant or store that is being prevented from conducting business as usual.

In one of the first decisions issued on that question earlier this month, a Michigan state judge sided with an insurer’s rejection of a claim for $650,000 for two months of losses that Nick Gavrilides said he suffered at two restaurants, the Soup Spoon Cafe in Lansing, Michigan, and the Bistro in nearby Williamston, Michigan.

“There has to be something that physically alters the integrity of the property,” Draganchuk concluded in her dismissal of Gavrilides’ case.

Gavrilides is now serving customers inside both restaurants but only at half capacity, a restriction that is making it difficult to stay open even though they are operating with skeletal staffs. The Soup Spoon Cafe now has 12 to 15 employees, down from 40 just before the pandemic.

“It’s literally day to day for us now,” Gavrilides said. “I feel let down for everybody. I thought by paying my premiums for the past 14 years and it my service was ever interrupted, I would be rescued. But I guess that isn’t going to happen now.”