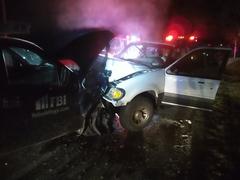 CARROLL COUNTY, Ind. (WISH) – Two people were sent to the hospital after an early morning head-on collision in Carroll County.

When police arrived at the location of the accident, two miles south of Monticello, they found that a white 1998 Mercury SUV had crossed the center line and crashed head-on with a blue 2007 Ford pick-up truck.

Police found that Mylika M. Ross, 18, of Monticello, had fallen asleep behind the wheel of her SUV, and Koty A. Laposi, 25, of Francesville, had attempted swerving and stopping his truck in an effort to bypass the oncoming accident.

Both drivers were wearing seat belts at the time of the accident.