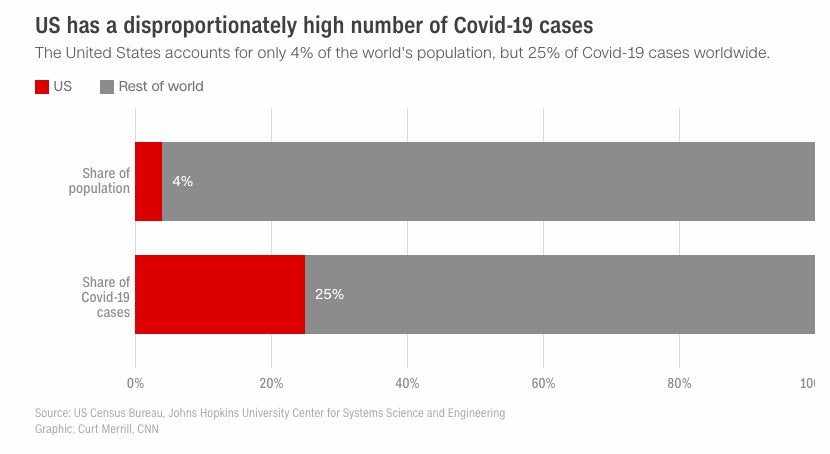 (CNN) — The United States has long prided itself as the world’s shining beacon. But its current status is a much darker one: the globe’s leader in coronavirus cases.

More than 125,000 people have died from Covid-19 in the US, and more than 2.5 million Americans have been infected.

American life has been irrevocably altered by the worst pandemic in a century. And as the country struggles to reopen, cases of Covid-19 have surged again — this time in young people and in states that had previously avoided the brunt of the virus.

Here, in dollars, percentages and — most tragically — lives, is the pandemic’s devastating toll on the US.

The US leads the world in cases and deaths

The US death toll is more than twice as high as that of the country with the second-highest death rate, Brazil. That South American country has reported more than 57,600 deaths, according to Johns Hopkins University’s global case count.

Leaders in both countries have continued to downplay the severity of coronavirus. President Donald Trump has refused to wear masks in public, which research has proven can control the spread of the virus, and has encouraged businesses to resume operations against the guidance of health officials who believe premature reopenings could lead to surges in cases like the US is seeing now.

Brazil President Jair Bolsonaro called coronavirus a “little flu” and maintains that an economic shutdown would be worse for the country than the pandemic. He’s also eschewed mask and social distancing guidance in public and has been criticized for underreporting coronavirus deaths.

More people are infected with and die from coronavirus in the US than anywhere else in the world.

There are a few explanations for this disproportionate share of cases. The initial US response to coronavirus was slowed when the Centers for Disease Control and Prevention’s coronavirus tests failed, delaying testing for weeks. And President Donald Trump throughout February downplayed the threat the virus posed to the US.

Health officials argue that February was a crucial time to contain the virus, and the US missed that window. Health and Human Services Secretary Alex Azar gave a similar warning last week when he told CNN’s Jake Tapper that the “window is closing” for the US to get the pandemic under control.

Over 1,000 Americans die every day in the US from coronavirus

Coronavirus has now killed nearly 126,000 people in the US since the first death was reported in February, according to Johns Hopkins University’s case count. That’s an average of around 1,039 deaths per day.

The number shot up from the end of May, when an average of fewer than 900 people died every day in the US from Covid-19.

Nearly 80% of deaths occur in people over age 65

Older adults are exceedingly vulnerable to severe infection from coronavirus. And according to CDC data, that risk increases with age.

Adults 65 and up account for about 78.9% of all coronavirus deaths in the US but less than 20% of all cases, CDC statistics show. More than 58% of those deaths occurred in Americans over 75. Just over 3% of deaths occurred in people younger than 40.

But more people are becoming infected, contributing to extreme surges in cases in populous states like Florida and Texas. Americans ages 18 to 29 account for almost 18% of coronavirus cases now, CDC data shows.

More Americans have died from coronavirus than in wars in Vietnam, Korea, Iraq and Afghanistan

More than 58,000 Americans died in Vietnam. The US coronavirus death rate is 2.2 times higher.

Almost 37,000 Americans died in Korea. The US coronavirus death rate is more than 3.4 times higher.

4,431 Americans died in Iraq. The US coronavirus death rate is more than 28 times higher.

2,445 Americans died in Afghanistan. The US coronavirus death rate is more than 51 times higher.

More Americans also have died of coronavirus in less than five months than in all of World War I. That conflict took the lives of 116,516 American soldiers.

The US may have missed 90% of people infected with coronavirus, according to an assessment by Dr. Robert Redfield, director of the US Centers for Disease Control and Prevention.

With more than 2.5 million official diagnoses in the US, Redfield’s estimate could mean more than 25 million Americans have been infected.

The lag in reporting is due in part to limited testing during the first few weeks of the pandemic. Now, as more people are getting tested, it’s become clear that a large percentage of those who tested positive did not have any symptoms or had only mild symptoms, Redfield said.

More than 52,428 nursing home deaths have been reported in 41 states, out of 253,938 cases in 43 states, according to data from the Kaiser Family Foundation.

Not all states are reporting infections and deaths in nursing homes and long-term care facilities, so these numbers may be higher on a national scale.

With their highly vulnerable residents, frequent visitors and relatively close quarters, nursing homes are hotbeds for infection. The first significant coronavirus outbreak in the US occurred at a facility in Washington state, where at least 35 people died and dozens more residents and staff were infected.

At least 26,747 Black Americans have died from coronavirus. The virus has killed roughly 1 in 1,500 Black Americans, according to the nonpartisan American Public Media Research Lab.

Black Americans are dying of Covid-19 at a disproportionately high rate: They represent over 12% of the US population but account for nearly a quarter of all US Covid-19 deaths, the research lab reported.

Black Americans’ coronavirus death rate is 2.3 times higher than that of White & Asian Americans and twice as high as the death rate for Latinos.

By comparison, White Americans represent over 62% of the US population but account for just about half of all coronavirus deaths. One in 3,600 White Americans has died, the lab reported.

More than 47 million Americans have filed for unemployment

Fewer people have filed for unemployment benefits in June as businesses reopened, but many millions of Americans are still out of work.

Since mid-March, 47.3 million workers have filed for first-time unemployment benefits.

The US economy had its worst quarter since the 2008 recession

America’s first-quarter GDP, the most expansive measure of the US economy, fell at a 4.8% annualized rate, the US Bureau of Economic Analysis reported in May.

… and the worst isn’t over

A staggering 36 US states reported a rise in cases last week. In Florida, officials recorded 9,585 new cases on Saturday — a single-day record since the start of the pandemic. Just as states were beginning to reopen after lockdown, at least a dozen have halted their plans to further ease restrictions.