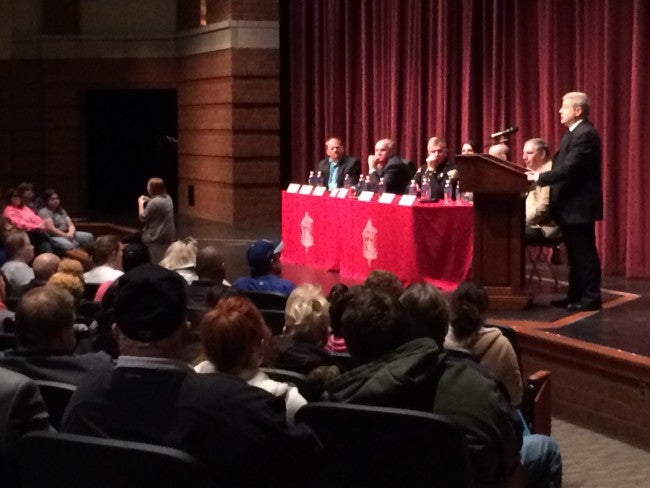 PLAINFIELD, Ind. (WISH) – The suspect in the online threats in Plainfield implied that they were among the crowd at a jam packed community forum, that included police on Tuesday night.

The forum was held by the FBI, Indiana State Police and Plainfield police. Hundreds of people attended to ask questions and get answers concerning safety.

The suspect used Facebook to describe the person they sat next to, what people were wearing and even mocked how law enforcement is handling the investigation.

Chandra Smock has kids that attend the high school and middle school. She has been keeping up with the suspect’s Facebook page.

Plainfield police say they were unaware of the threats, but Smock says the suspect said things only a person in attendance would know.

“Literally reciting things they were saying minutes after they would say it,” Smock said.

Smock went to the meeting to get peace of mind but the newest threats, coupled with an arrest during the forum, have made her even more uneasy.

“He proved a point. These schools are not as secure as they say. He was able to walk in with a loaded handgun. Nobody knew it until he said something,” she said.

Police arrested 37-year-old Ronald Kendall for possession of a firearm on school property, a level 6 felony.

They don’t believe his intentions were malicious, but can’t say why he brought a gun to the forum. Police said although they have increased security during school hours, they did not provide the same level for the meeting.

“Due to the large crowds, we had to balance safety with the practicalities of the fact of getting everyone into the meeting,” said Cpt. Jill Lees of the Plainfield Police Department.

For Smock, safety should never be in the balance. “I just don’t think they’re safe in these schools and last night that point was proven,” Smock said.

Kendall was taken into custody but released the same night. Plainfield Schools are choosing not to comment on the matter.