Family heirloom among dozens of items lost at IMS 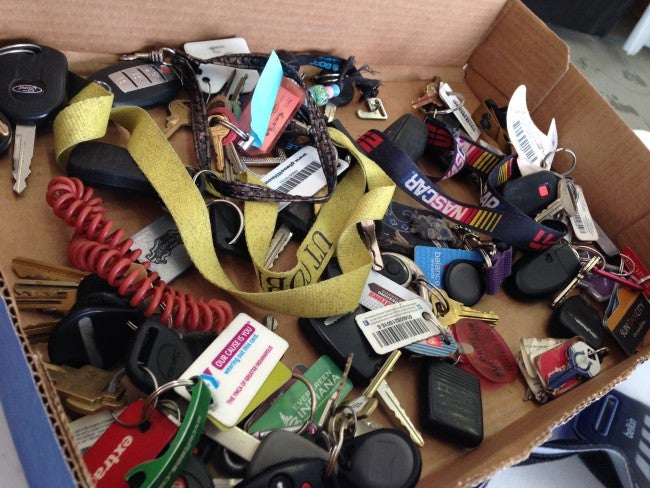 SPEEDWAY, Ind. (WISH) — Racing fans surely brought home exciting memories after attending the Indianapolis 500, but some actually left a few things behind that they likely want to have back.

With hundreds of thousands of people visiting the Indianapolis Motor Speedway in this month, it’s almost a guarantee someone will lose something there.

But mixed in with the obvious like jewelry keys, you’d be surprised what gets lost and sometimes found.

The roar at the track outside of a two-seater tour is now gone with the wind.  All that was left for the drivers Monday was the annual Victory Banquet.

J.R. Hildebrand and his girlfriend Kristin Paine were on hand but something was missing from her hand; her grandmother’s ring that was passed down to her 15 years ago.

“It’s never slipped off before,” she said. “Sunday around 11:00 a.m., I was in the green room with J.R. and looked down and realized it wasn’t on my finger anymore.”

“It was like really in the heat of the moment,” said Hildebrand. “It was like right before driver (introductions) so we’re getting ready to get out there and so it could not have been worse possible timing.”

The couple checked their hotel and tried to piece together the previous night but the ring hasn’t turned up.

“It’s a little bit of a ‘needle in a haystack’ but we’re certainly hoping that we can figure out where it went,” he said.

IMS officials said missing items get turned in at the Pagoda, the museum, and also the administrative office.

But eventually they all end up back at Guest Services along Georgetown Road, just north of 25th Street.

Sandy Forrest supervises the lost and found. Behind her desk you’ll find just about anything people might drop or forget while visiting the Speedway.

Next to the box of keys was a table full of cell phones.

“One year it happened to be pagers when they were real popular,” she joked. “Had lots of those.”

Forrest also had a stack of driver’s licenses, credit cards, and a box of wallets. And after more than two decades of keeping an eye on everything, sometimes you come across an item that truly makes the owner smile.

“My weirdest one was a tooth,” she recalled. “It was several years ago and I happened to have it. So I thought well I’ll mail it to him and see if it might be his and it was his. So he called me said it was his tooth.”

Some items really are valuable like digital cameras. But to Paine, it’s not about the money.

“It’s just a ring that I love and I’ve worn for so long so I feel like it’s kind of a piece of me,” she said. A piece that will surely have Forrest keeping an eye out.

“I try to encourage them that you never know. I said let’s leave a message and your information and you know, something will turn up,” said Forrest. “And lot of times it does (turn up). People are really surprised that it did because there’s honest people in the world. So they’re very happy.”

Forrest said she’s expecting more items to be delivered to the lost and found as crews continue to clean up IMS.

She said anything unclaimed will be donated. Most items are given Goodwill, eyeglasses are recycled, and cell phones are given to women’s shelters.

People who lost items can stop by the Guest Services building or call ahead at 317-492-6125. Forrest said they’ll also mail items to the owner if they’re from out of town.

Hildebrand and Paine are offering a $1,000 reward to whoever finds and returns the ring, no questions asked. They said the ring has a small diamond in the middle, surrounded by a floral design with emeralds.