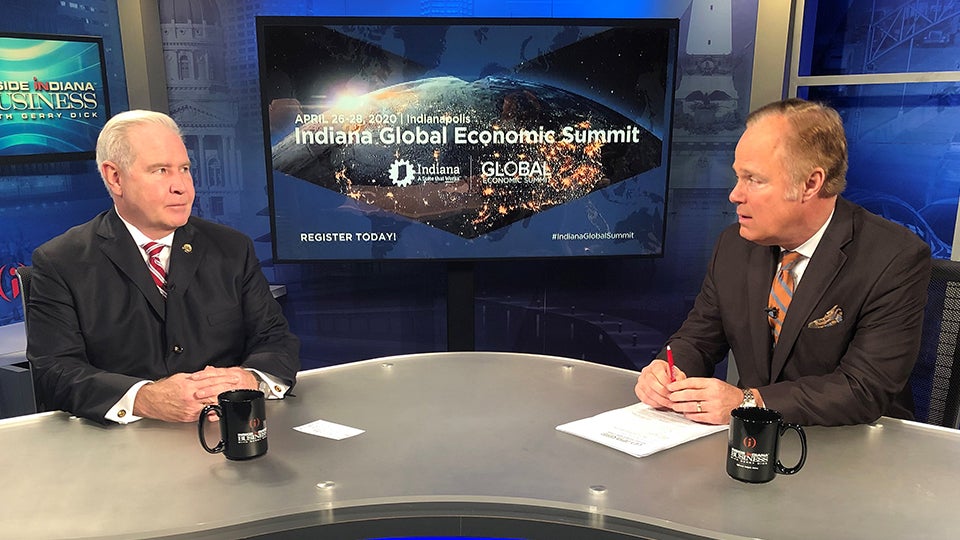 INDIANAPOLIS (Inside INdiana Business) — Indiana’s secretary of commerce says the recently-announced Indiana Global Economic Summit will be the “Business Super Bowl” when it begins next spring. The Indiana Economic Development Corp. last week detailed plans for the summit, which will be held April 26-28 in downtown Indianapolis. Jim Schellinger says the high-profile event will bring together CEOs of various international companies with a presence in Indiana, as well as government, academic and other business leaders in a “think tank” to talk about the future of industry.

Schellinger discussed plans for the event on Inside INdiana Business with Gerry Dick.

“We’ve got some star-studded speakers lined up, mainly because we have so many great relationships now,” said Schellinger. “So the CEO of Saab will be here from Sweden. The CEO of Tate & Lyle will be here from London. Lou Holtz will speak at the lunch on Monday afternoon and the list just goes on and on and on. The governor has made the Indianapolis 500, hosting 18 nations last year in his suite and we are really becoming global, tripling our (foreign direct investment) three times in the last three years.”

Schellinger says the idea for the summit came from the numerous trips he and Governor Eric Holcomb have made to various countries over the past several years. He adds Indianapolis landing the Routes Americas 2020 conference was also a contributing factor in the creation of the summit.

“This is just the next extension to hold an Indiana Global Economic Summit because we are global and the world gets smaller every single day.”

Schellinger says the 2020 could bring continued international investment and more jobs in Indiana.

“We’re up against a lot of things. We’re up against a presidential impeachment and fears of recessions and trade barriers and workforce. But I think we’ve done well this year in spite of that and next year, we’re going to be overcoming some of those and we’ll be right back up.”