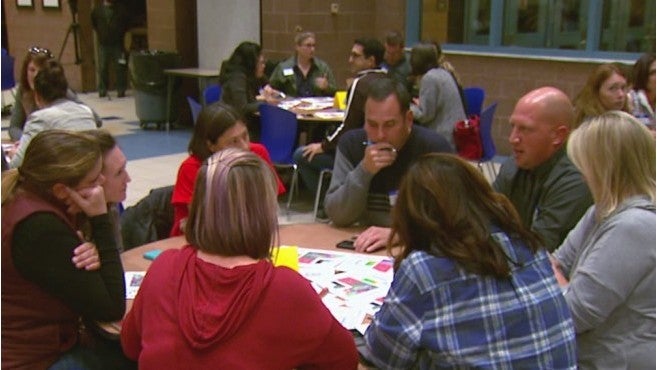 FISHERS, Ind. (WISH) — For the second time since 2015, the Hamilton Southeastern school district will be reshuffling elementary school boundary lines.

The plans to redistrict will impact thousands of students.

More than 200 parents voiced their opinions at a meeting Wednesday evening at Fishers High School.

Parents have been given three choices of how to redistrict HSE schools.

Parents who spoke to News 8 said they are worried, some were even angry, about the choices that many told me offer no right answer.

“People move to Hamilton Southeastern school district for the schools, and that’s really one of the reasons we moved here, for that specific school that our neighborhood is joined with,” said HSE parent Elizabeth Statzer. “I mean, it is what it is. Whatever is best for the kids.”

The spark to redistrict the Hamilton Southeastern lines came as Fishers expanded east with the addition of a 13th elementary school, which is currently being built. The district wants to reduce overcrowding, address the use of portable classrooms and offer improved teacher-to-student ratios.

“We keep changing as a community,” said William Carnes, the interim assistant superintendent of Hamilton Southeastern. “We’re a very dynamic community and as a result we need to rebalance our schools and make sure we have the proper numbers in each of our buildings.”

Each of the three scenarios would move upwards of 3,500 kids to a new school.

It’s a change many parents said they they feel is the wrong answer to a tough question.

“This is just the wrong time in life to be taking kids away from their friends,” said HSE parent Amy Riebe. “As a parent, I struggle with losing all my connections. Now, all my kids are in high school with families that I don’t have a lot of interaction with like I’ve had for the last several years.”

Parents at the meeting offered their feedback about the pros and cons of each plan.

It’s valued input both parents and the district hope will be put to good use when the final decision is made.

“I really get this,” district leader Carnes said. “I understand that this is not about numbers. This is about children. We want to do what’s best for the children, and redistricting is the way that we get there.”

“They keep talking about this being a ‘community process,’” said HSE parent Gwen Keller-Lusk. “But, the communities are built around the schools. When you take the parents that are involved in those schools and you rip them away from that community, you’re in chaos.”

District officials hope to narrow the choices down to one scenario, which they told News 8 will likely be a variation of the current three scenarios after parental input is gathered.

The board is set to vote on the final scenario Dec. 12.

A second community dialogue meeting will be at 6 p.m. Thursday at Hamilton Southeastern High School.