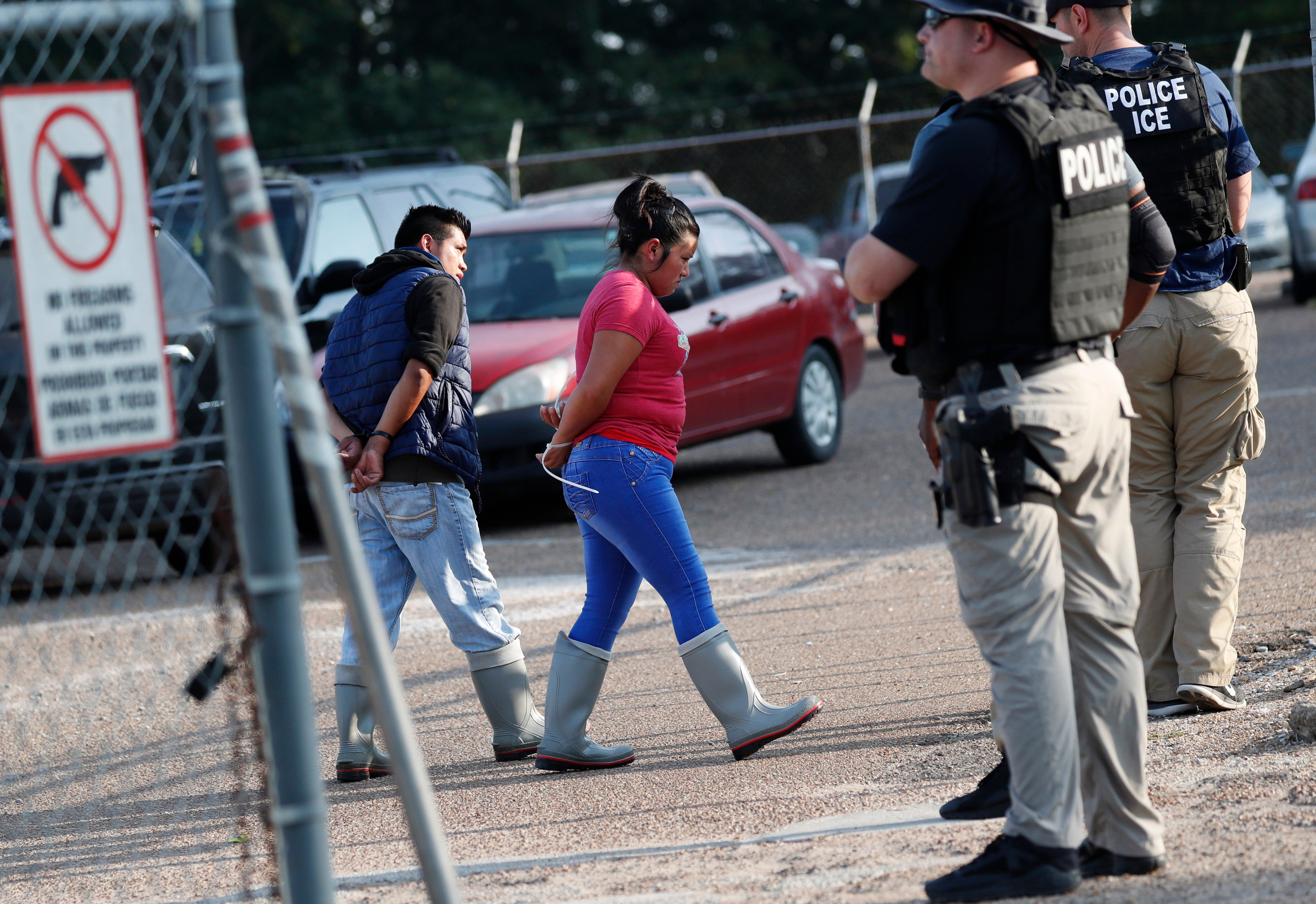 The raids came hours before Trump was to visit El Paso, Texas, to offer sympathy to the majority-Latino city where a man linked to an online screed about a “Hispanic invasion” was charged in a shooting that left 22 people dead in the border city.

Workers filled three buses — two for men and one for women — at a Koch Foods Inc. plant in tiny Morton, 40 miles (64 kilometers) east of Jackson. They were taken to a military hangar to be processed for immigration violations. About 70 family, friends and residents waved goodbye and shouted, “Let them go! Let them go!” Later, two more buses arrived.

A tearful 13-year-old boy whose parents are from Guatemala waved goodbye to his mother, a Koch worker, as he stood beside his father. Some employees tried to flee on foot but were captured in the parking lot.

Workers who were confirmed to have legal status were allowed to leave the plant after having their trunks searched.

“It was a sad situation inside,” said Domingo Candelaria, a legal resident and Koch worker who said authorities checked employees’ identification documents.

The company did not immediately respond to an emailed request for comment.

Bryan Cox, a spokesman for U.S. Immigration and Customs Enforcement, said search warrants were executed at seven locations across Mississippi, targeting several companies. He did not have additional details, including a preliminary estimate of arrests.

The sting was another demonstration of Trump’s signature domestic priority to crack down illegal immigration.

Such large shows of force were common under President George W. Bush, most notably at a kosher meatpacking plant in tiny Postville, Iowa, in 2008. President Barack Obama avoided them, limiting his workplace immigration efforts to low-profile audits that were done outside of public view.

Trump resumed workplace raids, but the months of preparation and hefty resources they require make them rare. Last year, the administration hit a landscaping company near Toledo, Ohio, and a meatpacking plant in eastern Tennessee. The former owner of the Tennessee plant was sentenced to 18 months in prison last month.

A hangar at the Mississippi National Guard in Flowood, near Jackson, was set up with 2,000 meals to process employees for immigration violations on Wednesday. There were seven lines, one for each location that was hit. Buses had been lined up since early in the day to be dispatched to the plants.

“I’ve never done anything like this,” Chris Heck, resident agent in charge of ICE’s Homeland Security Investigations unit in Jackson, told The Associated Press inside the hangar. “This is a very large worksite operation.”

Koch Foods, based in Park Ridge, Illinois, is one of the largest poultry producers in the U.S. and employs about 13,000 people, with operations in Mississippi, Alabama, Georgia, Illinois, Ohio and Tennessee.

Forbes ranks it as the 135th largest privately held company in the U.S., with an estimated $3.2 billion in annual revenue. The Morton plant produces more than 700,000 tons of poultry feed a year, company officials said in February. The company has no relation to prominent conservative political donors and activists Charles and David Koch.

Agents arrived at the Morton plant, passing a chain-link fence with barbed wire on top, with a sign that said the company was hiring. Mike Hurst, the U.S. attorney for Mississippi, was at the scene.

Workers had their wrists tied with plastic bands and were told to deposit personal belongings in clear plastic bags. Agents collected the bags before they boarded buses.

“This will affect the economy,” Maria Isabel Ayala, a child care worker for plant employees, said as the buses left. “Without them here, how will you get your chicken?”

Immigration agents also hit a Peco Foods Inc. plant in Canton, about 35 miles (56 kilometers) north of Jackson. The company, based in Tuscaloosa, Alabama, says it is the eighth-largest poultry producer in the U.S. A company representative did not immediately respond to a telephone call or email seeking comment.