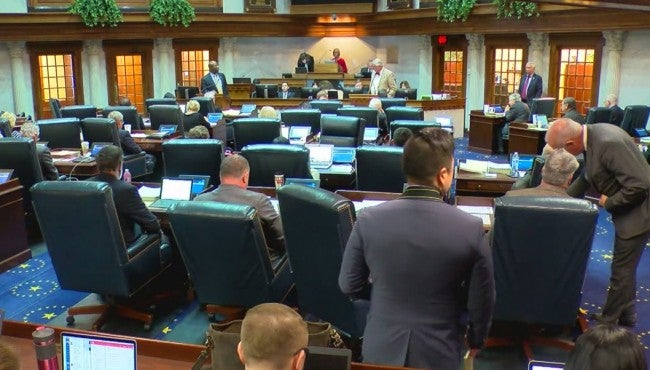 INDIANAPOLIS (WISH) — We’re already at the halfway point of this year’s legislative session.

How are things going? It depends on who you ask.

Republicans who hold the House and Senate majorities are mostly happy with where things stand. On the flipside, Democrats described it in pretty much one word: ugh.

Both sides acknowledge there’s still a lot more work to be done inside the Statehouse.

He points to legislation passed out of the House that includes developing the workforce, fixing the opioid crisis and shoring up K-12 funding.

Bosma, a Republican from Indianapolis, said Tuesday, “Our No. 1 priority was to fund our public school’s funding formula, and which we did for this year and next.”

State Sen. Democratic Leader Tim Lanane, from Anderson, said, “It’s hurting us. Not only because of the reputation of the state of Indiana for failing in this regard. It raises the question ‘what’s wrong with Indiana?’ It’s bad for economic development, too.”

Something state Republicans and Dems seem to agree on so far this session is cannabidiol oil. On Monday, a bill that would formally legalize CBD oil passed the Senate and was transferred to House.

State House Minority Leader Representative Terry Goodin, a Democrat from Austin, said, “I think it’s going to move forward. I think folks have realized this is not marijuana. These folks are not taking CBD oil out back and smoking it and getting high.”

Lifting the ban on carryout package Sunday sales of alcohol has been another talker, too.

Bosma said, “I think Sunday sales is a given. It’s just when is it going to happen and will it get loaded up with something else? Hopefully not.”

Rep. Terry Goodin said, “That was an issue most Hoosiers wanted. Was that the most important thing that should take place, over DCS?”

The Indiana Department of Child Services is a priority, both parties have said. An outside agency is in the middle of its own independent report on Child Services. Still, each party’s tact differs.

Bosma said, “I think we have a systemic issue. That’s what they’re looking at. If it requires legislative action immediately, we’ll take it. If it’s required next year, we’ll take it.”

Lanane said, “We absolutely do need to make sure there’s a level of comfort that we are protecting our children before we leave on March 14. We really need to roll up our sleeves and get this workforce development bill moving.”

“This session, we have passed legislation out of the Senate to continue to fight the opioid epidemic, improve our workforce development efforts and support our schools. … We also passed legislation to improve civil forfeiture laws and allow the carryout sale of alcohol on Sundays. While I am pleased we have moved all of our agenda items out of the Senate, there is much work to be done on these issues as they move through the House of Representatives, and as we consider bills that have come over from our colleagues in the House. I look forward to a collaborative and successful second half as we address issues that are critical to the success of the Hoosier state.”