Indiana trooper reunites with woman after saving her from sinking car 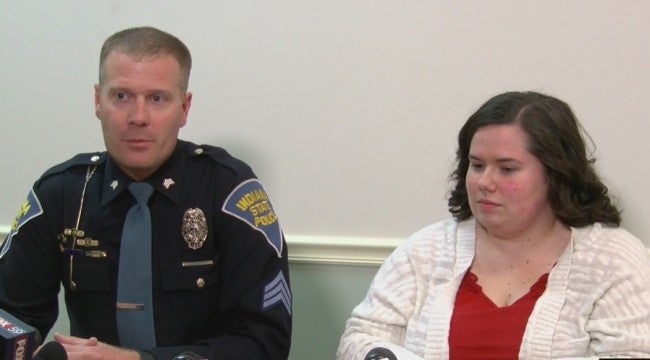 SEYMOUR, Ind. (WISH) — An Indiana state trooper is being hailed as a hero after saving a woman who was trapped inside her car after crashing into a pond in November.

The trooper and the woman had an opportunity to reunite on Wednesday.

They just didn’t know it at the time of the accident.

The duo actually knew each other through mutual church events.

Fleetwood credits her guardian angels for watching over her in an accident that nearly claimed her life.

It all happened on November 22 around 3 p.m.

Fleetwood was driving on State Road 11 just north of Seymour when her contact lens fell out of her eye, causing her vision to get blurry. That’s when she accidentally veered off the road into a pond.

Sgt. Wheeles was nearby investigating a separate accident, and took the call for help.

When he arrived, he said the car was already filling with water and Fleetwood had crawled to the back seat.

He took a hammer that he had grabbed from someone else on the scene, took off his heavier gear, dove into the water, and started knocking out the back window of the car.

It shattered the first time, and he was able to get Fleetwood to safety.

“Just going through my head, was ‘well, this is going to be bad.’ I mean it was just genuine fear, it was genuine ‘OK, I can’t get out.’ The power windows had already stopped working. It was just panic,” said Fleetwood

“Anytime you can help somebody, it’s obviously it makes you feel good. But to find out I knew I actually knew Megan before this, after the fact finding it out that it was her, it was kind of even a little bit more special that I was able to help her,” said Sgt. Wheeles.

Fleetwood was OK. She says her car is totaled, but insurance will cover it.

Sgt. Wheeles’ hand did get hurt during the incident, but he is doing just fine now.

He says he doesn’t consider himself a hero, and says any other trooper would have done the same thing.