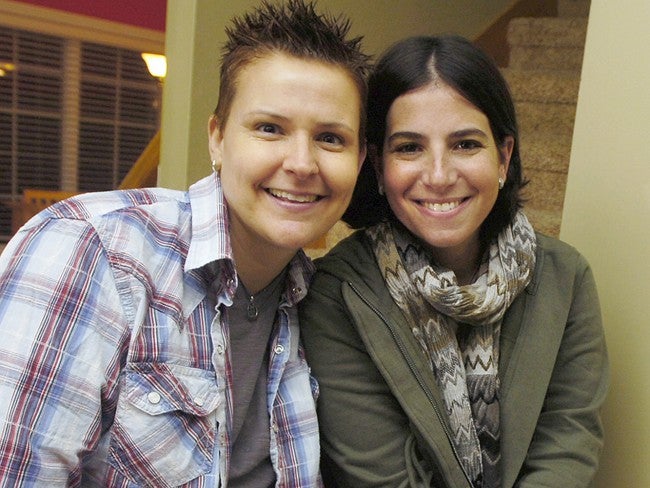 MUNSTER, Ind. (AP) – A terminally ill woman whose desire to have her same-sex marriage recognized by Indiana before she died helped galvanize efforts to overturn the state’s gay marriage ban has lost her battle with cancer.

Quasney and Amy Sandler challenged Indiana’s ban on same-sex marriage as Quasney neared the end of a years long battle with ovarian cancer. Quasney was diagnosed with ovarian cancer in 2009, so two years later, the couple moved to the town of Munster in northwest Indiana, just south of Chicago, where Quasney grew up. The couple, who have two young daughters, wanted them to grow up near Quasney’s family.

The couple had planned to wait until Indiana recognized same-sex marriage before they got married, but the cancer diagnosis changed that. They obtained a civil union in Illinois in 2011 and married in Massachusetts in 2013 near a cottage they visited regularly. They wanted Sandler listed as Quasney’s spouse on her Indiana death certificate to ensure that Sandler and the couple’s two young children received the death benefits to which married couples are entitled.

At the time, Indiana didn’t allow same-sex marriage and refused to recognize such marriages obtained elsewhere.

A federal judge in April granted the couple’s emergency request to have their marriage recognized. Judge Richard Young ruled in June that the state’s gay marriage ban was unconstitutional, sending hundreds of same-sex couples across the state to county clerks’ offices for impromptu weddings. The state appealed Young’s ruling, and the 7th Circuit Court of Appeals granted a stay that put each of those marriages in limbo. But Quasney and Sandler’s union was still recognized, and for a time they remained the only legally married same-sex couple in the state.

Sandler said in an interview with The Associated Press in July that the couple wanted other people to have the same rights.

“It’s something we hope changes with the next decision,” she said. “Because everybody wants to have the freedoms that they deserve.”

The 7th Circuit in September issued a unanimous ruling overturning the gay marriage bans in Indiana and Wisconsin, legalizing gay marriage in those states.

Paul Castillo, an attorney for Lambda Legal, which represented the couple, said Quasney and Sandler made history as they fought for equality, noting that the urgency of their case accelerated a 7th Circuit hearing on a challenge to Wisconsin’s gay marriage challenge as well.

“Niki and Amy and their daughters became Indiana’s first family when they bravely joined Lambda Legal’s marriage case, which meant openly sharing very personal and painful parts of their journey together as Niki battled cancer,” he said. “They brought this case and fought so hard because they loved each other and wanted their daughters to be treated with respect, just like any other family in Indiana.”

He said the couple “never wanted to be alone in recognition of their family.”

She said it was especially impressive because they spent so much time fighting to get same-sex marriages recognized knowing how little time Quasney had left.

“They chose to spend that precious time helping other same-sex couples win those benefits,” she said. “Their name will always be tied to the 7th Circuit case that won same-sex marriage for Indiana.”